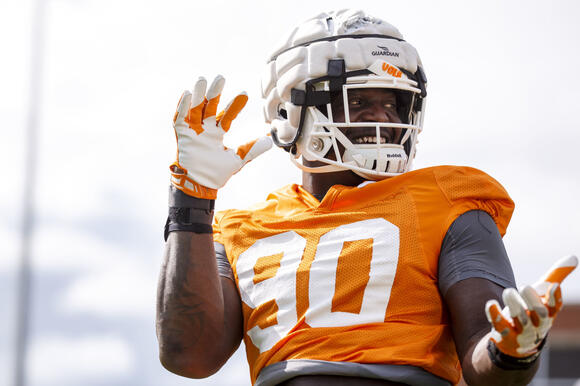 After being in the transfer portal for a month, Greg Emerson has announced his future college destination. Emerson will remain in the Volunteer State and play for Memphis.

Speculation about Emerson's destination had been all over the place prior to the announcement, and Alabama was even rumored as the likely landing place at one point.

Emerson was never able to get going last fall, as then-head coach Jeremy Pruitt said he started the season in “a funk”, but Emerson was a key contributor for the Vols in 2019.

Greg Emerson appeared in 13 games with nine starts, and he was a bright spot on a Tennessee defensive line that surged in the latter half of the season. Emerson recorded 30 tackles, 4.0 TFLS, 2.0 sacks, and he added two pass breakups.

The decision to transfer from Tennessee did not come as a huge shock as Emerson had been openly disgruntled the last couple of weeks on social media by making then deleting tweets about his issues, including one about an unnamed Tennessee coach.

He started in nine of the 22 games he played in as a Volunteer. Due to the COVID-19 eligibility rule, Emerson will have three years of eligibility remaining as a redshirt sophomore. However, he might not be immediately eligible in 2021 without a waiver as he announced his decision to transfer later than the deadline for immediate eligibility.

Coming out of high school in Jackson (Tenn.), Emerson was a four-star recruit and one of the top defensive linemen in the country, according to various recruiting outlets.

KNOXVILLE, Tenn. — If you’ve watched AppleTV+’s hit show Ted Lasso, you’ve probably heard one of the football-turned-fútbol coach’s most prominent lines from Season 1:. "If God would have wanted games to end in a tie, she wouldn't have invented numbers." Evidently, Tennessee (8-1-1) felt the same about its SEC...
TENNESSEE STATE・15 HOURS AGO
VolunteerCountry

It's been almost 20 years since Tennessee beat Florida in The Swamp. The last time the Vols did, though, former Tennessee running back Jabari Davis was a part of the effort. In his UT career, Davis amassed 1,224 rushing yards with 22 touchdowns. This week, the self-proclaimed #GatorKilla was nice...
NFL・5 HOURS AGO
VolunteerCountry

Unfortunately for Josh Heupel, his team is banged up heading into Florida week. We take a look at the injury report here. Cooper Mays- Maybe the most significant injury for the Vols so far this fall, Mays has been missed since leaving the first game of the season as the Vols offensive line has struggled without him. Heupel stated on Thursday afternoon that he anticipates Mays to play against Florida, which would be huge for Tennessee's offensive attack.
FLORIDA STATE・11 HOURS AGO
VolunteerCountry

Vols Expected to Have OL Cooper Mays Back for Florida Game

Tennessee has been without Sophomore starting Center Cooper Mays since early in the Bowling Green matchup. Mays left the contest with an apparent ankle injury and has not returned to action since, which caused Tennessee to have to reshuffle its offensive front multiple times, including adding Ollie Lane and Kingston Harris to the rotation more.
FLORIDA STATE・1 DAY AGO

How to Watch, Listen: Tennessee-Florida

Tennessee will go on the road for the first time this season as they travel to Gainesville to take on Dan Mullen's team at Ben Hill Griffin Stadium on Saturday night. Both teams are 2-1 on the season and will look to avoid falling to .500. Here is how you...
FOOTBALL・11 HOURS AGO
VolunteerCountry

Tennessee has released their 2022 football schedule, which you can view below. Below is a full press release from Tennessee. “Home matchups against Florida and Alabama and rare road trips to Pittsburgh and LSU highlight the 2022 Tennessee football schedule as the Southeastern Conference unveiled the full slate of games on Tuesday evening.
TENNESSEE STATE・2 DAYS AGO
VolunteerCountry

With NIL becoming more commonplace across college sports, it’s no surprise that Tennessee athletes have continued to take advantage of new opportunities. One such example is Vols wide receiver Velus Jones Jr., who on Tuesday announced a new partnership with the Down Syndrome Awareness Group of East Tennessee. One lucky...
TENNESSEE STATE・2 DAYS AGO
VolunteerCountry

Heupel: Tennessee Focusing on Florida’s Environment and Option Ahead of Showdown in Gainesville

KNOXVILLE, Tenn. — Tennessee football and basketball fans will have a new way of buying tickets for 2022, the university announced Wednesday. The new process will be a result of “several months of thoughtful analysis,” per Tennessee’s release, with more equitable and affordable options inside Neyland Stadium. There will be...
TENNESSEE STATE・2 DAYS AGO
VolunteerCountry

Phillip Mason is a 6-foot-1 and 210-pound linebacker prospect from Ridgeland High School (Ga.) in the 2022 recruiting class. Mason just recently transferred to Ridgeland over the summer from East Hamilton High School (Tenn.) and has started seeing some college attention since. Mason caught up with Sports Illustrated to discuss...
COLLEGE SPORTS・3 DAYS AGO
VolunteerCountry

Tennessee is set to play Florida at 7 PM ET on ESPN on Saturday night. There were plenty of questions for Volunteers Head Coach Josh Heupel during his final media availability of the week. You can watch the availability above.
COLLEGE SPORTS・1 DAY AGO
VolunteerCountry

VR2 on SI Podcast: Brief Recap of UT-TTU and Look Ahead to Florida

Host Jack Foster and Jake Nichols tell you everything you need to know from Tennessee's 56-0 blowout of Tennessee Tech, focusing on which part of the Vols' game served as confidence boosters heading into SEC play. Florida us up this Saturday, and while Jake is not optimistic about the chances to win on the road, if Tennessee can connect on deep throws, have a strong pass-rush presence and run the ball efficiently, the Vols can make strides as a team in the Swamp. Listen for all that and more in the latest edition of the VR2 on SI Podcast! (See below)
FLORIDA STATE・2 DAYS AGO

KNOXVILLE, Tenn. — After Tennessee’s 56-0 win over Tennessee Tech on Saturday, Vols wide receiver Velus Jones Jr. fielded a question about his gold necklace. He smiled before issuing a response. Because there, locked into the chain that rested on Jones’ Nike shirt, hung a tiny golden goat — a...
KNOXVILLE, TN・4 DAYS AGO
VolunteerCountry

Tennessee blew out Tennessee Tech in their Week 3 matchup, as expected. The Vols out-gained the Golden Eagles 417 yards to 179, and Tim Banks' unit got four interceptions, making for a complete route of Tennessee Tech. While the win was a team effort that saw multiple facets of Josh Heupel's squad execute well, three individuals stood out and will be gifted game balls from VR2.
COLLEGE SPORTS・5 DAYS AGO
VolunteerCountry

Tennessee (2-1) has scored more than 30 points in each of its first three games, but the Vols are not receiving any love heading into the first week of SEC play. Florida (2-1) is coming off a narrow defeat to top-ranked Alabama and the Gators are viewed to bounce back in a big way, according to the Vegas oddsmakers.
FLORIDA STATE・5 DAYS AGO
VolunteerCountry

What to Watch For: Tennessee-Tennessee Tech

Tennessee (1-1) will host Tennessee Tech (0-2) for what should be a tuneup game before SEC play kicks off with a week four trip to Gainesville. While this game does not likely bring the intrigue that last week's Johnny Major's Classic did, but there is still plenty to watch in this matchup. We take a look at several things we will keep a close eye on here.
COLLEGE SPORTS・6 DAYS AGO

Just In: Vols Without Multiple Key Players Against Tennessee Tech

Knoxville, Tenn.— After getting injured in the season opener against Bowling Green, Tennessee starting center Cooper Mays has not been on the field since. It appears the Knoxville native will sit out yet again in Week 3, as Mays is not dressed out or taking part in pregame warm-ups on the field.
KNOXVILLE, TN・6 DAYS AGO
VolunteerCountry

Tennessee (1-1) will host Tennessee Tech (0-2) for what should be a tuneup game before SEC play kicks off with a week four trip to Gainesville. While this game does not likely bring the intrigue that last week's Johnny Major's Classic did, it will still be played, but we decided to do a bold prediction for the contest instead of just our standard pick the winner piece.
TENNESSEE STATE・6 DAYS AGO
VolunteerCountry

Nichols: In Thumping of Tennessee Tech, Josh Heupel's Vols Show Keys and Concerns That Will Be Pivotal in The Swamp

KNOXVILLE, Tenn. -- Josh Heupel must have seen a matchup he liked with Mississippi State transfer JaVonta Payton on Saturday. Virginia Tech transfer Hendon Hooker -- who started in place of the injured Joe Milton III -- tried Payton twice on the Vols' first possession against Tennessee Tech. The first pass fell through Payton's hands as he streaked down the field, while the second attempt sailed over the former Bulldog's head.
KNOXVILLE, TN・6 DAYS AGO
VolunteerCountry

Former Tennessee small forward has been signed by the Orlando Magic training camp roster, per @Magic_PR. The Orlando Magic Public Relations Twitter page made the signing official with the press release below:. After his collegiate career on Rocky Top, the London, England native was drafted by the Philadelphia 76ers then...
NBA・2 DAYS AGO