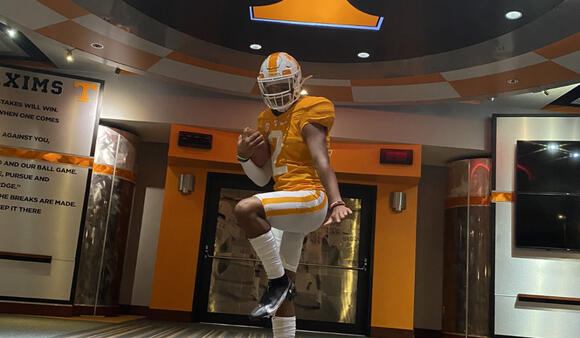 Tennessee hosted 2024 Catawba Ridge (S.C.) quarterback Jadyn Davis on Wednesday. The elite signal-caller is widely viewed as one of the best at the position regardless of class, and the trip to Knoxville marked his first opportunity to connect with Josh Heupel’s staff. Following the visit, Davis discussed the trip with VR2 on SI.

“I just enjoyed interacting with everyone, honestly,” Davis said. “They showed me and my brother great hospitality.”

Davis picked up an offer from Tennessee earlier this year, and he is currently the only player on the board for his class.

Davis lived in the state for a short time, so he is familiar with the scenery, but he was impressed by the campus in Knoxville.

“The campus is beautiful,” he said. “I loved it. I like how everything that an athlete would need is literally right next to each other. My favorite room by far was the Peyton Manning room. Hope to have my own room like that one day.”

Davis referred to Manning as the “GOAT” in an interview with VR2 on SI following his offer from the Tennessee staff, so checking off that room was a big moment for him.

The prized talent had an opportunity to connect with Josh Heupel and Joey Halzle during the trip. He got to see firsthand an example of their work at the position and how they have developed the players in their system.

“Coach Heupel, Coach Halzle, and I had great conversation,” Davis said. “Just showing me how they have developed Quarterbacks by showing how the Quarterback was the season before they got there, then showing me the drills and the process, and then showing the following season. You could really see the improvement.”

Davis, who holds offers from multiple major powers, has made several stops since the recruiting world re-opened, and this trip to Knoxville opened the door for the Vols to join the race for his services as he plans to return soon.

“I definitely have plans to return to Tennessee,” he said. “Coach Heupel told me he wanted me to come to a game this fall and then during the off-season where we could go hang out at a basketball game. They definitely impressed me and did enough to be a serious contender.”

Below is a look at Davis’s highlights.

The story of Tennessee’s 41-34 loss to Pittsburgh on Saturday featured many twists and turns, including penalty woes, lead changes and special teams success, but one in particular stood out: the quarterback situation. Redshirt junior quarterback Joe Milton started his second consecutive game for Tennessee (1-1) on Saturday, but struggled...
COLLEGE SPORTS・10 DAYS AGO
VolunteerCountry

Does Josh Heupel have quarterback controversy on his hands? He says no, but there are certainly several questions left to be answered at the position. Heupel's backfield is also limited in numbers with Jabari Small and Tiyon Evans, Tennessee's 1-2 punch both battling through their own problems. Heupel addressed each topic during today's SEC teleconference.
NFL・6 DAYS AGO
rockytopinsider.com

The inaugural Johnny Majors Classic is officially over as the visiting Pittsburgh Panthers took the victory against the Tennessee Volunteers. The Vols began the game on fire thanks to a blocked punt and early touchdown. However, Pittsburgh took a lead and shut Tennessee down each time they were within striking distance.
COLLEGE SPORTS・10 DAYS AGO
247Sports

Josh Heupel wasn’t about to layout all the details that go into how he calls his offense while he was standing in front of the Knoxville Quarterback Club on Monday. “This is on camera,” the first-year Tennessee coach said during his first appearance in front of the group, “so I won’t be able to.”
COLLEGE SPORTS・8 DAYS AGO

KNOXVILLE, Tenn. (AP) — Tennessee appears to have another quarterback quandary on its hands, not that coach Josh Heupel is tipping his hand just yet. Heupel won’t say whether Joe Milton or Hendon Hooker will start for Tennessee on Saturday against Tennessee Tech. The first-year coach also isn’t saying if Milton is physically available after going down with what appeared to be a lower leg injury when sacked in the second quarter of a 41-34 loss to Pitt.
FOOTBALL・5 DAYS AGO
247Sports

Heupel declines to 'speak in hypotheticals' about Vols' QB situation

Tennessee quarterback Joe Milton III started the Vols’ first two games this season, but he sat out Saturday’s game against Tennessee Tech after suffering a lower-body injury a week earlier during Tennessee’s loss to Pittsburgh. With the Vols now preparing to travel to rival Florida, first-year Tennessee coach Josh Heupel isn’t ready to name a starter for this week.
COLLEGE SPORTS・1 DAY AGO
The Spun

Earlier this year, the NFL announced that its loosening up its restrictions regarding jersey numbers. That decision didn’t go over well with Tampa Bay Buccaneers quarterback Tom Brady. Brady vented about the NFL’s jersey number rule prior to the Buccaneers’ season opener. He believes it’ll give the defense an unfair...
NFL・7 DAYS AGO
SB Nation

It’s been almost two weeks since the Patriots cut Cam Newton, and now the QB has responded in one of the most frank, fascinating interviews pro football has ever seen. On Friday morning Newton released a 45 minute video titled “My Side Of The Story,” where he sat down with his father, Cecil Newton Sr. to discuss his process of getting cut.
NFL・11 DAYS AGO

During a recent interview with the Tampa Bay Times, Buccaneers quarterback Tom Brady revealed that he tested positive for COVID-19 following the Buc’s Super Bowl Parade. Brady also told the Tampa Bay Times that he believes COVID will be a bigger problem in 2021 than it was in 2020. “You...
NFL・16 DAYS AGO
FanSided

3 quarterbacks the Dolphins can replace Tua Tagovailoa with

With Tua Tagovailoa exiting Sunday’s game with a rib injury and perhaps facing some missed time, here are three replacement options for the Dolphins. In the first quarter of Sunday’s game against the Buffalo Bils, Miami Dolphins quarterback Tua Tagovailoa was carted off after taking a hard hit. Tom Pelissero of NFL Network reported the second-year signal caller suffered bruised ribs with an MRI coming Monday.
NFL・2 DAYS AGO
The Spun

Tom Brady Reacts To What Bill Belichick Said About Him

Earlier this month, Tampa Bay Buccaneers quarterback Tom Brady said he believed he could play until the age of 50. “Can Tom Brady play until he’s 50 years old?” Rob Gronkowski asked. “Wow, that seems to be the really hot question lately. I mean, I don’t find it so difficult....
NFL・1 DAY AGO
Sports Illustrated

Bill Belichick May Have Outsmarted Everyone Again

The Patriots are now all-in on Mac Jones, and they may have found a potential star hiding in plain sight.
NFL・21 DAYS AGO

Tennessee Titans wide receiver Julio Jones got hit with a pretty hefty fine from the NFL on Saturday. Jones was called for unnecessary roughness during the Titans’ blowout loss to the Arizona Cardinals last weekend. The NFL has fined Jones $10,815 as a result, per NFL insider Tom Pelissero. “The...
NFL・3 DAYS AGO
The Spun

Times are tough at the Florida State football program right now. The Seminoles fell to 0-3 on the season with Saturday’s loss to Wake Forest. Florida State opened the season with a close loss to Notre Dame, appearing to show some improvement. However, Mike Norvell’s team was upset by Jacksonville State in Week 2 and then lost to the Demon Deacons in Week 3.
FLORIDA STATE・2 DAYS AGO
Black Enterprise

Michael Strahan and Men’s Wearhouse teamed up to design custom-made suits for Jackson State University’s football team. With fellow NFL legend Deion Sanders as the new head coach, Strahan was happy to help the HBCU get the recognition and resources they deserve. As an HBCU alum of Texas Southern University, Strahan was “extremely happy” to see Sanders take on his first collegiate head coach position at a historically Black college and was eager to help in any way he could.
NFL・14 DAYS AGO
The Spun

Prior to the Cowboys’ Week 2 win, they had yet to finalize their kicker position. Then, Greg Zuerlein went out and nailed a game-winning 56-yard field goal to beat the Chargers. Competition closed. The Cowboys released kicker Lirim Hajrullahu on Tuesday. He had been on the practice squad just in...
NFL・16 HOURS AGO

Few NFL players, if any, had has much swag during their playing days as Deion Sanders. It makes sense that he would bring that to his coaching days. Jackson State, the college football program led by the former NFL star, is opening its 2021 regular season against Florida A&M on Sunday afternoon. The Tigers lead the Rattlers, 7-6, on Sunday evening.
NFL・16 DAYS AGO
The Spun

The recruitment of five-star quarterback prospect Arch Manning continues to heat up. Manning, the son of Cooper and the nephew of Peyton and Eli, is the No. 1 recruit in the 2023 class. He’s already received scholarship offers from several major programs. The Isidore Newman prospect has scheduled visits to...
FOOTBALL・2 DAYS AGO
Dolphin Nation

In a new survey, an anonymous NFL agent offered the prediction that Miami Dolphins quarterback Tua Tagovailoa will prove to be a disappointment. He went on to predict that Tagovailoa will eventually be replaced by the team. Ben Standig of The Athletic showed comments from numerous NFL agents. One agent...
NFL・28 DAYS AGO