McConnell: 'It never occurred to me' convincing Americans to get vaccinated would be difficult 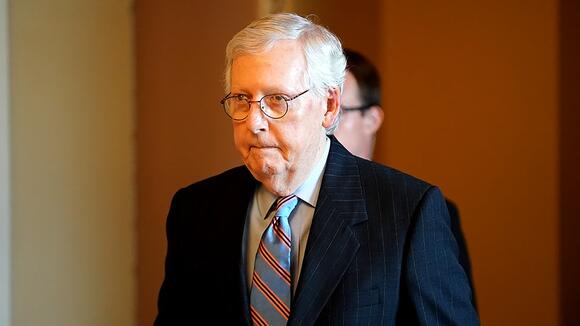 Senate Minority Leader Mitch McConnell (R-Ky.) said on Wednesday that he did not realize it would be difficult to convince Americans to take the COVID-19 vaccine as the nation deals with soaring cases occurring in the unvaccinated.

“Here, we did — developed three highly effective vaccines in under one year. Honestly, it never occurred to me we would have difficulty getting people to take the vaccine,” McConnell told Fox Business Network host Larry Kudlow, a former White House official.

“So, clearly, we have got a job to do to try to convince reluctant Americans of all types who seem to be holding back, unconvinced that this is the right thing to do,” McConnell added.

McConnell said that the subject of vaccines hits close to home for him as a polio survivor, noting it took decades to develop vaccines for it.

McConnell’s comments come as the number of vaccinated Americans reaches a plateau. The U.S. was not able to meet an earlier goal by President Biden to have 70 percent of American adults get at least one shot of the vaccine by July 4.

According to data from the Centers for Disease Control and Prevention, 69 percent of Americans aged 18 and older have received at least one dose of the vaccine and 60 percent are fully vaccinated.

States such as Florida and Arkansas have seen recent surges in COVID-19 cases as pockets of communities remain unvaccinated and the delta variant spreads rapidly.

"There is bad advice out there, you know. Apparently you see that all over the place: people practicing medicine without a license, giving bad advice. And that bad advice should be ignored," McConnell told Reuters.

McConnell has been one of the few consistent voices within the GOP encouraging people to be vaccinated amid a political divide on the issue.

McConnell is determined to resist Democratic pressure to raise the debt ceiling alongside them. The showdown could derail the economic recovery.
CONGRESS & COURTS・1 DAY AGO
Fox News

"I find myself in an impossible situation," protested Rep. Stephanie Murphy, D-Fla., last Thursday afternoon. The Florida Democrat is a moderate. A leader of the fiscally-conscious Blue Dog Coalition. And, Murphy’s "impossible situation" crystallized the plight facing congressional Democrats in their quest to pass the $3.5 trillion social spending bill.
CONGRESS & COURTS・23 HOURS AGO
blogforarizona.net

It is Time for Some Democrats to Cut the Crap and Get a Deal Done for the American People. When I was growing up, my dad stressed the importance of always being united as a family when facing adversity or when one member is wrongly or rightly attacked. This is...
CONGRESS & COURTS・2 DAYS AGO
Fox News

The Senate is waiting with bated breath as the Senate parliamentarian considers whether Democrats are allowed to include immigration reform in their $3.5 trillion reconciliation bill, a move that would allow Democrats to circumvent the filibuster and the opposing party on the decades-old issue. Democrats made their case this week...
CONGRESS & COURTS・1 DAY AGO

Sen. John Barrasso: Biden and Democrats are the Party of chaos

For eight months, the Democrats have been in control of the White House and Congress. In that time, America has veered from calamity to calamity. If there’s one thing that is now clear, it is that the Democrats specialize in creating chaos. Since January, we’ve gone from "the adults are...
CONGRESS & COURTS・1 DAY AGO
Washington Post

An earlier version of this story misspelled Sen. Raphael Warnock (D-Ga.)'s first name as Rafael. In the middle of a brazen nationwide assault on voting rights, of a kind we have not seen since Jim Crow was established after the Civil War, some are skeptical that Democrats in Washington will respond. If they don’t, allowing the filibuster to block voting rights legislation, it will consign the party (and its majority of U.S. voters) to possible permanent minority status.
CONGRESS & COURTS・2 DAYS AGO
Phys.org

Vaccine refusal is a major reason COVID-19 infections continue to surge in the U.S. Safe and effective vaccines have been available for months, but as of mid-September 2021, only 65% of eligible American adults are fully vaccinated. In many areas, a majority of eligible adults haven't taken advantage of the opportunity to get vaccinated.
U.S. POLITICS・2 HOURS AGO
MSNBC

Three months ago, West Virginia Sen. Joe Manchin announced his opposition to the For the People Act, but he nevertheless tried to be constructive. The conservative Democrat said while he couldn't back his party's democracy-reform package, he could support a compromise measure to protect voting rights, and he released a blueprint designed to garner bipartisan backing.
CONGRESS & COURTS・1 DAY AGO

The two senators met Tuesday afternoon, after McConnell promised that no Republicans would support the legislation.
CONGRESS & COURTS・1 DAY AGO
Newsweek

The proposal from House Democrats would raise the corporate tax rate to 26.5 percent for the richest businesses and impose an additional surtax on individuals who make more than $5 million.
CONGRESS & COURTS・2 DAYS AGO
Washington Post

A good sign that the political right recognizes that the shaky state of the coronavirus pandemic is a function of the unvaccinated is that it is energetically trying to cast that group as largely composed of members of the political left. Former president Donald Trump, for example, told Fox News...
POTUS・2 DAYS AGO
Fox News

Kamala Harris questioned after announcing steps for ‘protecting the vaccinated’: ‘Doesn’t the vax do that?’

Vice President Kamala Harris raised eyebrows on Sunday with her tweet urging Americans to help protect already vaccinated people in order to end the COVID-19 pandemic. "By vaccinating the unvaccinated, increasing our testing and masking, and protecting the vaccinated, we can end this pandemic. That’s exactly what we are committed to doing," Harris tweeted.
U.S. POLITICS・3 DAYS AGO

What pure, infuriating, blatant hypocrisy. At the 20th anniversary memorial for 9/11, top Democratic politicians all wore masks for a photo op. Then, as soon as the television cameras were off, the masks came off. Sen. Kirsten Gillibrand and Gov. Kathy Hochul are masked one minute, unmasked and talking the next. Speaker Nancy Pelosi has hers off.
CONGRESS & COURTS・2 DAYS AGO
Finger Lakes Times

Sen. Mitch McConnell said Tuesday he wants his position on the budget to be "crystal clear... Republicans are united in opposition to raising the debt ceiling not because it doesn't need to be done." Sen. Chuck Schumer said that was "dangerous." (Sept. 14) Subscribe for more Breaking News: http://smarturl.it/AssociatedPress. Website:...
CONGRESS & COURTS・1 DAY AGO
spectrumnews1.com

In Focus: Sen. McConnell explains his decision to ramp up awareness on COVID vaccination efforts

KENTUCKY — During this segment of In Focus Kentucky, U.S. Senate Republican Leader Mitch McConnell, who also is Kentucky's longest-serving U.S. senator ever, comments on a variety of topics and issues, including his recent decision to become more vocal on the importance of getting vaccinated to prevent the spread of COVID-19. "Look, where we end this pandemic is for people to get vaccinated. I was a polio victim when I was a kid, and studied that disease and how long it took to develop the two vaccines that ultimately eliminated polio, actually, in the whole world. 50 years. We developed three effective vaccines in less than one year. A modern medical miracle. It never occurred to me that we'd have difficulty getting people to take the shots. I thought they'd be lined up and excited about it. So we clearly have a challenge here and convincing Americans to take the vaccine, and I think the best argument, not opinion, but fact, is that with this resurgence, 90% of the people in the hospital are unvaccinated. This is a crisis of the unvaccinated. So, that's not an opinion, that's a fact. And we know the only way we finally end this pandemic is to get enough Americans vaccinated to produce what we call herd immunity. Enough people to finally put this in the rearview mirror, and it's been a struggle," explained McConnell.
CONGRESS & COURTS・1 DAY AGO
POLITICO

POLITICO Playbook PM: Schumer and McConnell dig in on the debt ceiling

Lots of news this afternoon. Get used to it. It will be like this all month. Senate Majority Leader CHUCK SCHUMER spoke on the Senate floor earlier today. Highlights:. — Reconciliation update: Schumer says committees in the House and Senate will indeed meet their Wednesday deadline for having legislative text. The next step is for chairs to brief the entire caucus, which will offer feedback.
CONGRESS & COURTS・1 DAY AGO

The Senate's top Republican said Tuesday the GOP will not vote for a stopgap spending bill needed to fund the government later this month if Democrats add on authority to raise the nation's borrowing limit. "They'll have to do that on their own," Sen. Minority Leader Mitch McConnell told reporters.
CONGRESS & COURTS・1 DAY AGO
erienewsnow.com

Senate Majority Leader Chuck Schumer did not rule out including raising the nation's borrowing limit in the Democrats' massive economic plan which is currently being written. "We are discussing all of the options with the President and Speaker Pelosi," Schumer said when asked if including the debt ceiling in reconciliation was an option.
CONGRESS & COURTS・1 DAY AGO
Kentucky New Era

U.S. Senate Republican Leader Mitch McConnell (R-KY) delivered the following remarks today on the Senate floor regarding the Democrats’ reckless tax and spending spree:. “The international stage isn’t the only area where Biden Administration policies have caused damage that was both foreseeable and foreseen. “Back in the springtime, Washington Democrats...
WASHINGTON STATE・2 DAYS AGO
Reason.com

President Joe Biden's national vaccine mandate sparked a lot of debate and set political seismometers jumping even more frantically than usual. Most commentary has focused on two issues: Is forcing people to take vaccines a good idea, and will the courts sign off on the government's authority to do so? Those are great discussions to have, though anything involving "forcing people" should be a non-starter by default. But another important question is raised by the president's gambit to displace the Afghanistan fiasco from the headlines: How, in the United States, can one guy just impose his preferred policies, whether they're good, bad, or indifferent?
U.S. POLITICS・3 DAYS AGO