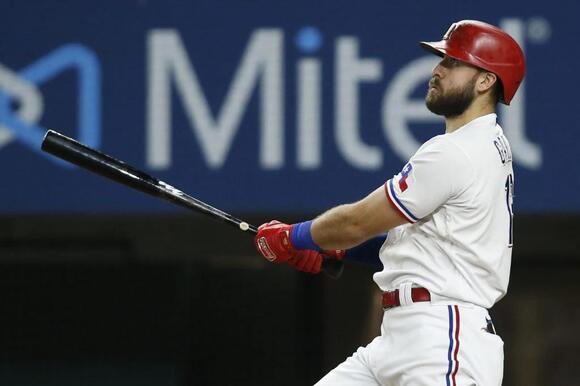 Veteran slugger and two-time All-Star Joey Gallo will now be part of the American League Playoff race after wasting away with the Texas Rangers over the past several years.

Multiple media reports indicate that the 27-year-old Gallo has been traded to the New York Yankees.

This is an absolutely massive move for New York as the team attempts to remain alive in the playoff race amid a season that has been defined by inconsistencies at the plate.

Joey Gallo should more than help in this regard. He’s hitting .223 with 25 homers and 55 RBI on the campaign. The slugger has also walked a league-high 74 times and has seen his strikeout rate plummet compared to previous years.

To put this acquisition into perspective, all Yankees left-handed batters have put up 22 homers in 722 at-bats this season . Needless to say, a move of this ilk was needed for a team that entered Wednesday’s action with a 52-47 record and in third place in the American League East.

The move also comes hours after the Oakland Athletics pulled off their own blockbuster for Starling Marte. Oakland sits ahead of New York in the race for the second wildcard spot in the American League.

Long-term, Joey Gallo is arbitration-eligible next season. This means the Yankees did not simply acquire a rental.

As noted above, Gallo is not simply a rental for the Yankees. That also means that they had to pay a premium to acquire the two-time All-Star.

According to Jeff Passan of ESPN , that includes at least four top-30 prospects within the Yankees farm system.

Smith and Duran are currently at high Single-A ball. Both are performing extremely well at the plate. Meanwhile, Hauver finds himself at the lower Single-A level and Otto was just recently promoted to Triple-A. He’s pitching to a 7-3 record with a 3.33 ERA in 13 games (12 starts) between two levels.

Add another “scandal” to the Yankees’ season, as now, after losing two of three to the Mets in the Citi Field half of the Subway Series, we have ‘whistle-gate.’. If you don’t know by now, the story goes like this: on Saturday, the prevailing thought was that Taijuan Walker was tipping pitches, and the Mets believed the Yankees were using various whistles to articulate which pitch was coming.
MLB・4 DAYS AGO
The Spun

The New York Yankees have lost eight of their last nine games and will need to battle hard to get a Wildcard spot in the playoffs. In an effort to fix some issues, the Yankees are making a pretty significant roster move. According to MLB insider Bob Nightengale, the Yankees...
MLB・4 DAYS AGO
audacy.com

The Orioles grounds crew's apparent ejection from Wednesday night's game was not what it seemed, according to the umpire involved in the bizarre scene at Camden Yards in Baltimore. According to the Associated Press, crew chief Tim Timmons later clarified that the roughly 20 workers were not ejected from the...
MLB・1 DAY AGO
InsideThePinstripes

‘Pressing’ Joey Gallo Gives Aaron Boone Something to Think About

Joey Gallo’s recent stint as the Yankees’ No. 2 hitter has featured all the highs and lows—but mostly lows—that one would expect from baseball’s premier Three True Outcomes hitter. Gallo batted second over the last four games, starting with New York’s series opener against the Orioles on Friday. He saw...
MLB・10 DAYS AGO

Joey Gallo no longer can bat second for the Yankees. A strong case exists that he should no longer be in the lineup altogether. To date, he has been the Javier Vazquez of hitters, looking as if he belongs in New York as much as a cheetah on Fifth Avenue.
MLB・11 DAYS AGO
NJ.com

NEW YORK — As Joey Gallo has struggled to fit into pinstripes, he hasn’t hit any lower than fifth in the Yankees’ lineup. On Monday, when he struck out in all four of his at-bats in an embarrassing 8-0 loss to the Blue Jays at Yankee Stadium, Gallo was hitting second.
MLB・10 DAYS AGO
wmleader.com

Joey Gallo needed that one, even if the Yankees couldn’t pull off another late victory over the Orioles. Gallo remained in the No. 2 spot in the batting order Saturday despite a 1-for-20 skid that had dropped his overall batting average for the season to .199 — and just .134 since he was acquired from the Rangers in July.
MLB・13 DAYS AGO
MLB Game Highlights

Jahmai Jones secures a liner with a leaping snowcone grab on the edge of the grass to take a hit away from Andrew Velazquez, ending the 2nd.
13 DAYS AGO

After losing two games in a row against the Baltimore Orioles, the New York Yankees went into their Labor Day game with the Toronto Blue Jays, hoping to right the ship and get a win with Jameson Taillon on the mound. Unfortunately, that plan failed as the Yankees came away with their 3rd consecutive loss. The Yankee team of the first half again showed up listless, failing to hit, making errors, and hitting into double plays. The final score was the Jays 8, the Yankees zero.
MLB・10 DAYS AGO
chatsports.com

The New York Yankees gave up four prospects to the Texas Rangers in exchange for reliever Joely Rodriguez and the prize of their trade deadline: outfielder Joey Gallo. The hulky slugger is streaky, but is a premier power source, takes lots of walks, is sneaky athletic and boasts a terrific glove.
MLB・9 DAYS AGO
chatsports.com

Joey Gallo and the anatomy of a slump

Brett Gardner hit a go-ahead, two-run single in the ninth inning and the New York Yankees beat the host Baltimore
MLB・2 DAYS AGO

NEW YORK — Yankees manager Aaron Boone finally moved away from his usual assessment of left fielder Joey Gallo during his Saturday morning presser. Instead of more of the usual — you know, Gallo has great at-bats — the skipper admitted the lefty-swinging whiff machine “was maybe a little jumpy” going 0-for-4 with a walk in Friday night’s 4-3, 11-inning win over the Orioles.
MLB・13 DAYS AGO
numberfire.com

New York Yankees left fielder Joey Gallo is in the starting lineup for Wednesday's game against rookie right-hander Alek Manoah and the Toronto Blue Jays. Gallo is returning to left field and hitting sixth following a breather on Tuesday. Brett Gardner is moving to center field and up into the leadoff spot. Aaron Judge is in right and Giancarlo Stanton is serving as the Yankees' designated hitter. Luke Voit is idle.
MLB・9 DAYS AGO
NJ.com

NEW YORK – Monday would’ve been a good time for Joey Gallo to explain how he’s turned into the worst hitter in baseball. The lefty slugger, one of the centerpieces of the Yankees’ trade-deadline haul, is striking out 50% of the time since coming to New York and is batting .082 in his last 17 games. No math lesson needed here: those are staggering numbers.
MLB・10 DAYS AGO
newsbrig.com

The Texas Rangers seldom defeat the New York Yankees, but the early returns of the Joey Gallo trade say it will be their biggest win of the entire 2021 season. Go ahead and include the ‘22 season, too. It just happens to be the worst move in the history of...
MLB・9 DAYS AGO

Aaron Boone said on Monday that he would consider dropping slumping Joey Gallo in the lineup after Gallo went 0-for-4 with four strikeouts from the No. 2 hole against Toronto. On Tuesday, Boone dropped Gallo, all right. All the way to the bench against Blue Jays lefthander Steven Matz. It...
MLB・10 DAYS AGO
Empire Sports Media

The New York Yankees start a critical weekend series with the crosstown New York Mets tonight. The Yankees are 2-8 in their last ten games and have just been swept by the Toronto Blue Jays in a four-game embarrassing series where they only got 8 runs in the series to the Jays 25. The Mets have been playing a bit better, going 6-4 in their last ten. They are 5 games out of first place in the NL East.
MLB・7 DAYS AGO
The Big Lead

Joey Gallo Has Been a Massive Bust For the Yankees

When the New York Yankees added Joey Gallo at the trade deadline, many believed they had boosted their playoff chances considerably. By adding the long-time Texas Rangers lefty slugger, they had found a player uniquely suited to their home ballpark, and a consistent OPS producer. After five weeks, the acquisition has been an absolute bust.
MLB・10 DAYS AGO
USA TODAY Sports Media Group

The New York Yankees (78-62) and New York Mets (70-71) swing into a three-game Subway Series Friday with a 7:10 p.m. ET first pitch at Citi Field. Let’s analyze the lines around the Yankees vs. Mets odds with MLB picks and predictions. LHP Jordan Montgomery is the projected starting pitcher...
MLB・7 DAYS AGO