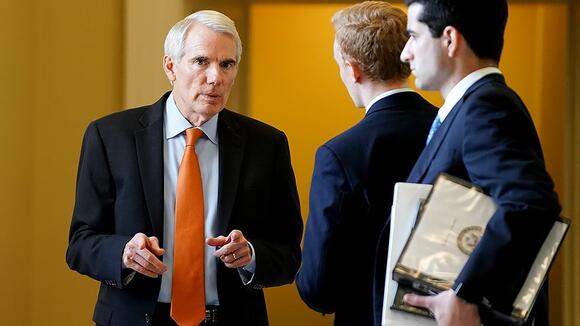 The Senate on Wednesday agreed to take up a bipartisan infrastructure package, hours after senators and the White House announced they had reached a deal after weeks of closed-door haggling.

Senators voted 67-32 to greenlight the debate, with 17 Republicans joining all 50 Democrats to launch a floor effort that could conclude with a Senate victory for a bipartisan package that has been championed by President Biden .

Big hurdles remain for the bill to reach a final vote, and negotiators are still finalizing text — the Senate is currently using a shell bill that will eventually include agreed upon language.

Still, Wednesday represented a win for Biden and the negotiators.

“We now have an agreement on the major issues. We are prepared to move forward,” Portman, who led the talks for Republicans, told reporters. “We look forward to moving ahead. And having the opportunity to have a healthy debate here.”

Sen. Kyrsten Sinema (Ariz.), who led the talks for the Democrats, added to reporters: “We’re very excited to have a deal. I want to just say everyone has been incredible in doing this work for many months.”

Wednesday’s vote comes roughly a month after Biden and the 10 senators at the core of the bipartisan negotiating group announced outside the White House that they had reached a deal on a framework for roughly $1.2 trillion over eight years.

But the group struggled to nail down the details, including how to pay for the agreement after Republicans took ramped up IRS enforcement, which was expected to be a significant source of revenue, off the table.

Some changes were made between when the framework was announced and Wednesday, when details of their agreement started to be unveiled. Though the total cost of the group’s proposal is $1.2 trillion over eight years, $579 billion of that was expected to be new spending. On Wednesday, senators revealed that number dropped to $550 billion including cutting an “infrastructure bank” that was meant to help spur private investment in large projects.

“This deal signals to the world that our democracy can function, deliver, and do big things. As we did with the transcontinental railroad and the interstate highway, we will once again transform America and propel us into the future,” Biden said in a statement.

Negotiators raced to brief their colleagues on their agreement ahead of Wednesday's vote, as they tried to lock in the 60 votes needed to get over the initial hurdle.

Republicans, who blocked debate last week, were given binders during a closed-door lunch with a roughly 30-page summary of the deal, according to one senator’s estimate. Some argued that Democrats were trying to rush the process.

“Until this bill is actually written and we have a chance to review it, including all the details, the costs, the pay-fors, and the impact it will have on our states, I will not support it. And I imagine the majority of my Republican colleagues feel the same way,” said Sen. John Cornyn (Texas).

But Republicans throughout Wednesday said they would back the initial vote, including Graham, Burr, Cramer and Tillis.

Shortly before the vote, in a boon to GOP negotiators, Capito, who had not been part of the bipartisan talks, and McConnell announced that they would vote to start debate.

Senators still face a days-long slog to finish up debate on the legislation.

Republicans, who quizzed negotiators during a closed-door lunch on the deal, are warning that they want the ability to offer amendments and are warning Democrats against trying to quickly end debate.

"My assumption is at some point, if we get on it, that McConnell and Schumer will have to negotiate a deal that enables at least a good number of amendments to be offered," he said, speaking of Senate Majority Leader Charles Schumer (D-N.Y.).

He added that some GOP senators were "going to be really dug in against it" and predicted that the Senate would have to use a "good amount of time" on the agreement before a final vote.

The bipartisan bill is one part of a two-part strategy Democrats are pursuing to pass Biden’s infrastructure package.

Schumer has vowed the Senate will vote before leaving for a weeks-long break on both the bipartisan deal and a budget resolution that will allow Democrats to pass a second, substantially larger bill without Republican support.

The two tracks are tied together: Moderates have warned that without a bipartisan deal there might not be the second larger package. And Speaker Nancy Pelosi (D-Calif.) has warned that she will not take up the Senate’s bipartisan bill until it passes the second package.

Because Schumer will need all 50 of his members to pass both the budget resolution and the subsequent spending package, all Democrats will have leverage to elbow for their priorities in the bill, which is already expected to include top agenda items such as expanding Medicare, combating climate change and immigration reform.

There are plenty of headaches awaiting Democrats in what is expected to be a months-long process. Sen. Jon Tester (D-Mont.) has said he will vote to start debate on the budget resolution, but he hasn’t said if he can support the end product. Sen. Joe Manchin (D-W.Va.) has described himself as open but hasn’t committed to anything.

And on Wednesday, Sinema warned that she was willing to vote to start the process but was going to push for changes including to the $3.5 trillion price tag for the Democrats' bill.

"I have also made clear that while I will support beginning this process," she said, "I do not support a bill that costs $3.5 trillion."

No deal unless the pipeline is restarted, the wall completed and unemployment payments to those who refuse to go back to work are stoped

Spoke with my grandchildren to see if they wanted to live in poverty when they become adults and guess what? They said no. Obviously they are smarter than any supporter of this bill!

To protect the right to vote, kill or change the filibuster

Policy, politics and progressive commentary Democrats in the U.S. Senate recently introduced a new piece of legislation, the Freedom to Vote Act.  This proposal represents the latest efforts by members of the Senate to pass comprehensive voting rights and pro-democracy legislation. Earlier legislation on these issues failed to advance in the Senate, in part because there was no clear path for […] The post To protect the right to vote, kill or change the filibuster appeared first on Nevada Current.
CONGRESS & COURTS・20 HOURS AGO
WashingtonExaminer

Democrats and Republicans are in a standoff over raising the debt ceiling and passing a $3.5 trillion infrastructure bill, widening the path toward a government shutdown and an unprecedented default on the national debt.
CONGRESS & COURTS・17 HOURS AGO
WashingtonExaminer

Democrats say they have a deal on tax increases

Congressional Democrats and the White House have reached an agreement on a “framework” to pay for a massive social welfare spending package, party leaders said Thursday.
CONGRESS & COURTS・17 HOURS AGO
Arizona Mirror

If Kyrsten Sinema wants to be a bridge-builder, she should start with her own party

There is likely no other Democrat that has taken more fire from her party this last year than Arizona Sen. Krysten Sinema. Sinema won the ire of progressives because of her insistence on preserving an archaic Senate rule that has historically been used to hamper civil rights: the filibuster. Democrats fear the filibuster will prevent […] The post If Kyrsten Sinema wants to be a bridge-builder, she should start with her own party appeared first on Arizona Mirror.
CONGRESS & COURTS・15 HOURS AGO

WASHINGTON, Sept 21 (Reuters) - Democrats in the House of Representatives passed a bill on Tuesday to fund the U.S. government through Dec. 3 and suspend the nation's borrowing limit until the end of 2022, sending it to the Senate where Republicans have vowed to block it. The House vote...
CONGRESS & COURTS・1 DAY AGO
POLITICO

After vowing to tangle with the former president if necessary to nominate electable GOP candidates, the Senate minority leader is tacitly blessing many Trump endorsements.
NFL・1 HOUR AGO
MarketWatch

As Democratic-run Washington works on getting the bipartisan infrastructure bill enacted, here are visual breakdowns for the long-awaited measure's spending categories, as well as its funding sources.
ALHAMBRA, CA・2 DAYS AGO
Los Angeles Times

Sen. Susan Collins says she would oppose Democrats' legislative response to Texas' new abortion law that bans the procedure at about six weeks of pregnancy.
TEXAS STATE・1 DAY AGO

House Republican leadership announced they would whip votes against the $1.2 trillion infrastructure bill negotiated by a bipartisan group of senators when it comes for a vote on the House floor.
CONGRESS & COURTS・1 DAY AGO
POLITICO

Many party lawmakers have waited weeks for their president, after a summer largely focused on off-Hill crises, to turn his attention to the House.
WASHINGTON, DC・1 DAY AGO
Newsweek

"The debt ceiling will be raised as it always should be, but it will be raised by the Democrats," McConnell said.
CONGRESS & COURTS・1 DAY AGO
Reuters

Several said in interviews that they’ll do whatever it takes to keep the government open — which would almost certainly involve starting negotiations with resistant Republicans.
PRESIDENTIAL ELECTION・1 DAY AGO
POLITICO

Fewer than a dozen Republicans are expected to back the Senate-passed bill. (For now.)
CONGRESS & COURTS・2 DAYS AGO
CBS News

Washington — House Speaker Nancy Pelosi told her Democratic colleagues on Monday that they should brace for "adjustments" to the $3.5 trillion social spending package to fit the Senate's constraints for the budget process lawmakers are using to fast-track the legislation through Congress. Democratic-led House committees completed work last week...
CONGRESS & COURTS・2 DAYS AGO
POLITICO

“If any member of Congress is not concerned that this could fall apart, they need treatment,” said Rep. Emanuel Cleaver (D-Mo.).
PRESIDENTIAL ELECTION・2 DAYS AGO

The Democratic-led House passed the measure by a vote of 220-211 along party lines. The bill now goes to the Senate, where it is likely to falter.
CONGRESS & COURTS・2 DAYS AGO
Washington Post

Senate Democrats are finalizing the confirmation of Rohit Chopra to lead the Consumer Financial Protection Bureau, nine months after President Biden nominated him for the post. Senators voted 49-48 along party lines Tuesday evening to advance Chopra’s nomination to the Senate floor from the Senate Banking Committee, where it snagged...
CONGRESS & COURTS・2 DAYS AGO
WashingtonExaminer

Why Does Kyrsten Sinema Oppose Drug Pricing Reform? Maybe This Is Why.

Arizona Senator Kyrsten Sinema, who is a top recipient of donations from the pharmaceutical industry, is reportedly objecting to prescription drug pricing reforms that are being pushed by President Biden and Congressional Democrats. The White House and Congressional Democrats are currently trying to shepherd two large bills through Congress: the...
PHOENIX, AZ・2 DAYS AGO