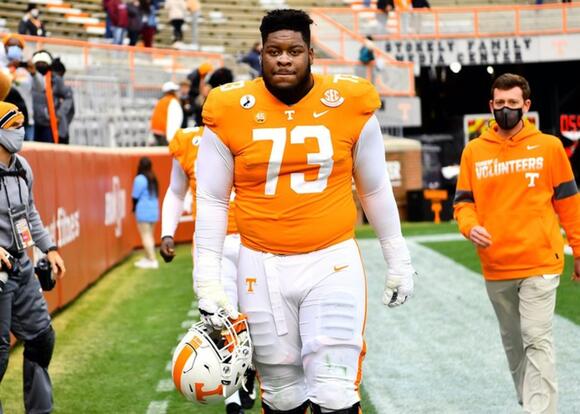 Football season is upon us, and former Tennessee standout, Trey Smith, is already making waves.

On day one, Smith got the start at right guard, according to various NFL reporters.

Also according to various reports, Andy Reid had high praise for the rookie and how he handled himself in the off-season, which is the key reason he found himself in a first-team role on day.

"He’s done a nice job,” Reid said of Smith. “He showed enough to legitimately be in that position right now. He’s got to compete. We’ll see how all of that goes when we get the pads on.”

For Tennessee fans, it comes as no surprise that Smith is already producing at a high level, and for the Chiefs, well it shows that they were right for their belief in him.

“As far as why he was still on the board, I’ll leave that to the other teams, but we had the most confidence in Rick Burkholder and Dr. Mike Monaco,” Tim Terry, Kansas City’s director of pro personnel, said. “They did a lot of research, a lot of work, did all the due diligence in searching out everything from his medical history standpoint, and we feel really comfortable and confident that we’re getting a good young man, but a good young football player that’s going to come into our building and help us to elevate the level of competition.”

NFL analyst Brian Baldinger commented on how rookie right guard Trey Smith is an absolute steal for the Kansas City Chiefs’ offensive line. While there were several severe issues that plagued the Kansas City Chiefs in Super Bowl LV — including some of Patrick Mahomes’ poor decisions — none were more amplified than the Chiefs’ need for offensive line improvement.
NFL・6 DAYS AGO
USA TODAY Sports Media Group

The debut of the Kansas City Chiefs’ new-look offensive line went swimmingly against a tough Week 1 opponent in the Cleveland Browns. The offensive line, comprised of five new starters, allowed just 12 pressures as a whole, including two sacks according to Pro Football Focus. While rookie center Creed Humphrey had the most statistically impressive performance of the bunch, fellow rookie Trey Smith had perhaps the most flashy performance on tape. He allowed only one pressure during the game, but it was his physicality and ability to keep his head on a swivel that really impressed.
NFL・5 DAYS AGO
Kansas City Star

Rookie guard Trey Smith had the fourth-highest grade from Pro Football Focus among the five Chiefs offensive linemen in Sunday’s game against the Browns. That may seem underwhelming to some, but Smith made a big impression on Brian Baldinger, the former Cowboys/Eagles/Colts lineman. Baldinger is an analyst for the NFL Network and he broke down film of Smith’s performance.
NFL・5 DAYS AGO
FanSided

The KC Chiefs were right about Le’Veon Bell

Last year, during the NFL postseason, Le’Veon Bell had a clear lane ahead of him, the exact sort of scenario for which he was signed by the K.C. Chiefs at midseason. It was the ideal setup for the recently maligned veteran, a chance on the NFL’s biggest stage in front of primetime cameras to show what he can still do before entering another chance for a free agent payday.
NFL・14 DAYS AGO

The Atlanta Falcons weren't the only ones to have a tough debut on Sunday. Atlanta was blown out 32-6 by the Philadelphia Eagles on Sunday, and former Falcons receiver Julio Jones is in hot water with Tennessee Titans head coach Mike Vrabel after getting a personal foul in the first quarter.
NFL・9 DAYS AGO
saturdaydownsouth.com

The Miami Dolphins have cut wide receiver Robert Foster, per a report from Texans beat reporter Aaron Wilson. According to Wilson, Foster has been released from the team’s injured reserve after coming to an injury settlement. Back on Aug. 24, he was waived with an injury designation but was transferred to the Dolphins’ IR after he was unclaimed by the other 31 NFL teams on the waiver wire.
NFL・23 DAYS AGO
fastphillysports.com

Colts QB Carson Wentz is on the COVID list, and we all assume that he has not been vaccinated against the virus, unlike the vast majority of NFL players, who want to avoid a forfeit. Indy Star columnist Gregg Doyel has seen enough of Wentz, whom he bashed in his...
NFL・22 DAYS AGO
The Spun

MRI Results On Baker Mayfield’s Shoulder Are Reportedly In

Cleveland Browns quarterback Baker Mayfield had to leave yesterday’s game against the Houston Texans with a shoulder injury. He came right back in and helped the Browns win the game, but how is he feeling now?. Speaking to the media on Monday, Browns head coach Kevin Stefanski provided an update...
NFL・2 DAYS AGO

The Las Vegas Raiders have reportedly made a tough decision on quarterback Marcus Mariota. According to a report from NFL Network insider Ian Rapoport, the Raiders are placing the veteran quarterback on the injured reserve list. Mariota suffered a quad injury during the Raiders’ opening weekend win over the Baltimore...
NFL・4 DAYS AGO
The Spun

Times are tough at the Florida State football program right now. The Seminoles fell to 0-3 on the season with Saturday’s loss to Wake Forest. Florida State opened the season with a close loss to Notre Dame, appearing to show some improvement. However, Mike Norvell’s team was upset by Jacksonville State in Week 2 and then lost to the Demon Deacons in Week 3.
FLORIDA STATE・2 DAYS AGO
Dolphin Nation

In a new survey, an anonymous NFL agent offered the prediction that Miami Dolphins quarterback Tua Tagovailoa will prove to be a disappointment. He went on to predict that Tagovailoa will eventually be replaced by the team. Ben Standig of The Athletic showed comments from numerous NFL agents. One agent...
NFL・29 DAYS AGO
The Spun

On Wednesday morning, the Tampa Bay Buccaneers learned some tough news about wide receiver Antonio Brown. According to multiple reports, the Buccaneers placed the talented wide receiver on the Reserve/COVID-19 list. Buccaneers insider Rick Stroud was the first one to break the news. “He’ll need to remain asymptomatic and have...
NFL・17 HOURS AGO

3 quarterbacks the Dolphins can replace Tua Tagovailoa with

With Tua Tagovailoa exiting Sunday’s game with a rib injury and perhaps facing some missed time, here are three replacement options for the Dolphins. In the first quarter of Sunday’s game against the Buffalo Bils, Miami Dolphins quarterback Tua Tagovailoa was carted off after taking a hard hit. Tom Pelissero of NFL Network reported the second-year signal caller suffered bruised ribs with an MRI coming Monday.
NFL・3 DAYS AGO
Yardbarker

JuJu Smith-Schuster continues to make headlines for the wrong reasons. The Pittsburgh Steelers wide receiver attempted the dangerous milk crate challenge earlier this week with the NFL regular season being less than two weeks away. He could've been seriously injured, and Mike Tomlin isn't happy about it. The 24-year-old was...
NFL・21 DAYS AGO
The Spun

Houston Texans quarterback Tyrod Taylor suffered an injury and may not be available this Thursday against the Carolina Panthers. But if you think Deshaun Watson is going to return to the team and save the day, you have another thing coming. NFL insider Ian Rapoport reported on Monday that Watson...
NFL・2 DAYS AGO

College football upset picks have been prosperous early with ranked teams going down, but which teams are now in danger with Oklahoma in Week 4?. Top 25 teams have been getting upset at a seemingly breakneck pace early in the 2021 college football season and that trend didn’t let up a week ago. Not only did Michigan State wax Miami, West Virginia topple Virginia Tech and Fresno State get UCLA but we also saw Ohio State, Clemson, Coastal Carolina and Oklahoma play much tighter games than expected.
OKLAHOMA STATE・13 HOURS AGO
USA TODAY Sports Media Group

The Kansas City Chiefs’ quest for a third consecutive Super Bowl appearance officially gets underway this Sunday. They’ll face a tough test in their Week 1 matchup against the Cleveland Browns. The rematch of last season’s divisional-round playoff classic will feature plenty of new faces on both teams. One key player who was missing in the Browns’ loss to Kansas City was star receiver Odell Beckham Jr., who is slated to make his return on Sunday.
NFL・12 DAYS AGO
saturdaydownsouth.com

USC’s decision to fire Clay Helton after just 2 games means some college football coaches will have distractions to deal with this season, as who will be the next Trojans’ head coach is a hot topic of conversation. SEC analyst and radio personality Paul Finebaum was recently asked on the...
COLLEGE SPORTS・18 HOURS AGO
FanSided

Buccaneers: Bruce Arians has to be done with one of his starters

The Ronald Jones era with the Buccaneers looks to be coming to a close. The Buccaneers have only played two games so far this season, and while there is still time for players to make a change, Ronald Jones has an extremely tall task ahead in getting back in the coaching staff’s good graces, specifically Bruce Arians.
NFL・18 HOURS AGO