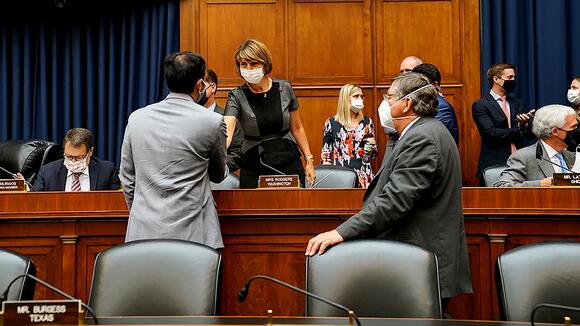 Masks are once again emerging as a flash point on Capitol Hill after Congress’s top doctor issued new guidance and cases ramp back up due to the delta variant of COVID-19.

More than half a dozen Republican lawmakers refused to comply with a reinstated requirement Wednesday that everyone wear masks on the House side of the Capitol, which followed new Centers for Disease Control and Prevention (CDC) guidance the day before urging everyone in high-risk areas to wear masks.

Several Republican firebrands, including Reps. Marjorie Taylor Greene (Ga.), Chip Roy (Texas), Lauren Boebert (Colo.), Matt Gaetz (Fla.) and Andrew Clyde (Ga.), defiantly sat together near the center of the House floor sans masks, as nearly all the other lawmakers and staff around them complied with the rules.

A House floor staffer offered Boebert a mask, but she turned it down.

Republicans further forced roll call votes on motions to adjourn to slow down House floor proceedings in protest of the new mask rules.

“Consider resentment being magnified right here on the floor of the House of Representatives,” Roy declared.

Democrats, meanwhile, were infuriated by Republicans’ refusal to comply with health measures. After happily forgoing their masks in recent weeks, they were visibly angered by having to put them back on.

McCarthy retorted that he’s questioning why the mask requirement is only being imposed on one side of the Capitol.

“Well, if she's so brilliant, can she tell me where the science in the building changes between the House and the Senate?” McCarthy asked reporters.

McCarthy and a group of other House Republicans even met with the Capitol physician Wednesday to ask about the mask decision, but the meeting concluded without a resolution.

Despite being housed in the same building, the House and Senate have developed vastly different responses to the pandemic over the past year.

All but four senators confirmed in a recent CNN survey that they are vaccinated. And senators mostly complied voluntarily with masks last year when they were recommended.

While all House and Senate Democrats have said they are vaccinated, nearly half of the House GOP is a mystery. Some Republicans have refused to share their vaccination status, while others openly acknowledge that they have no plans to get vaccinated.

Rep. Jared Huffman (D-Calif.) didn’t hide his anger when he saw Rep. Byron Donalds (R-Fla.), who he’d seen on CNN’s “Cuomo Prime Time” two days ago explaining why he wouldn’t get vaccinated, board an elevator with other lawmakers making their way to House votes.

“It's ridiculous that you're unvaccinated, unmasked and you're getting into an elevator with other people,” Huffman told Donalds, before opting for another elevator.

Donalds told The Hill afterward that he doesn’t intend to get the vaccine because he previously had COVID-19, but is not discouraging other people from getting vaccinated.

When told the CDC still recommends previously infected people get vaccinated, Donalds replied: “The CDC can recommend all they want. But that's still my choice as a human being about what I'm going to put into my body. You're talking to someone who doesn't get flu shots. Why? Because I don't want to put flu vaccines into my body.”

“In America, people need to mind their business,” Donalds added.

Senate Republicans have been actively trying to step up their efforts to combat vaccine hesitancy back home in their largely conservative states. Senate Minority Leader Mitch McConnell (R-Ky.), who was maskless on Wednesday, is going to run radio ads encouraging Kentuckians to get vaccinated.

The backtrack comes as the delta variant is leading to an increase in cases across the country. Washington, D.C., according to the CDC, has a “substantial” amount of community spread. And a Senate Homeland Security and Governmental Affairs Committee hearing was postponed after a vaccinated staffer in Sen. Gary Peters ’s (D-Mich.) Senate office tested positive.

Republicans blasted the CDC’s guidance, warning it could discourage unvaccinated people from getting the vaccine.

“The Biden administration apparently doesn’t trust the science, and they clearly don’t trust the American people to take personal responsibility for their own choices,” said Sen. Thom Tillis (R-N.C.).

“I believe the CDC’s decision yesterday was politics. It wasn’t science,” Cruz said, at the hearing.

Unlike in the House, the mask guidance on the Senate side of the Capitol is voluntary, leading to an ad-hoc decision that largely split along party lines on Wednesday.

Republicans went maskless on Wednesday, arguing that most individuals around the chamber had been vaccinated.

“Who here is not vaccinated?” a maskless Sen. Bill Cassidy (R-La.) asked a largely masked group of reporters, who were staking out an infrastructure meeting.

They also questioned if it sent the wrong message to wear a mask despite the complex’s high vaccination rate.

A GOP aide, asked about Republicans going maskless, added: “I can’t think of a more vaccinated place than the Capitol.”

Senate Democrats largely wore masks as they traveled back and forth from the Capitol to vote, with few exceptions: Sen. Jon Tester (Mont.) was spotted without a mask and Sen. Joe Manchin (W.Va.) shifted between wearing and not wearing masks.

Kaine, was spotted walking onto the floor only to remove it, and Sen. Kyrsten Sinema (D-Ariz.) was spotted maskless as she huddled with GOP senators.

Democrats acknowledged that they, like many Americans, were trying to figure out the new guidance from the CDC and the Capitol physician.

“Oh, it’s driving me crazy. I am trying my best to follow the rules,” said Senate Majority Whip Dick Durbin (D-Ill.), who took off his mask to speak with reporters. “I just asked my staff and he said, ‘you only need to wear a mask when you’re in the presence of others in the building.’ So I want to do what is right.”

Eleven Democratic senators are backing House progressives in their push to pass a massive, $3.5 trillion spending bill as part of President Biden’s Build Back Better agenda, as the US Chamber of Commerce calls the spending an “existential threat” to the US’ economic recovery. On Wednesday, the group of lawmakers...
CONGRESS & COURTS・14 HOURS AGO
Idaho8.com

House Democrats have quietly moved to restrict the GOP’s ability to use its limited power in the minority to press for investigations, an effort that has Republicans crying foul as they seek to pressure their foes over the Biden administration’s handling of Afghanistan. According to publicly available documents reviewed by...
U.S. POLITICS・16 HOURS AGO
AFP

The leader of the Democratic-controlled US House of Representatives vowed Thursday to avert a looming government shutdown as federal funds run out, despite a pledge by opposition Republicans to block the move. Republicans usually support raising the debt limit but have vowed to block any stopgap funding bill that extends the Treasury Department's borrowing authority this time around.
CONGRESS & COURTS・11 HOURS AGO
The Independent

House to vote on abortion rights as Roe is challenged

The House is set to vote on legislation aimed at guaranteeing a woman’s right to an abortion, a bill that reflects the Democratic Party's response to a restrictive new Texas law that has placed access under threat. The expected House passage of the bill Friday is likely to be mostly symbolic, as Republican opposition will doom it in the Senate But Democrats say they will do all they can to codify the Supreme Court’s 1973 Roe v. Wade decision after the Supreme Court recently allowed a Texas law that would ban most abortions in the state to take...
CONGRESS & COURTS・5 HOURS AGO

WASHINGTON, Sept 21 (Reuters) - Democrats in the House of Representatives passed a bill on Tuesday to fund the U.S. government through Dec. 3 and suspend the nation's borrowing limit until the end of 2022, sending it to the Senate where Republicans have vowed to block it. The House vote...
CONGRESS & COURTS・1 DAY AGO
USA TODAY

'Playing with fire': Democrats, Republicans on a collision course over debt limit, spending

House Democrats voted to extend federal funding to Dec. 3 and raise the debt limit, setting up a showdown with Senate Republicans over the debt
PRESIDENTIAL ELECTION・1 DAY AGO
New York Post

Republican lawmakers are slamming Democrats after House leadership moved to defund Israel’s Iron Dome on Tuesday — calling out the move as Democrats “[capitulating] to the antisemitic influence of their radical members.”. Spearheaded by the “Squad” of far-left lawmakers, which includes Reps. Alexandria Ocasio-Cortez (D-NY), Ilhan Omar (D-Minn.) and Rashida...
PRESIDENTIAL ELECTION・1 DAY AGO
Washington Post

Good morning and welcome to the first day of fall. Let the pumpkin spice whatever commence without shame. Send tips (of course, we'll protect your anonymity): earlytips@washpost.com. Thanks for waking up with us. 🚨: “Former president Donald Trump has filed a lawsuit against the New York Times, three of its...
PRESIDENTIAL ELECTION・1 DAY AGO

Several said in interviews that they’ll do whatever it takes to keep the government open — which would almost certainly involve starting negotiations with resistant Republicans.
PRESIDENTIAL ELECTION・1 DAY AGO
CNN

(CNN) President Joe Biden ramped up his outreach to a wide swath of key Democrats in the House and Senate on Wednesday, hosting multiple groups including leadership, progressives and moderates from both chambers in a series of what the White House deemed "productive and candid" meetings at a key moment for his economic agenda.
POTUS・1 DAY AGO
Washington Examiner

The top House Democrat on Appropriations has introduced a bill that would provide $1 billion for Israel’s Iron Dome missile defense system.
CONGRESS & COURTS・1 DAY AGO

Many party lawmakers have waited weeks for their president, after a summer largely focused on off-Hill crises, to turn his attention to the House.
WASHINGTON, DC・1 DAY AGO
The US Sun

FOUR Republican lawmakers have filed articles of impeachment against Joe Biden as they blasted him for his handling of the “botched” Afghanistan withdrawal and the southern border immigration crisis. The politicians think that Biden has “done so much damage for the country” as they criticized his leadership. Ohio Republican Rep....
CONGRESS & COURTS・1 DAY AGO
Business Insider

'We always do this': Sen. Jon Tester expressed frustration about the battle over raising the debt ceiling and avoiding a government shutdown

Senate Democrats are struggling to raise the debt ceiling and avoid a government shutdown. Sen. Jon Tester told Politico the fight between Democrats and the GOP was "a ridiculous exercise." "We always do this fucking dance," he told the outlet. Senate Democrats are growing increasingly frustrated as they try to...
CONGRESS & COURTS・1 DAY AGO
Reuters

Fewer than a dozen Republicans are expected to back the Senate-passed bill. (For now.)
CONGRESS & COURTS・2 DAYS AGO
Newsweek

The spending package includes funding to raise the government's debt limit, which the treasury secretary said is crucial to avoid a historic financial crisis.
LOUISIANA STATE・2 DAYS AGO