'My heart has been to help people': 600 Durham kids set to get free shoes 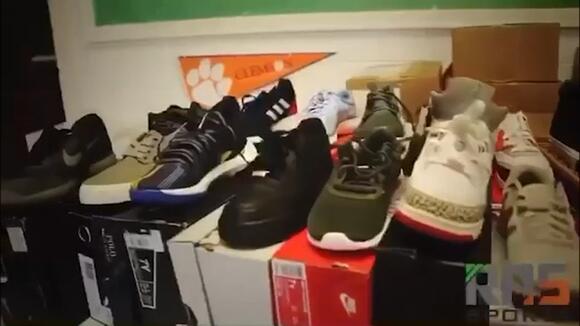 Sherard Johnson, a former teacher at Neal Middle School, is making sure underprivileged children in Durham are ready to put their best foot forward. "Each year on the first day of school, I would see behavioral issues from different students because they would have low self-esteem and confidence from the clothes they wore and the shoes they wore," Johnson said. Two years ago, the 30-year-old launched Project 300 through his nonprofit RNS Sports. He told ABC11 that his idea for the project came from a dream. The vision: Gather community donations and support to provide at least 300 children with a brand new pair of shoes "All different types, man. Like good shoes. These are not rinky-dink shoes," Johnson said. The concept has exploded since his first event in August 2019. Johnson said he waits six days before the event to announce the surprise location on social media. That's how Asia Mitchell discovered the giveaway. She was one of the lucky families to get these shoes. Mitchell is a mother of five, is disabled and lives on a fixed income. "When I told them we were going to get new shoes for school, they were overjoyed, jumping up and down was excited and waiting for the day to come," Mitchell said. "They were like, thank you!" The gratitude is a blessing for Johnson, too. "My heart has been to help people," he said. So many people showed up last time, Johnson had to turn families away. But this year he expects he can double his giveaway to 600 pairs of shoes. People have until Aug. 8 to donate before the location of the shoe giveaway is announced on social media. "It's amazing and everything to me," said Johnson. To donate or request information, send an email here or send a direct message by following @RNSSportsNC on Twitter, Instagram or Facebook at RON N Shoot (RNS) Sports Inc.

Organizers hoped by combining family fun with COVID-19 testing and free vaccinations, they would be able to dispel misinformation and answer questions.
WAKE COUNTY, NC・48 MINUTES AGO
ABC11 Eyewitness News

DURHAM, N.C. (WTVD) -- A 15-year veteran of the Durham Fire Department has died after a month-long battle with COVID-19. Fire Driver Jeremy Klemm died Saturday after a battle with the virus. Klemm was appointed to the department in 2006 was a most recently assigned to Engine 8 A-Shift. "He...
DURHAM, NC・4 HOURS AGO
ABC11 Eyewitness News

ABC11 Together is supporting our local healthcare heroes, working tirelessly amid the COVID-19 pandemic.
PUBLIC HEALTH・3 DAYS AGO

The garden's 28-acre campus is filled with 30,000 plants including rare and exotic ones.
RALEIGH, NC・1 DAY AGO
ABC11 Eyewitness News

DUNN, N.C. (WTVD) -- Distribution day at the Episcopal Farmworker Ministry is bustling. Dozens of cars are lined up through the circle driveway that leads to the main thoroughfare. Hundreds of recipients show up twice a month -- like one group of women eager to speak about their experience. "If...
DUNN, NC・2 DAYS AGO
ABC11 Eyewitness News

'I didn't do anything but cry:' Bittersweet relief for Faith Hedgepeth's family after arrest

Faith Hedgepeth's parents finally received the call they've been praying would come since 2012. "It's been a long nine years," her father said.
CHAPEL HILL, NC・2 DAYS AGO
ABC11 Eyewitness News

What are your chances of being exposed to COVID-19 at an event? These tools can help you find out

As in-person events increase across the state, the risk for events varies greatly.
DURHAM, NC・2 DAYS AGO

Wake EMS is fully-staffed, but the number of ambulances is not nearly enough to handle a crush of calls during busy times of the day.
WAKE COUNTY, NC・3 DAYS AGO
ABC11 Eyewitness News

La Fiesta del Pueblo 2021 is almost here. As many communities prepare to celebrate, let's look back at how El Pueblo's Fiesta began.
RALEIGH, NC・4 DAYS AGO

Durham organization providing $500 monthly checks to the formerly incarcerated: Here's how to apply

Step Up Durham is a nonprofit taking steps to help the formerly incarcerated get back on their feet.
DURHAM, NC・5 DAYS AGO
ABC11 Eyewitness News

Instagram fight videos from North Garner Middle School are leading to suspensions and fears of a school-to-prison pipeline from parents who tried to sound the alarm
GARNER, NC・5 DAYS AGO
ABC11 Eyewitness News

Our thoughts are with his family, friends and fellow firefighters.
HUNTERSVILLE, NC・6 DAYS AGO
ABC11 Eyewitness News

"When you lose the language, you lose a part of yourself and where you come from."
JOHNSTON COUNTY, NC・5 DAYS AGO
ABC11 Eyewitness News

'Kindness is Cool': North Hills mural encourages passerby to remember the smile behind the mask

The Durham flu shot VA clinic is walk-in, with no appointment necessary.
DURHAM, NC・6 DAYS AGO