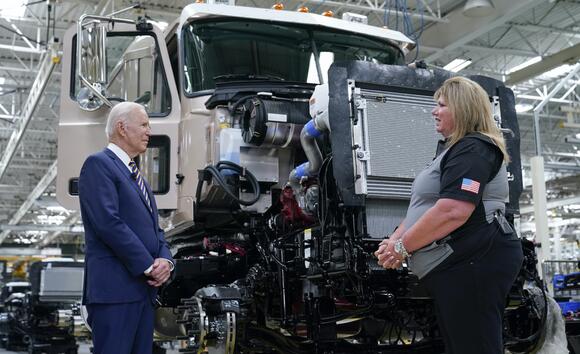 The Republican National Committee circulated a “fact check” on Twitter of whether President Joe Biden drove an 18-wheeler after a speech on manufacturing to a Mack truck facility in Pennsylvania.

“There is *zero evidence* that Biden ‘used to drive an 18 wheeler,’” tweeted the RNC’s Zach Parkinson. “The extent of Biden's trucking experience is that he **rode in** a truck once, for one night in 1973 (he made sure to return home by plane though).”

Parkinson cited a December 1973 UPI opinion piece in which Biden, then a Democratic senator, wrote that he took a 536-mile ride from his home state of Delaware to Ohio in a “47,000 pound cargo truck” to learn more about the plight of truck drivers during the energy crisis.

“I made the trip because I wanted a firsthand account from the truckers, who say they carry 50 per cent of all the goods shipped within the United States,” Biden, then serving his first Senate term, wrote. “They make a case worth listening to.”

Although he does not appear on camera, a local news channel picked up audio of Biden telling workers Wednesday, “I used to drive an 18-wheeler, man … I got to.” Biden was elected to the Senate at age 29.

“Well, I'm not going to say anything; I just came to drive a truck,” Biden said to audience laughter at the beginning of his Wednesday speech at the facility. “And I'm not sure which one I want to drive. That one? There's one back in the corner you can't see. It's the biggest damn pickup truck you ever saw in your life.”

But Biden has faced criticism for embellishing biographical details for years, including misstatements about his academic credentials that helped bring about the end to his 1988 campaign for the Democratic presidential nomination.

Biden has traveled to states such as Ohio and Pennsylvania in a bid to win working-class voters back to the Democratic column. He narrowly won the latter state last year but lost Ohio by the same margin as Hillary Clinton in 2016.

Biden has been promoting his “Buy American” and “Build It Back Better” initiatives. “I reject out of hand — I've been criticized for this for some time — but I reject out of hand this defeatist view that the forces of automation and globalization mean we can’t have good-paying union jobs in America,” he said Wednesday.

President Trump saved businesses from moving out of the country and brought manufacturing plants back . Biden reversed all that and manufacturing moved back to Mexico,. This may be the end of Mack with Biden there.

Pardon me, but I need to get on a American Airlines flight to Texas now. I mean, I've been in a plane before so I can say I'm a pilot now, right?

Well now... in his mind he probably did drive a truck... it all depends on which demented delusion he’s having at the moment so you can’t say he’s lying. Tomorrow he’ll have one about flying to the moon. Isn’t it wonderful to know he’s in the seat of the president?

John Roberts Apologizes for Laughing When GOP Rep. Says Biden Admin. Should Own Afghanistan Missteps: ‘I Do Not Expect That Will Happen’

Fox News Anchor John Roberts apologized on air to Rep. Michael Waltz (R-FL) and viewers of America Reports for a poorly timed chuckle. Waltz had expressed his desire for the Biden administration to take accountability on its handling of the military withdrawal from Afghanistan. The former Green Beret was speaking...
PRESIDENTIAL ELECTION・15 DAYS AGO
The US Sun

MILLIONS of eligible Americans will receive a second round of the Golden State Stimulus II payment worth $1,100, the California Franchise Tax Board announced this week. The payments, released Friday, September 17, will reach direct deposit recipients first. To qualify for the second round of payment, you must file your...
NEW YORK CITY, NY・5 DAYS AGO
USA TODAY

As presented in share format, Facebook users were exposed only to the claims in the headline, which suggested that United States President Joe Biden and U.S. Vice-President Kamala Harris were “served” with an “impeachment charge,” language clearly used to imply that Biden and Harris were formally or criminally “charged.”. Incidentally,...
U.S. POLITICS・20 DAYS AGO
Fox News

The Biden administration has been ensnared once again by another crisis at the southern border, this time with thousands of Haitian migrants near Del Rio, Texas. The state’s governor, Greg Abbott appeared on "The Ingraham Angle" to discuss the situation. GOV. GREG ABBOTT: "The Biden administration refuses to even pretend...
DEL RIO, TX・2 DAYS AGO
Business Insider

San Francisco London Breed defended herself for taking photos maskless in a nightclub without a mask despite the city's indoor mask mandate.
PUBLIC HEALTH・2 DAYS AGO
MSNBC

Mark Schmitz said he confronted Biden at a ceremony to repatriate the remains of his son, who was killed last week in an attack at the Kabul airport.
PRESIDENTIAL ELECTION・23 DAYS AGO
IBTimes

A stimulus check may not be in the works for all Americans, but that doesn't mean the current administration isn’t focused on funding other programs and projects to provide much-needed aid to those still struggling because of the COVID-19 Pandemic. After finding some unexpected resistance on his $3.5 trillion spending...
U.S. POLITICS・18 DAYS AGO
USA TODAY

Biden’s vaccine requirements were issued in the form of an executive order – directives that only apply to the executive branch.
U.S. POLITICS・2 DAYS AGO
Washington Examiner

August 2021 will probably be remembered as the month when Joe Biden's presidency was holed below the waterline. September is the month when it started to sink. Biden is beset by several disasters at once. All the blame is his, for they flow from his dumb, stubborn, and ideological moves immediately after he was sworn in. First, his border crisis has graduated into a catastrophe.
PRESIDENTIAL ELECTION・2 DAYS AGO

For those who pay more than lip service to democracy, and thus realize both its value and fragility, one barometric question this year has been whether the Republican Party will come to its senses regarding Donald Trump and Trumpism. Over the last half-decade, it was disquieting to watch as one...
PRESIDENTIAL ELECTION・8 DAYS AGO
Vanity Fair

In the immediate aftermath of the 2020 election, the results seemed self-evident: Joe Biden had won out, thanks in no small part to narrow blue margins in Arizona and Georgia. But for many Donald Trump supporters, historic fraud was afoot. These convictions, false though they were, resulted in a Republican-led pressure campaign against state figureheads like Georgia secretary of state Brad Raffensperger, who told The Washington Post at the time that he had heard from members of his own party who seemed to imply that he might somehow produce a different electoral result.
PRESIDENTIAL ELECTION・2 DAYS AGO
News Channel Nebraska

President Joe Biden's new vaccine requirements could apply to as many as 100 million Americans, or almost two-thirds of the American workforce, and have spawned a predictable pushback from a handful of Republican states -- making them the latest frontier in the fight between the administration and state officials over how to address the ongoing pandemic.
LABOR ISSUES・3 DAYS AGO
WashingtonExaminer

There was a chance that President Joe Biden would end a streak dating back to Bill Clinton of new presidents losing control of Congress in their first two years.
PRESIDENTIAL ELECTION・2 DAYS AGO

President Joe Biden won't get to the completion of his presidential term, according to renowned international professor Joe Siracusa, who cautioned the 78-year-old leader that the job "ages people." Professor Joseph Siracusa, a political scientist, warned that the position of president "ages people," noting that many presidents appear healthier and...
PRESIDENTIAL ELECTION・13 DAYS AGO
Deseret News

Sen. Mitt Romney called the Biden administration’s immigration policy a “monumental disaster,” and said that alone would be enough to leave the federal government “hanging on by a thread,” even if there were not so many other disasters. The Utah Republican also condemned a Democratic proposal to send monthly checks...
IMMIGRATION・1 DAY AGO