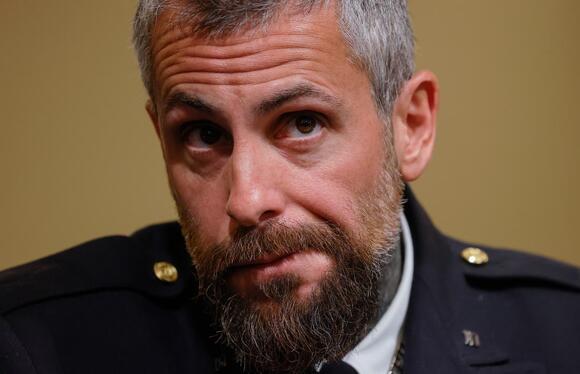 DC Metropolitan Police Officer Michael Fanone – who spoke to a House panel about his experience during the Capitol riot – fired back after Fox News hosts Tucker Carlson and Laura Ingraham mocked him and his fellow officers.

Mr Fanone and several other officers testified on Tuesday before the House select committee investigating the Capitol riot. Mr Fanone shared that he had been beaten, dragged down the Capitol stairs, shocked numerous times by a stun gun, and suffered a concussion as well as a mild heart attack. He told the lawmakers that the events had left him traumatised.

Carlson laughed after playing the clip of Mr Fanone making that claim, suggesting it would be more appropriate if he had been traumatised from the Black Lives Matter protests in 2020.

His colleague, Laura Ingraham, gave sarcastic awards to the various officers and politicians for their "performances," cynically suggesting the participants were exaggerating or being disingenuous in their testimonies.

Mr Fanone appeared on CNN on Wednesday morning to discuss the hearing, and was asked by anchor John Berman what he thought about the comments made by the Fox News hosts.

The officer recalled other moments he had sat in court during the course of his duties, and noted that he "always felt most comfortable when defence attorneys resorted to theatrical tactics because I knew that they no longer had facts to support their argument, and so they had to insult me, insult my appearance, or, you know, try to chip away at my credibility."

He said in the case of his testimony, there were "hundreds of hours of videotape" to back up his words, as well as eyewitness testimony, calling the facts indisputable. He said he "couldn't care less" if Fox News hosts or other critics wanted to try to disparage him over his neck tattoos or alleged he is a member of Antifa.

“What does concern me is the fact that you know, those entertainers have an audience, and that audience takes their words and, you know, the rhetoric that they use as more than just entertainment,” Mr Fanone said. “They think it’s real.”

He then suggested that it was people like Ingraham and Carlson who helped create a climate in which the insurrection could occur.

“That thought process has real-life consequences,” he said. “And we saw the result of that on 6 January.”

The truth is all going to come out. None of the lies or conspiracy theories will hold up. It is all coming out. It is all on VIDEO. Plus there will be witness accounts. The truth will come out.

The January 6 attack on the Capitol was unprecedented. Those officers had every reason to fear for their lives and I believe they found it traumatic.

I'm truly sorry you have to endure the absurd comments being made by fox News anchors. Clearly they know they are on their way out. Only the crazy conspiracy theorists and trumps loyal lackies remain fans. Don't stop telling the truth.

Police officer Michael Fanone has returned to work on limited duty eight months after being beaten and tased during the US Capitol riot on 6 January.He is one of four officers injured during the riot to have returned to work with the DC Metropolitan Police Department, while one remains on sick leave, according to The Washington Post.His return to a first full day of duty on Wednesday comes after recovery from both physical injuries and emotional trauma, the Post reported.A police spokesperson told the outlet that he was placed on modified duty with no firearm or arrest powers with...
PROTESTS・9 DAYS AGO
wksu.org

Hundreds of people turned up for a far-right rally at the U.S. Capitol on Saturday, amid a heightened security presence by the U.S. Capitol Police and other law enforcement agencies. The event, which was a protest of the ongoing arrests and detention of people accused of participating in the Jan....
PROTESTS・14 HOURS AGO
Newsweek

A least one Capitol Police officer reportedly later disclosed the "secure location" that lawmakers were evacuated to on January 6.
CONGRESS & COURTS・3 DAYS AGO
Newsweek

Landon Copeland, who was charged in connection with the Capitol riot, doesn't expect a big turnout on Saturday unless Trump says to "go to the Capitol again."
PROTESTS・1 DAY AGO

US Capitol Police release results of internal investigations into actions of 38 officers during the Jan. 6 riot

In 20 of the cases, no wrongdoing was found, U.S. Capitol Police said.
PROTESTS・7 DAYS AGO
TheWrap

Fox News’ Tucker Carlson was talking about Gen. Mark Milley Thursday night when a chyron appeared under him declaring, “This man is a danger to the country.”. ‘If the shoe fits…” tweeted Republican commentator Ana Navarro-Cárdenas. Screenshots of the on-air graphic quickly spread online, circulated by those who didn’t feel...
POLITICS・1 DAY AGO
WTOP

Capitol Police call for discipline against 6 officers who responded to Jan. 6 riot

The U.S. Capitol Police has recommended disciplinary action against six officers who responded to Jan. 6 Capitol riot, the department announced in a news release Saturday evening. The violations that were sustained against the six officers included three cases of conduct unbecoming and one case each of failure to comply...
ADVOCACY・7 DAYS AGO
Reuters

U.S. Capitol Police: no wrongdoing in most probes in Jan. 6 riot

WASHINGTON (Reuters) - The U.S. Capitol Police has not found evidence of wrongdoing in most internal probes related to the Jan. 6 insurrection and recommended disciplinary action in six cases, the department said on Saturday. The police bureau launched 38 internal investigations and was able to identify the officers involved...
PROTESTS・7 DAYS AGO

A U.S. Capitol Police investigation into the conduct of officers during the Jan. 6 riot did not find any criminal behavior, but six officers were recommended for discipline for breaking rules, officials said Saturday. The agency reviewed 38 cases, in which the U.S. Attorney's Office had already found no evidence...
PRESIDENTIAL ELECTION・7 DAYS AGO
The Independent

Republican senator Lindsey Graham has said law enforcement should take a “firm line” during a right-wing demonstration in Washington DC which is scheduled for Saturday.Hundreds of people are expected to descend on the city for the rally, and security barricades have already been installed around the US Capitol to avoid the destruction that was witnessed on 6 January.Mr Graham, who despite being an on-and-off ally of Donald Trump, criticised the rioters for assaulting Congress in January. He told The New York Times that law enforcement needed to be firm with protesters at the upcoming demo, which has been...
ADVOCACY・2 DAYS AGO
USA TODAY

6 US Capitol police officers recommended for discipline in Jan. 6 riot ahead of 'Justice for J6' rally

U.S. Capitol Police have recommended 6 officers for disciplinary action stemming from actions at the riot Jan. 6 at the Capitol. None face charges.
PROTESTS・6 DAYS AGO
NBC Washington

Law enforcement agencies in Washington, D.C., plan to have a large presence at Saturday's rally at the U.S. Capitol as threats of armed protesters spread online. The Justice for J6 rally is planned for Saturday outside the Capitol. That rally is in support of the rioters who violently stormed the building on Jan. 6.
WASHINGTON, DC・4 DAYS AGO

Former President Donald Trump on Thursday condemned the criminal prosecution of hundreds of his supporters who were part of the mob that invaded the Capitol complex on Jan. 6. Trump's claim that those people are being "persecuted" came as police in Washington prepared for Saturday's planned "Justice for J6" rally outside the Capitol, which is being held to support the defendants.
POTUS・2 DAYS AGO
pbs.org

WASHINGTON (AP) — Allies of Donald Trump are mounting a Saturday rally at the U.S. Capitol, aimed at supporting what they call the “political prisoners” of the Jan. 6 insurrection — about 60 people held behind bars of the more than 600 charged in the deadly riot. Watch this news...
PROTESTS・1 DAY AGO
Shropshire Star

As he was asked in a phone interview whether former president Donald Trump would run in 2024, Roger Stone paused to answer the front door. Stone, a longtime confidant to the former president, apologized to the St. Louis radio show, but he had a good reason: He was being served with papers related to the federal lawsuit filed by seven U.S. Capitol Police officers against him, Trump, far-right “violent extremist groups” and others accused of being responsible for the Jan. 6 riot at the U.S. Capitol.
POTUS・2 DAYS AGO
mediaite.com

For the second week in a row, Fox News’ Tucker Carlson took shots at Senator Lindsey Graham before the senator appeared with Sean Hannity the same night. Before the last segment of his show, Carlson went out of his way to bring up the South Carolina Republican as he talked about Afghanistan:
CONGRESS & COURTS・17 DAYS AGO
WUSA

No, there are not 'hundreds' of Capitol riot defendants in DC jail

WASHINGTON — On Saturday, September 18 a rally has been planned on Capitol grounds to protest the ongoing criminal cases against people charged in connection to the Capitol Riot. The organizers of the “Justice for J6 Rally" have repeatedly referenced hundreds of Americans being detained in jail, going so far as to call those arrested for crimes Jan. 6 "political prisoners."
PROTESTS・2 DAYS AGO
Axios

Senate offices closing on Friday ahead of pro-Capitol riot rally

Multiple Senate offices are planning to close Friday amid security concerns around Saturday's rally in support of jailed Jan. 6 rioters, multiple senate aides who were told to work remotely on Friday tell Axios. Why it matters: The Capitol this weekend will face its first large-scale security test since the...
CONGRESS & COURTS・2 DAYS AGO