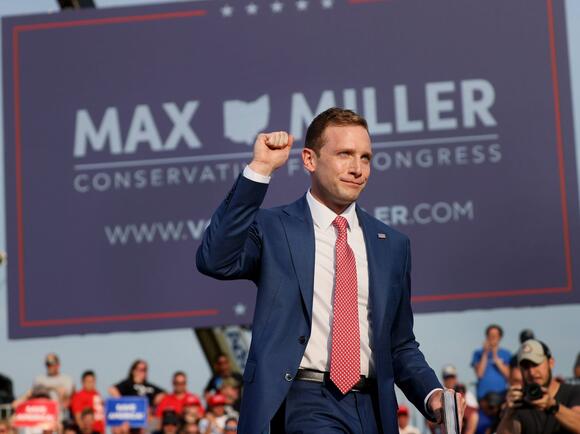 Max Miller, an Ohio congressional candidate who has been endorsed by former President Donald Trump, is denying allegations that he assaulted former White House press secretary Stephanie Grisham, according to a Politico Magazine profile that was published on Wednesday.

Politico Magazine's Michael Kruse detailed allegations of abuse in a lengthy article shedding light on how the turbulent past of Miller , who worked both as an advance staffer for Trump's 2016 campaign and as associated director of the Office of Personnel in the White House.

Miller is now mounting a primary challenge to GOP Rep. Anthony Gonzalez in Ohio's 16th congressional district. Gonzalez is a target of Trumpworld for voting to impeach the former president for inciting the January 6 insurrection.

In addition to closely examining Miller's troubled past in Ohio, Politico Magazine reported on his volatile 1 1/2-year relationship with Grisham, who worked first as former first lady Melania Trump's chief of staff and top spokeswoman before serving as White House press secretary.

Citing three sources familiar with the matter, Politico Magazine reported on the pair's fights, including when Grisham accused Miller of infidelity. Miller once threw a dog toy at Grisham and would try to grab her when she tried to leave in the elevator of his apartment building, the article said.

Three sources told Politico that in April 2020 Miller slapped and pushed Grisham. She fled from the scene of their fight, running away from Miller into chilly evening temperatures with just her purse and no jacket, per the sources who spoke with Politico.

One person, who Politico described as a non-White House source close to Grisham, confirmed that the episode "happened," describing it as "violent" and "very hard for her."

Zuckerman dened the allegations to Politico. "None of these alleged 'three people' could possibly have any first-hand knowledge of this false incident because it never happened," he said.

Miller's attorney shared emails with Politico between Grisham and Miller that show Grisham accusing Miller of cheating on her and Miller denying the charges, but no mention of an assault, which Zuckerman described as proving Miller's innocence "by way of omission."

It never ceases to amaze me that the candidates Trump endorses are lowlifes like him. The only decent person he has endorsed is the lady on north Texas.

I love how the attorney claims that it never happened but poo poos witnesses because "they weren't there". Total hyprocacy

Just another trump Brownshirt. They’re all criminals. Trump should have just cut out the middle man and recruited straight from America’s prisons.

Opinion | Why Sane Republicans Are Purging Themselves

It looks like they’re giving up, but for politicians like Anthony Gonzalez, a party run by Trump is not worth fighting for.
NFL・1 DAY AGO
MSNBC

Two words were so closely associated with Republican Rep. Anthony Gonzales that I started to think they were part of his name: "rising star." The Ohio congressman was a young former football star with an MBA from Stanford whose political career appeared to have limitless potential. That is, until January....
POTUS・6 DAYS AGO
TheDailyBeast

A spokesperson for Rep. Jim Jordan (R-OH) has denied a reporter’s claim that the congressman was caught blabbing about an imminent 2024 announcement from former President Donald Trump. Lauren Windsor, a reporter for political web-show The Undercurrent, claimed late Thursday that Jordan told her Trump will announce his run “any day now.” Early Friday, she posted a video of Jordan saying: “President Trump, he’s gonna run again... I know so, I talked to him yesterday, he’s about ready to announce after all of this craziness in Afghanistan.” The video didn’t contain Jordan saying Trump would announce “any day now,” and it’s not clear if there’s more footage yet to be published. When asked about the earlier reported quote, Jordan’s spokesperson told Politico: “Not true. Mr. Jordan did not say this.” Last week, Windsor caught Sen. Ron Johnson (R-WI) on camera blaming Trump for his defeat in 2020.
PRESIDENTIAL ELECTION・20 DAYS AGO
pinalcentral.com

COLUMBUS (WCMH) –The newest Republican to enter the race to represent Ohio in the U.S. Senate is the only GOP candidate who is not trying to win the endorsement of former President Donald Trump. Ohio Senator Matt Dolan said the only endorsement he needs is that of Ohio voters. Hours...
COLUMBUS, OH・1 DAY AGO
Washington Post

The Jan. 6 assault on the Capitol and the falsehoods that inspired it continue to shape the Republican Party, with former president Donald Trump ramping up his defense of the rioters who participated in the violence while marshaling opposition to GOP lawmakers who have denounced the attack as an insurrection and a threat to American democracy.
POTUS・5 DAYS AGO
Fox News

It took only hours for two candidates to drop out of Wyoming’s House race after Donald Trump endorsed Harriet Hageman in her bid to unseat Rep. Liz Cheney. Both Bryan Miller and Darin Smith have ended their candidacies, and said they will commit to backing Hageman. Miller, chairman of the...
U.S. POLITICS・13 DAYS AGO
HuffingtonPost

Conspiracy theory-endorsing Rep. Marjorie Taylor Greene (R-Ga.) turned to the cartoon “Scooby-Doo” to try to trash the Green New Deal on the House floor on Wednesday, and critics couldn’t believe the stunt wasn’t a parody. “This is a simple meme that you would find on the internet but this meme...
CONGRESS & COURTS・8 HOURS AGO
WashingtonExaminer

The White House is leaning toward releasing information to Congress about what Donald Trump and his aides were doing during the Jan. 6 attack on the U.S. Capitol despite the former president’s objections — a decision that could have significant political and legal ramifications. Trump has said he will cite...
POTUS・1 HOUR AGO

The One Guest On The View That Whoopi Goldberg Couldn't Stand

Over its long history, "The View" has had plenty of controversial moments. There was the infamous split-screen smackdown over the Iraq war between Rosie O'Donnell and Elisabeth Hasselbeck, which led to O'Donnell quitting the show. Bill O'Reilly made Whoopi Goldberg and Joy Behar walk off the stage when he proclaimed that "Muslims killed us on 9/11." And in 2011, former President Donald Trump sat on the couch and peddled the idea that former President Barack Obama was not born in America, leading Goldberg to say, "Donald, I love you ... that's the biggest pile of dog mess I've heard in ages."
TV & VIDEOS・20 HOURS AGO
Insider

Flynn made the baseless claim on a conservative podcast, saying: "These people are seriously thinking about how to impose their will on us in our society, and it has to stop,"
PUBLIC HEALTH・9 HOURS AGO
HuffingtonPost

Hillary Clinton’s 2016 warning about the “deplorables” emerging in the Republican Party when Donald Trump ran against her for president wasn’t just correct; she underestimated their impact, a Salon commentator wrote in a scathing essay posted Wednesday. “In many ways, Clinton was too kind,” Chauncey DeVega wrote. “If anything, she...
PRESIDENTIAL ELECTION・22 HOURS AGO

Bannon confirmed what journalists Robert Costa and Bob Woodward recently reported, that he had a "war-room-type meeting" with Trump allies in D.C. on January 5.
POTUS・21 HOURS AGO
WashingtonExaminer

The Biden administration has come out against an amendment to the defense budget that would prevent the Pentagon from dishonorably discharging service members who refuse to receive the COVID-19 vaccine.
U.S. POLITICS・21 HOURS AGO
POLITICO

The House panel probing the Capitol attack is readying a wave of subpoenas and already getting results from its document requests.
DALLAS, TX・7 HOURS AGO
MSNBC

Trump's 'A Crazy Man': Inside The Final MAGA Days As The Big Lie Spreads

New details from a Bob Woodward and Robert Costa interview reveal the truth about Trump’s final days in office, where Gen. Mark Milley was described as trying to contain a president in “serious mental decline”. Even as truth about Trump is revealed, his election lies continue to spread with the help of the GOP, fueling threats toward lawmakers and skepticism about upcoming election. “This is a crazy man,” says Pulitzer prize-winning Washington Post columnist Eugene Robinson. Former Congresswoman Donna Edwards and democratic pollster Fernand Amandi also join.Sept. 20, 2021.
POTUS・2 DAYS AGO