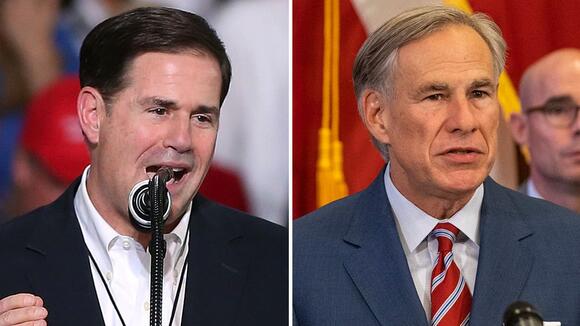 Republican governors are rejecting new mask recommendations the Centers for Disease Control and Prevention (CDC) issued Tuesday, casting the health guidance as a step back amid a push to vaccinate millions of Americans that is already struggling in their states.

In statements and public comments, governors said their states would not return to the mask orders issued in 2020.

“The CDC’s new guidance suggesting that vaccinated people wear masks indoors flies in the face of the public health goals that should guide the agency’s decision making,” Nebraska Gov. Pete Ricketts (R) said in a statement. “The State of Nebraska will not be adopting their mask guidance.”

“Public health officials in Arizona and across the country have made it clear that the best protection against COVID-19 is the vaccine. Today’s announcement by the CDC will unfortunately only diminish confidence in the vaccine and create more challenges for public health officials — people who have worked tirelessly to increase vaccination rates,” Arizona Gov. Doug Ducey (R) said in a statement.

Newly revised guidance from the Atlanta-based agency recommends that some fully vaccinated people wear masks indoors if they live in areas where the virus is spreading rapidly.

In comments Wednesday, CDC Director Rochelle Walensky acknowledged that Americans are “tired and frustrated” by the pandemic. But the surging delta variant, which is far more transmissible than earlier strains and now makes up the vast majority of new cases diagnosed in the United States, has changed the agency’s best understanding of the science of the virus.

About 46 percent of counties in the U.S. — including much of the South, the Mountain West and the Pacific Coast — are classified as areas with high levels of community transmission. Every county in Florida, Louisiana and Arkansas falls into the category of highest concern, along with all but a few counties in states like Alabama, Georgia, Mississippi and Missouri.

Most of Nevada, Utah and Wyoming are areas of high concern. So are parts of California, much of Indiana and Kentucky, and eastern swaths of Kansas, Oklahoma and Texas.

Governors of some of the states at the epicenter of the delta wave said they had no intention of bringing back mask mandates.

“Gov. Abbott has been clear that the time for government mandating of masks is over — now is the time for personal responsibility,” Texas Gov. Greg Abbott’s (R) office said in a statement Tuesday. “Every Texan has the right to choose whether they will wear a mask, or have their children wear masks.”

Abbott was among the majority of governors who issued a mask mandate last year. Texans were ordered to wear masks indoors for 250 days, until March. Abbott subsequently issued an executive order barring state or local government agencies from issuing their own orders.

“I’m concerned that this guidance will be used as a vehicle to mandate masks in states and schools across the country, something I do not support,” Reynolds said.

President Biden said Tuesday he would follow CDC’s guidance when traveling to high-risk areas. He said the guidance was meant to “avoid the kind of lockdowns, shutdowns, school closures and disruptions we faced in 2020.”

“Unlike 2020, we have both the scientific knowledge and the tools to prevent the spread of this disease. We are not going back to that,” Biden said.

“The CDC shifts their position AGAIN,” Noem wrote on Twitter. “South Dakota’s cases remain low. If you’re worried about the virus, you’re free to get vaccinated, wear a mask, or stay home. But we won’t be mandating anything. And the CDC’s inconsistency doesn’t help the American people.”

The rise of the delta variant, first identified in India, has spurred Republicans to urge their supporters to accept vaccines that are still demonstrably effective against the new strain.

Some Republicans, such as Senate Minority Leader Mitch McConnell (Ky.) who survived polio as a child, have been vocal proponents of vaccination from the earliest days. McConnell said Tuesday he would spend his own campaign cash to air radio advertisements on more than 100 stations across Kentucky urging his constituents to take the shot.

Others have only come around more recently. House Minority Whip Steve Scalise (R-La.) said last week he had been spurred to take the vaccine by the dangers of the delta variant.

Alabama Gov. Kay Ivey (R), who expressed frustration with those who refused to get their shots, wrote an op-ed in The Washington Post — later reprinted in her home state newspapers — urging constituents to embrace a vaccine developed under former President Trump .

But even in Ivey’s state, where only 34 percent of adults are fully vaccinated — the lowest rate in the country — the governor said she would not take additional steps to encourage vaccination.

“There are those who believe that government should mandate the vaccine or that we should bribe people to take it. That’s not going to happen in my state, no matter how many times the media ask me,” Ivey wrote.

All of these governors need to be sued by the families and individuals who was infected by COVID19. Those governors have access to the best healthcare that the general public doesn’t have. People who have had hospital stays have 1 million dollars hospital tabs.

It appears some people don't care about themselves,their families, or anyone else. Mask help control the spread of the virus.

I hope both their health systems completely collapse. It would karma for them and the dumbass citizens refusing the vaccine. Smh Refuse them a hospital bed they don’t deserve it.

And the House passed a bill meant to avert a government shutdown and avoid a debt default.
CONGRESS & COURTS・23 HOURS AGO
25 News KXXV and KRHD

SACRAMENTO, Calif., Sept 15 (Reuters) - California Governor Gavin Newsom on Tuesday handily beat back a Republican campaign to oust him from office, sending a decisive message that voters in the deeply Democratic state supported his policies for tackling COVID-19, immigration and crime. Newsom, who won his first term in...
POLITICS・7 DAYS AGO

WASHINGTON - New polling shows that the majority of Americans do not approve of President Joe Biden’s new vaccine mandate. Biden announced the mandate last week, which includes requirements that any business with more than 100 employees ensure they are vaccinated or be tested weekly. Biden’s announcement included a range of other federal rules that are estimated to affect 100 million Americans.
U.S. POLITICS・8 DAYS AGO
Must Read Alaska

Will Dunleavy join lawsuit with other Republican governors to defend against Biden’s Covid shot mandates?

Gov. Mike Dunleavy joined a phone call with 20 Republican governors on Friday to discuss a lawsuit to be filed in federal court against the Biden Administration over its extreme federal mandate requiring Covid shots for the entire federal workforce and any business with more than 100 employees. Congress and the U.S. Postal.
PUBLIC HEALTH・10 DAYS AGO
spectrumlocalnews.com

The Latest: Biden calls out Republican governors on vaccines

WASHINGTON — President Joe Biden is calling some Republican governors “cavalier” for resisting new federal vaccine requirements he hopes will contain the surging delta variant. Biden visited Brookland Middle School on Friday, just a short drive from the White House. He was making the case for new federal rules that...
PHARMACEUTICALS・12 DAYS AGO
The Associated Press

BUTLER, Wis. (AP) — Former Wisconsin Lt. Gov. Rebecca Kleefisch launched her campaign for governor on Thursday by likening herself to former President Donald Trump and deriding the Democratic incumbent as a weak failure. The Republican told a couple hundred supporters at an envelope factory where her father used to...
WISCONSIN STATE・13 DAYS AGO

COLUMBUS, Ohio -- A state representative leading a stalling effort to ban Ohio employers from requiring vaccines has been removed from her committee assignment, which she says is punishment for trying to bypass leadership and force a vote on her bill. State Rep. Jennifer Gross, a Butler County Republican, told...
OHIO STATE・1 DAY AGO
Columbus Dispatch

Mandates on COVID-19 testing, vaccines and masks? This new Ohio bill targets them all

Fighting against COVID-19 mandates — be it vaccines, vaccine passports or masks — is increasingly a priority for many conservative Ohio lawmakers. In what is at least the seventh active bill prohibiting such mandates, state Reps. Scott Wiggam, R-Wooster, and Thomas Hall, R-Madison Township, introduced on Monday House Bill 425, arguably the broadest approach so far, targeting almost every organization and type of COVID-19 mandate.
OHIO STATE・1 DAY AGO
24/7 Wall St.

It has now been 40 weeks since the first shipments of the COVID-19 vaccine were sent out to states, kicking off the largest vaccination campaign in human history. As of September 19, the U.S. has sent 466,561,785 doses of the vaccine across the country — equivalent to 142.1% of the U.S. population. While the initial […]
WASHINGTON STATE・1 DAY AGO
CNET

COVID vaccine mandates are here. Here's everyone who needs proof of vaccination

The White House has a plan to mandate vaccinations for two-thirds of US workers, but it's getting a bit of blowback. For the most up-to-date news and information about the coronavirus pandemic, visit the WHO and CDC websites. Since President Joe Biden announced COVID-19 vaccine mandates on Sept. 9, there...
PHARMACEUTICALS・12 HOURS AGO

DETROIT, Mich. (WLUC) - Former Detroit Police Chief James Craig was supposed to announce his candidacy for governor at a park in Detroit Tuesday morning. That was until protestors surrounded the podium. Moments later, the Republican emerged to say he’s officially running for governor only to be drowned out by...
DETROIT, MI・8 DAYS AGO
hiawathaworldonline.com

A Republican could become governor of super blue California

How many candidates are running in the California gubernatorial recall election? And could a Republican really win such a Democrat-leaning state? CNN's Chris Cillizza explains what's going on.
CALIFORNIA STATE・9 DAYS AGO
speaker.gov

Insurrectionists stormed the United States Capitol in an effort to overturn an election and murder elected officials less than eight months ago. They were spurred on by the Big Lie and dangerous rhetoric from Republican leaders. Shamefully, House Republicans have not learned their lesson. This week, in response to overwhelmingly...
CONGRESS & COURTS・12 DAYS AGO
Commonwealth Journal

The Kentucky General Assembly has passed a bill that would eliminate the public school mask mandate that was put in place by the Kentucky Board of Education. The Senate passed SB1, their version of the bill, on a 28-8 vote. The House also passed HB1, which mirrors the Senate bill, on a 71-24 vote.
PUBLIC HEALTH・13 DAYS AGO

A lawsuit has been filed against New York State for the mandate of masks in schools. Supporting the lawsuit is Republican Senator George Borrello, a private religious school, and a parent advocacy group. This is just one more lawsuit surrounding mandates. Recently, a group of healthcare workers filed a lawsuit...
EDUCATION・3 DAYS AGO
suncommunitynews.com

WASHINGTON, D.C. | U.S. Rep. Elise Stefanik has joined more than two dozen fellow lawmakers in calling for transparency in the Centers for Disease Control and Prevention guidance recommending masks for all students in K-12 schools. “The elementary and secondary years are too valuable a time in a child’s development...
EDUCATION・8 DAYS AGO
coloradosun.com

This story was originally published by Chalkbeat Colorado. More at chalkbeat.org. Amid a sharp increase in school outbreaks and COVID cases among children, Colorado’s state health department issued new guidance Friday that more forcefully recommends that schools require masks, even as Gov. Jared Polis made clear that he has no plans to make sure that they do.
COLORADO STATE・9 DAYS AGO
WashingtonExaminer

The largest teachers union in the United States influenced federal health officials to include rules for universal masking in school buildings, according to newly published emails obtained by a government watchdog group.
EDUCATION・14 DAYS AGO