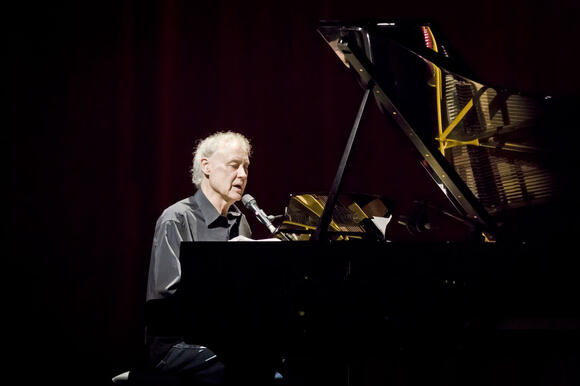 The former Grateful Dead pianist’s rendition is both a faithful rendering and disjointed take on the surprise 1994 hit single, with Hornsby’s piano replicating J. Mascis’ riff before spiraling off melodically.

The compilation’s artwork is inspired by Dungeons & Dragons , the popular role-playing game which gave the label its name; founder Darius Van Arman and partner Chris Swanson got “Jagjaguwar” from a D&D name generator.

The 500 Greatest Songs of All Time

In 2004, Rolling Stone published its list of the 500 Greatest Songs of All Time. It’s one of the most widely read stories in our history, viewed hundreds of millions of times on this site. But a lot has changed since 2004; back then the iPod was relatively new, and Billie Eilish was three years old. So we’ve decided to give the list a total reboot. To create the new version of the RS 500 we convened a poll of more than 250 artists, musicians, and producers — from Angelique Kidjo to Zedd, Sam Smith to Megan Thee Stallion, M. Ward to Bill Ward — as well as figures from the music industry and leading critics and journalists. They each sent in a ranked list of their top 50 songs, and we tabulated the results.
MUSIC・3 DAYS AGO
Rolling Stone

A Houston summit meeting: the skyrocketing MC Megan Thee Stallion’s breakout single, remixed with the city’s — and R&B’s — reigning queen confidently spitting a few quick bars to remind us that, if she really wanted to, she could rap circles around your favorite MC as a full-time job. When Beyoncé confirmed her guest spot was on, Megan said, “I cried — like, I had to call my grandma.” But just her grandma: The collaboration — which hit Number One on its own — was kept under wraps until the last second: “I didn’t even tell my best friend.”
MUSIC・3 DAYS AGO
Rolling Stone

Inspired, according to his 2015 memoir, by a “beautiful checkout girl” whose dreams he imagined “would soon be squandered to a ruffian,” this deceptively tender ballad on Costello’s debut album helped enshrine him as post-punk’s most gifted melodist. In 1977, Costello credited his hard-bitten lyrical style to the fact that “there’s nothing glamorous or romantic about the world at the moment.… Nobody’s got the time or the money.” Nevertheless, Costello’s attempt at “a beautiful sound” on “Alison” was inspired in part by Jimi Hendrix’s “The Wind Cries Mary”: They share a similarly crackling guitar tone.
MUSIC・3 DAYS AGO
Rolling Stone

The idea for “I Like It” came from Atlantic CEO (and former DJ) Craig Kallman, who wanted a cut for Cardi’s debut, Invasion of Privacy, that emphasized her Puerto Rican roots. While he and producer J. White developed the backing track, Atlantic A&R rep Edgar Machuca recruited Latin urbano heroes J Balvin and Bad Bunny. The seven-month development process drew others, too, but it was Cardi B who turned “I Like It” into a one-of-a-kind spectacle. “I remember when I was six months pregnant doing the music video for the song,” she told Billboard. “But the outcome of it all was beautiful.”
CELEBRITIES・3 DAYS AGO

DJ and producer Joel Corry has released a new remix of Nina Simone’s rendition of “Feeling Good,” set to appear on the upcoming Simone collection, Feeling Good: Her Greatest Hits and Remixes, out October 29th via Verve Records. Corry puts a decisively contemporary spin on the track, draping all the...
MUSIC・3 DAYS AGO
wfpk.org

Listen hear! spotlights a song we like and think you will too. Verve Records just announced a new collection of music from pianist, singer-songwriter, and activist Nina Simone. Feeling Good: Her Greatest Hits and Remixes, set for release on October 29, compiles some of the most iconic songs recorded throughout her career including seven new remixes by some of today’s hottest DJ’s. The first single from the album is a remix by English DJ/producer Joel Corry of the timeless classic “Feeling Good.” It has us feeling REALLY good!
MUSIC・2 DAYS AGO
thereader.com

One of the most influential alternative rock bands during the 1990s due to their lo-fi recordings and implementation of noise rock, Dinosaur Jr. is returning to The Waiting Room Lounge on a future date TBD. Originally slated for a mid-2020 release, the trio’s newest album, Sweep It Into Space, released...
MUSIC・1 DAY AGO
The Independent

Pearl Jam bassist Jeff Ament came out of the band’s pandemic sabbatical — which he spent recording a solo album, painting and he dabbled in Olympics analysis with his friend Kenny Mayne — to catch some live music this summer. He saw Guns N’ Roses and Brandi Carlile rocking the stage — and the densely packed masses of fans that came out for a good time.“Both of those experiences were pretty amazing,” he said, “but also a little frightening.”Pearl Jam will play Saturday in front of a crowd for the first time since a Sept. 4, 2018, date at Fenway...
MUSIC・1 DAY AGO

Pearl Jam are returning from a three-year live hiatus on Saturday night when they headline the Sea.Hear.Now Festival on the Asbury Park, New Jersey, beachfront. They had plans to tour the world last year in support of Gigaton, but they were forced to postpone everything due to the pandemic. That means they haven’t faced a live audience since their September 4th, 2018, show at Fenway Park. It’s the longest break of their 30-year career. The two-day festival will also feature sets by Patti Smith, the Smashing Pumpkins, Billy Idol, Lord Huron, Ani DiFranco, and many others. Patti Scialfa was on the...
MUSIC・2 DAYS AGO
Rolling Stone

Was Bob Dylan Good in the Eighties? A New Edition of ‘The Bootleg Series’ Makes Us Think the Answer is ‘Yes’

The Eighties are widely regarded as the low point of Bob Dylan’s entire career, a time when he struggled to find relevance in the MTV era and released a series of tacky, rudderless albums that were savaged by fans and critics. Even Dylan himself refuses to defend his output from the time. “[I was] pretty whitewashed and wasted out professionally,” he recalled in his 2004 memoir Chronicles: Volume One. “I’m in the bottomless pit of cultural oblivion. You name it. I can’t shake it.”  But the newest chapter of the bootleg series, Springtime In New York (1980-1985), forces us to reevaluate...
CELEBRITIES・2 DAYS AGO
Rolling Stone

Chris Jagger gets an assist from his older brother Mick in the new video for his song, “Anyone Seen My Heart.” “Anyone Seen My Heart” is a snappy tune that incorporates elements of soul, pop, and ska. The new video, directed by Oska Zak, is simple but charming, opening with a shot of the Jagger brothers working on a song together while Chris goes on to belt lead and Mick provides backup. “Anyone Seen My Heart” appears on Jagger’s recent album, Mixing Up the Medicine, which arrived on September 10th. The song, like several others on the LP, was inspired in part by the obscure 19th-century poet Thomas Beddoes: “I was reading this book by Ezra Pound, and he mentioned Beddoes,” Jagger said in a statement. “I found this book of his called Death’s Jest Book, in which he wrote these kind of weird plays. I read some of his verse and took them and put them to music.” Along with releasing Mixing Up the Medicine earlier this month, Jagger also published his new memoir, Talking to Myself.
MUSIC・1 DAY AGO
Stereogum

We generally don’t think of Brian Wilson as the kind of artist who would record a stripped-down solo-piano album. At his peak, the former Beach Boys sonic mastermind was famous for complex orchestrations and layered vocal harmonies so ambitious that the rest of Wilson’s band rebelled against him. But later this fall, Wilson will release At My Piano, a new album of Beach Boys classics that consists entirely of Wilson playing piano.
MUSIC・1 DAY AGO

Brandi Carlile's 'In These Silent Days' is nearly here, and the country singer is sharing snippets from each track in the lead up to her new album's release.
MUSIC・10 HOURS AGO
nickiswift.com

Inside Mick Jagger's Reaction To The Death Of Charlie Watts

Rolling Stones drummer Charlie Watts died at age 80 on August 24, per Variety. A number of other musicians paid tribute to Watts after his death, and now, Mick Jagger has joined them. The Rolling Stones frontman was one of the closest people to Watts, and his tribute has Rolling Stones fans in tears. Jagger first tweeted a photo of a smiling Watts on the day of his death, but he's since shared a longer tribute to his late bandmate.
CELEBRITIES・19 DAYS AGO
IBTimes

Mick Jagger Net Worth Will Stun You; Rolling Stones Singer Among Richest Rockers

Mick Jagger is the lead vocalist of the band the Rolling Stones, and he is also one of its founding members. Due to his success in the music industry, the artist has gained a lucrative net worth to become one of the richest rockers in history. Throughout their six-decade career,...
MUSIC・24 DAYS AGO
Rolling Stone

The Last Word: Ron Wood on Beating Addiction and How to Keep Mick Jagger Happy

When asked how he’s kept busy during Covid lockdown, Ron Wood doesn’t sound too bothered by the unexpected downtime. “I was out in the English countryside with my studio about a mile away,” says the Rolling Stones guitarist and painter. “I’d walk through the forest. And I did an incredible amount of artwork during that time. I really used this time to its best.” Although he also spent some of the time overcoming a battle with small-cell cancer, the 74-year-old Wood also made space to paint and play guitar on recordings by the Rolling Stones, for their upcoming Tattoo You reissue,...
CELEBRITIES・2 DAYS AGO
Amomama

As a young woman, having your father disapprove of your relationship is something that will inevitably happen at some point. However, for Connie Francis, it was much darker with her father placing the love of her life in danger. The 1950s was a time of icons; Marilyn Monroe, Audrey Hepburn,...
RELATIONSHIPS・1 DAY AGO
Rolling Stone

A rally for supporters of the “Big Lie” is looking like a big flop. Reports from the start of the “Justice for J6” rally Saturday show an event much smaller than the January 6th Capitol insurrection. Video from on-scene reporters appears to show more members of the media in attendance than Trump-supporting protesters. Although Capitol Police expected as many as 1,000 attendees, and organizers obtained permits for a group of 700, the final turnout looks like it will be much lower, according to reports on the ground.
PROTESTS・6 HOURS AGO
centralrecorder.com

Mick Jagger Shook Thinking He Is Next To Die Amid Heart Problems And Upcoming Tour!

Is Mick Jagger Fearful of touring? One report states that the death of Charlie Watts Jagger is faced with his own mortality. The following is an extract from the National EnquirerJagger is concerned that he might be the next Rolling Stones member to die. A source explains, “Mick is definitely feeling his mortality after Charlie’s passing… it’s made him wonder if his own end is around the corner.” He underwent heart surgery in 2019, so he’s reportedly worried that his heart may give out “sooner than he wants.”
CELEBRITIES・4 DAYS AGO
Guitar Player

This historic performance was filmed 50 years ago in the ancient Roman amphitheater of Pompeii, Italy. Built around 70 BC it’s hard to imagine one of today’s venues surviving well over 2,000 years (or indeed what kind of performances might take place in the fifth millennium!) Regardless, this timeless rendition of “Echoes” still sounds powerful today.
ROCK MUSIC・10 DAYS AGO