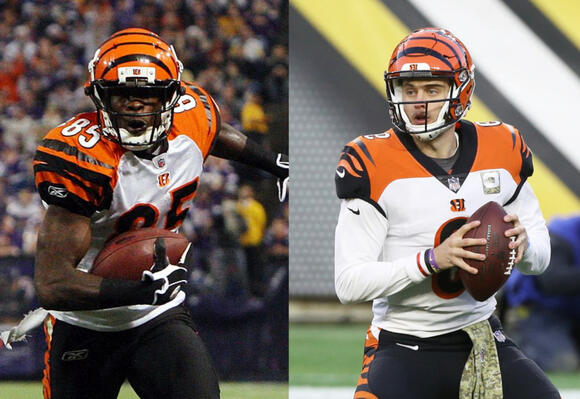 CINCINNATI — The Bengals are hoping to make a big leap this season after adding plenty of new faces over the past few months.

Quarterback Joe Burrow is 100% cleared after suffering a devastating knee injury last season and the team added key around him including Riley Reiff and Ja'Marr Chase.

Bengals legend Chad Johnson believes the team is not only going to turn things around—he thinks they're going to win the division.

"Bengals, most definitely. It's not even close," Johnson said on ESPN when asked who he thinks will win the AFC North. "This is a common sense pick based on what Zac Taylor has done thus far. If we don't win the AFC North, I promise you I won't eat McDonald's."

Ochocinco is famous for a lot of things, including his love for McDonald's, is going out on a limb with this prediction.

Taylor is 6-25-1 since he was hired in 2019. The Bengals have more talent this season, but they're in one of the best divisions in the NFL. The Browns, Ravens and Steelers all made the playoffs last season. Meanwhile, the Bengals only one four games. They have a lot of ground to make up if they're going to accomplish that feat.

Johnson was never afraid to make bold statements during his playing career. It's good to see that he still possesses that quality.

Make sure you bookmark AllBengals for the latest training camp news, including exclusive interviews, highlights and so much more!

Mike Brown Bullish on O-Line: They're Going to "Surprise People"

Sam Hubbard on Joe Burrow: "Nobody is Working Harder"

Bengals vs Browns: Which Trio Would You Take?

Which AFC North All-Stars Would You Pick?

Former LSU Football quarterback Joe Burrow was hit with the ultimate disrespect this week. Burrow, the first overall pick by the Cincinnati Bengals in the 2020 NFL Draft, was ranked far too low in NFL.com’s quarterback rankings. According to NFL.com’s Gregg Rosenthal, Burrow is the 26th best quarterback in the...
NFL・11 DAYS AGO
USA TODAY Sports Media Group

Joe Burrow's Bengals jersey heads to the Hall of Fame

Cincinnati Bengals quarterback Joe Burrow has a jersey headed for the Pro Football Hall of Fame. Burrow’s remarkable early comeback from a season-ending injury made for the big storyline during his team’s Week 1 win over the Minnesota Vikings. Somewhat lost in the buzz was the fact the Bengals were debuting their redesigned jerseys for the first time in the regular season.
NFL・4 DAYS AGO
ESPN

A young giraffe named for Cincinnati Bengals quarterback and former LSU star Joe Burrow died Wednesday, a day after falling ill. Officials at the Baton Rouge Zoo said in a release Thursday that the 20-month-old giraffe named Burreaux had died after developing a sudden onset of symptoms Tuesday, including a severe cough and overall agitation.
NFL・12 DAYS AGO
NBC Washington

With one throw, Bengals quarterback Joe Burrow showed everything of which he's capable

The Cincinnati Bengals had run the same play countless times in practice, but quarterback Joe Burrow had never finished it with a throw to tight end C.J. Uzomah until this week. While the Bengals prepared for their Week 1 matchup with the Minnesota Vikings, Cincinnati worked on one of its...
NFL・8 DAYS AGO
rockdalenewtoncitizen.com

Joe Burrow found C.J. Uzomah with a 32-yard pass on fourth-and-short late in overtime to set up the Cincinnati Bengals' season-opening 27-24 victory against the visiting Minnesota Vikings on Sunday. Two plays after Burrow's pass, rookie Evan McPherson nailed a 33-yard game-winning field goal for the Bengals (1-0) as time...
NFL・9 DAYS AGO
FanSided

Another example of the Bengals’ insane trust in Joe Burrow

Halftime Observations: Joe Burrow is Back, Bengals Have 14-7 Lead Over Vikings

CINCINNATI — The Bengals' offense got off to a slow start, but they scored back-to-back touchdowns late in the first half to take a 14-7 lead at halftime. Joe Burrow is back, but head coach Zac Taylor clearly wanted to be conservative with his star quarterback early in the game.
NFL・9 DAYS AGO

Podcast: The Mailbag Returns With Questions About Joe Burrow, Ja'Marr Chase and the Bengals' Defense

CINCINNATI — The Bengals kick off the regular season on Sunday against the Vikings. Jake Liscow and I answer questions about Ja'Marr Chase, Joe Burrow, the Bengals' defense and more, plus we play the schedule game!. Listen to Locked on Bengals below and follow on YouTube, iTunes, Spotify, Podbean or...
NFL・13 DAYS AGO
AllBengals

Joe Burrow on Bengals' Growth and Resilience: 'I Don’t Think We Win That Game Last Year'

CINCINNATI — Bengals quarterback Joe Burrow had a grueling offseason. Not only did he have to rehab his surgically repaired left knee, but he was also busy working on ways to improve his game. He showed off some of that improvement on Sunday, which included career-highs in yards-per-attempt (9.7) and...
NFL・8 DAYS AGO
AllBengals

CINCINNATI — Joe Burrow got plenty of cheers prior to the Bengals game against the Vikings on Sunday. Burrow suffered a torn left ACL and MCL last November. He missed the final six games of the 2020 season, but he'll start on Sunday against Minnesota. Watch the video below. Make...
NFL・9 DAYS AGO
Cincy Jungle

After missing the second half of his rookie season with a gruesome left knee injury suffered in a loss to Washington, Cincinnati Bengals quarterback Joe Burrow is ready for his second pro season. Burrow dismissed concerns about the surgically repaired left knee in a sit-down interview with ESPN’s Dan Graziano.
NFL・14 DAYS AGO

How Joe Burrow's improved velocity could have Bengals thinking playoffs

CINCINNATI — Something was different about Cincinnati Bengals quarterback Joe Burrow this offseason. It wasn’t just the brace protecting his surgically repaired left knee. Or the orange practice jerseys that are part of the uniforms for the upcoming season. The ball looked faster coming out of his hand. Receivers struggled...
NFL・13 DAYS AGO
USA TODAY Sports Media Group

Cincinnati Bengals quarterback Joe Burrow and fifth-overall draft pick Ja’Marr Chase cleared some notable hurdles in the second quarter of Sunday’s game against the Minnesota Vikings. On a solid touchdown march down the field to tie things up at seven just before halftime, Chase caught a pair of big passes,...
NFL・9 DAYS AGO
WLWT 5

Bengals Joe Burrow expects to return in 2021 better than ever

CINCINNATI — Cincinnati Bengals quarterback expects to return in 2021 better than ever. Nine months after tearing both the ACL and MCL in his left knee, the 24-year-old Burrow was asked Wednesday if he will be back to normal this season. He took issue with the word "normal." “I expect...
NFL・13 DAYS AGO
Minneapolis Star Tribune

Sunday: Noon at Paul Brown Stadium (Ch. 9 and KFAN-FM 100.3) • After a 4-11-1 season, the Bengals continued a roster overhaul around quarterback Joe Burrow, moving on from familiar stars like receiver A.J. Green and defensive tackle Geno Atkins this offseason. First-round receiver Ja'Marr Chase and veteran linemen Riley Reiff and Trey Hendrickson, who had 13.5 sacks last year in New Orleans, were their top additions.
NFL・11 DAYS AGO
ClutchPoints

Cincinnati Bengals 2020 No. 1 overall pick Joe Burrow suffered a brutal season ending ACL injury a year ago. Fast forward to the start of the 2021 campaign, and the signal caller for the Bengals has put that injury behind him as he focuses in on Week 1 against the Minnesota Vikings. Via the team YouTube channel, Burrow talked about his own expectations for this season.
NFL・13 DAYS AGO
Columbus Dispatch

What the world saw of Cincinnati Bengals quarterback Joe Burrow in 2020, his rookie season, was just a glimpse of what he expects to be in his second year. Burrow has high expectations for himself and if his words come to fruition, the Bengals will be in good shape. “I...
NFL・13 DAYS AGO
chatsports.com

Remember just a few months ago when Cincinnati Bengals fans were clamoring for video - a photo even - of quarterback Joe Burrow moving around on the knee that required surgery after a season-ending injury in 2020?. The video the Bengals shared Thursday afternoon - with the 2021 National Football...
NFL・12 DAYS AGO
FanSided

Bengals: 3 ways Joe Burrow can shine vs. Vikings in Week 1

The Cincinnati Bengals take on the Minnesota Vikings this Sunday at 1:00 EST and Joe Burrow makes his highly anticipated return to the field. Here are three ways that Burrow can shine against the Vikings’ defense. 1. Let Joe Mixon take pressure off him throughout the game. Burrow will have...
NFL・11 DAYS AGO