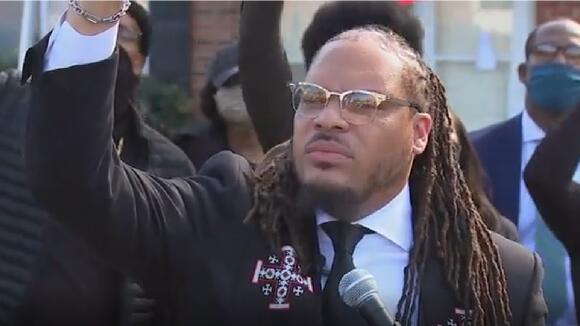 A well-known central North Carolina pastor and civil rights activist will face a judge Wednesday. Reverend Greg Drumwright will be inside an Alamance County courtroom standing trial months after an incident at a march designed to get people excited to vote in the 2020 presidential election. The march happened on October 31, the last day of early voting. Drumwright lead a group, with a law enforcement escort, from Wayman's Chapel AME Church to Court Square. At the square, the group held a rally with various speakers talking about the importance of voting. Eventually, deputies deemed the assembly of around 200 people unsafe and unlawful. That's when deputies started pepper spraying participants --including a 5-year-old girl. Deputies said they also discovered a gas can and a generator at the demonstration. They determined that was a fire hazard. WATCH: Police, march organizers differ on what happened in Graham

Police explain why actions were taken to end Graham protest march. The organizer vows to come back bigger and better with an event on Election Day.

After the chaotic scene, law enforcement filed felony charges against Drumwright for assault on an officer and obstructing justice. Drumwright said those charges are a form of retaliation against him. Drumwright and his legal team, which includes world-famous attorney Ben Crump, are scheduled to host a press conference at 4 p.m. Stay with ABC11 for updates.

Crowd shows up to Johnston County school board meeting for mask discussion; vote to happen next week

The board will vote on its mask requirement next week.
JOHNSTON COUNTY, NC・2 DAYS AGO
ABC11 Eyewitness News

"We support vaccines," said Raleigh Fire Local 548 President Andrew Davis. "However, we don't believe that any member's career should be stunted by a personal medical choice."
RALEIGH, NC・2 DAYS AGO
ABC11 Eyewitness News

'This is something we need to do': Durham Remembers event commemorates 9/11 at CCB Plaza

Durham city and county first responders will gather at CCB Plaza in downtown Durham at 8:30 a.m. on Sept. 11 for a Durham Remembers event to commemorate the 20th anniversary of the 9/11 terror attacks.
DURHAM, NC・6 DAYS AGO
ABC11 Eyewitness News

Governor Cooper to North Carolinians: If you're unsure about the vaccine, 'get off social media'

"How many people need to get sick and die because people don't get this miraculous vaccine?" Cooper said.
PUBLIC HEALTH・6 DAYS AGO