Four Capitol Police Officers Testify About Their Experience On Jan. 6 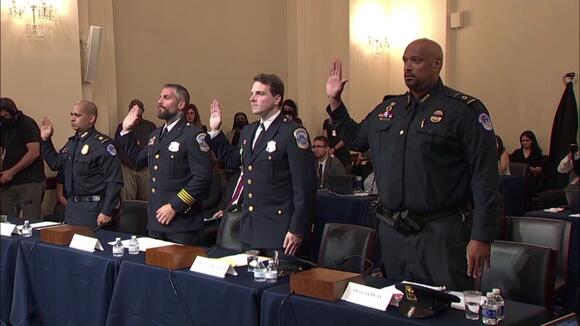 There is no word yet on when the House select committee investigating the Jan. 6 riot at the U.S. Capitol will hold their next hearing.

During the first hearing on Tuesday, four officers who defended the Capitol gave emotional testimonies.

All of the officers said they feared for their life.

One said he heard a rioter yell “get his gun and kill him with his own gun.”

The officers urged the committee to place blame on former President Trump, who they say encouraged rioters to storm the capitol. They say the rioters told officers “Trump sent us.”

So far, 540 people have been arrested in connection to the riot at the U.S. Capitol.

A high-ranking Capitol Police officer, who was also a vocal Donald Trump supporter, told those under his command not to wear riot gear on January 6, according to internal documents reviewed by CNN that detail allegations submitted to an officer tip line. In this case, an unidentified Capitol Police lieutenant...
LAW ENFORCEMENT・2 DAYS AGO
INFORUM

US Capitol Police: no wrongdoing in most probes in Jan. 6 riot

WASHINGTON, Sept 11 (Reuters) - The U.S. Capitol Police has not found evidence of wrongdoing in most internal probes related to the Jan. 6 insurrection and recommended disciplinary action in six cases, the department said on Saturday. The police bureau launched 38 internal investigations and was able to identify the...
PROTESTS・8 DAYS AGO
WTOP

Capitol Police call for discipline against 6 officers who responded to Jan. 6 riot

The U.S. Capitol Police has recommended disciplinary action against six officers who responded to Jan. 6 Capitol riot, the department announced in a news release Saturday evening. The violations that were sustained against the six officers included three cases of conduct unbecoming and one case each of failure to comply...
ADVOCACY・7 DAYS AGO
Axios

U.S. Capitol Police chief Tom Manger on Monday will brief congressional leadership about security preparations ahead of a Sept. 18 rally in support of jailed Jan. 6 rioters, two sources familiar with the meeting tell Axios. Why it matters: The "Justice for J6" rally, which is being organized by a...
PRESIDENTIAL ELECTION・11 DAYS AGO

Capitol Police ask Pentagon for help ahead of rally for Jan. 6 defendants

US Capitol Police have requested assistance from the Pentagon ahead of a planned rally in support of people charged in connection with the deadly Jan. 6 riot by supporters of former President Donald Trump. Defense Department press secretary John Kirby told reporters Wednesday that “we have received a request from...
PROTESTS・4 DAYS AGO
NBC News

A U.S. Capitol Police investigation into the conduct of officers during the Jan. 6 riot did not find any criminal behavior, but six officers were recommended for discipline for breaking rules, officials said Saturday. The agency reviewed 38 cases, in which the U.S. Attorney's Office had already found no evidence...
PRESIDENTIAL ELECTION・8 DAYS AGO
WUSA9

US Capitol Police release results of internal investigations into actions of 38 officers during the Jan. 6 riot

In 20 of the cases, no wrongdoing was found, U.S. Capitol Police said.
PROTESTS・8 DAYS AGO
newsy.com

Allies of former President Donald Trump are planning to hold another rally at the Capitol Saturday eight months after the deadly riots on January 6. The rhetoric ahead of the rally is the latest attempt to explain away the assault and obscure what played out for all the world to see: rioters battling police and attempting to stop Congress from certifying the election of President Joe Biden.
PROTESTS・6 DAYS AGO

CNN — The United States Capitol Police announced on Saturday that disciplinary action has been recommended against 6 officers following internal investigations into the January 6 attack on the US Capitol. Some of the reported violations are three cases for conduct unbecoming, one for failure to comply with directives, one...
LAW ENFORCEMENT・7 DAYS AGO
POLITICO

Capitol Police officers to get briefed on Sept. 18 rally against Jan. 6 arrests

Rank-and-file Capitol Police officers will get a briefing from their leadership on Friday about security preparations for next week’s rally defending those arrested during the Jan. 6 attack on the Capitol, according to two sources familiar with the department’s plans. The planned briefing follows pushback from officers about their lack...
PROTESTS・9 DAYS AGO
Washington Post

U.S Capitol Police found six officers guilty of violations during the Jan. 6 insurrection. The department launched 38 internal investigations, after reports that some officers assisted or supported pro-Trump rioters. In 12 of the 38 cases, there was not enough information to identify the officer involved, per the department, and...
LAW ENFORCEMENT・6 DAYS AGO
audacy.com

During the Jan. 6 insurrection, a U.S. Capitol Police officer allegedly disclosed the secure location of lawmakers to a friend of 40 years who reported him to the FBI for his actions. The pal said he was worried the cop had "fallen into a cult," according to a report. On...
PROTESTS・3 DAYS AGO
The Week

A Capitol Police officer facing allegations related to Jan. 6 was reported to FBI by a longtime friend, documents reveal

One of the six Capitol Police officers facing disciplinary action for misconduct stemming from the Jan. 6 Capitol riots was reported to the FBI by a friend of forty years, per discipline reports obtained by McClatchy. The officer, a special agent in the department's Protective Services Bureau facing allegations of...
LAW ENFORCEMENT・4 DAYS AGO
arcamax.com

A muscular police presence met a sparse crowd of right-wing protesters who headed to Capitol Hill on Saturday to support suspects in the deadly Jan. 6 assault on Congress. Cops in heavy riot gear stood guard as around 400 people gathered on a grassy field at the foot of the Capitol. A podium above the crowd hosted far-right speakers, who complained about the treatment of defendants in the harrowing January attack.
PROTESTS・1 DAY AGO
News 12

The crowd was sparse and incidents were few. The only clear parallels to the riots more than eight months ago by supporters of Donald Trump were the false claims put forth by the rally organizers about the violence that January day when Congress met to certify the election of Joe Biden.
WASHINGTON STATE・1 DAY AGO
lawandcrime.com

The U.S. Capitol Police on Saturday announced several arrests surrounding a protest over the treatment of various individuals connected to the Jan. 6th siege on the U.S. Capitol Complex more than eight months ago. One of the arrestees was a man who “appeared to” have brought a “handgun” into the...
PROTESTS・1 DAY AGO
arcamax.com

WASHINGTON — Several hundred supporters of Donald Trump demonstrated in Washington on Saturday amid a heavy police presence, protesting against the prosecutions of people who stormed the Capitol on Jan. 6. The event near the Capitol was much different than the rally-turned-riot in January, which was fueled by Trump’s false...
WASHINGTON, DC・1 DAY AGO
Indy100

A rally held in Washington DC on Saturday to honour those being prosecuted for taking part in the shocking Capitol riot on 6th January has been mocked on social media as reporters and police officers easily outranked those in attendance. It was a much more subdued scene in the US...
WASHINGTON, DC・17 HOURS AGO
KKTV

COLORADO SPRINGS, Colo. (KKTV) - Gabby Petito, the missing woman from Florida reportedly made a stop in Colorado Springs and the Great Sand Dunes while traveling across the country with her fiance, Brian Laundrie. According to Slice420, a pizza shop in Old Colorado City, Petito visited on July 8. 2021....
COLORADO STATE・2 DAYS AGO