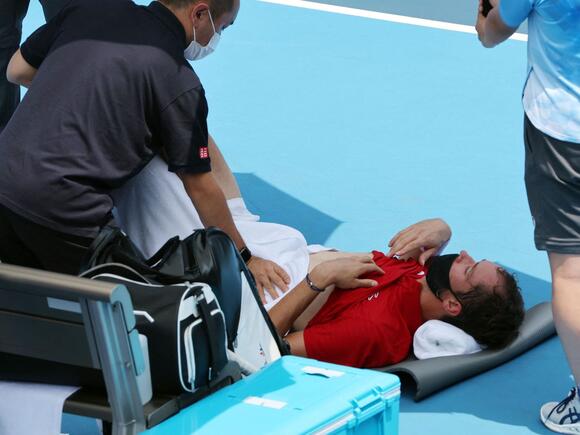 It's so hot in Tokyo that a tennis player asked Olympic officials if they'd take responsibility if he died.

It is not the first time an athlete in tennis has raised concerns over the conditions in which they are tasked to compete in, as the No.1-ranked player in the sport Novak Djokovic called the heat and humidity "very tough" earlier this week.

Temperatures have reached as high as 93 degrees Fahrenheit at certain points during the Tokyo Games , and those in tennis in particular have struggled to cope.

Daniil Medvedev, one of the top attractions in his game, is the latest to comment on how difficult it is to even breathe while playing the sport at such an oppressive time of the day.

Medvedev, of the Russian Olympic Committee (ROC) team, was visibly struggling in the men's singles third-round match against Italy's Fabio Fognini on center court at the Ariake Tennis Park in Tokyo.

He called a medical timeout, called the trainer numerous times, and his behavior midway through the second set - which he was losing - prompted the chair umpire to ask if he was able to continue.

"I'm fine," Medvedev said, according to Tennis 365 . He added: "I will finish the match, but I can die. If I die, is the ITF [International Tennis Federation] going to take responsibility?"

Despite Medvedev's alarming comments, the match continued. Both players, though, exercised the "extreme weather policy" - which allows a 10-minute break - before they began the third and final set.

Commenting afterwards, Medvedev said: "Even from the first set, I didn't feel good enough with my breathing. That's why I called the physio. I felt like my diaphragm was blocked.

"And then on the second set, I just had darkness in my eyes, like between every point, I didn't know what to do to feel better. Like I was bending over and I couldn't get my breath together so I was ready to just fall down on the court."

OMG such fragile "world class" athletes. Weather temps in the low 90s in Tokyo this week...try humping through the mountains of Afghanistan in 110 degree heat for 18 hours with an 80lb pack on + weapon + body armor.

At this point Sen everyone home. This Olymipcs is nothing but a bunch of sore lovers, and heat exhausted all stars. There is always next year. Not worth dying for a somersault and tennis ball.

Yikes these comments. I was with my state’s forestry division outside yesterday. With the heat at 95 and humidity reaching 85% we were drenched in sweat barely holding on. It was decided that we will be in doors today. Heat exhaustion is a real killer. People are dying everyday from it. You are sitting in your air conditioned houses or places with fans, laying down doing nothing and believe you can judge these people. Like okay, pop off I guess

I’ve been playing and watching tennis a long time and I have never seen anything quite like this. That’s why, when I was commentating on Emma Radacanu’s semi-final, I said that she must have been here before, even if it was in a previous life. As for the people who...
TENNIS・14 DAYS AGO
The US Sun

EMMA RADUCANU could join the ranks of tennis' leading stars after her U.S. Open success. The Brit, 18, collected a cheque worth £1.8million after her victory in New York, but that is set to rise considerably through sponsorship deals and endorsements. Agent Jonathan Shalit, chairman of InterTalent, has predicted big...
TENNIS・11 DAYS AGO
Daily Mirror

The world's richest tennis player has four times the net worth of two of the games’ most successful players, Roger Federer and Novak Djokovic. Former star Ion Tiriac, who played during the 1960s and 1970s, only pocketed around £200,000 during his career. Since then, the 1970 Roland Garros men’s doubles...
TENNIS・3 DAYS AGO
SPORTbible

Emma Raducanu has revealed what her first purchase will be after pocketing $2.5m (£1.81m) from her sensational US Open win...and it's not what you'd expect. Maybe a nice house, or a cheeky upgrade from your Fiat Cinquecento?. Nope. According to Metro, the 18-year-old told ESPN that the first thing she...
TENNIS・13 DAYS AGO

An Australian swimmer who won a gold medal at the Tokyo Olympics and competes for Los Angeles' team in the International Swimming League has been hospitalized after testing positive for COVID-19. Madison Wilson, 27, said she's fully vaccinated against the coronavirus when she announced on Instagram she'll be receiving treatment at a hospital.
PUBLIC HEALTH・4 DAYS AGO
The Independent

Former tennis star Andy Roddick has told people to ‘stop overreacting’ to Emma Raducanu’s medical break in the US Open final.Brit Raducanu skidded to try and return Leylah Fernandez’s shot during the last game of the match which resulted in the 18-year-old’s knee bleeding.At this point, Raducanu was leading by one set and five games to three in the second. Fernandez was on the verge of breaking her opponent when the break came in, with some claiming it had an influence on the match.Roddick disagreed and tweeted: “Everyone trying to kill joy by overreacting to the stoppage in play...
TENNIS・13 DAYS AGO
Daily Mail

The champion returns! Teen tennis ace Emma Raducanu is reunited with her father as she arrives at home in Kent after her sensational US Open triumph

Emma Raducanu was greeted by her proud father outside her Bromley home today - after her parents were stopped from seeing her US Open triumph in New York because of Covid travel restrictions. Ian, the motor behind Emma's tennis drive, lifted her arm victoriously aloft and then hugged his 18-year-old...
TENNIS・9 DAYS AGO
Indy100

Emma Raducanu may be US Open women’s champion, but when it came to trading volleys with the Duchess of Cambridge her tennis mantra was: “Don’t miss, don’t miss”. Raducanu, 18, revealed her nerves after she played a practice session with Kate, a keen tennis fan and player, and Britain’s other Flushing Meadows title winners during a homecoming event for the sports stars.
TENNIS・1 DAY AGO

U.S. Open champion Emma Raducanu has pulled out of next week's Chicago Fall Tennis Classic, according to multiple reports. The 18-year-old Raducanu recently returned to her home in England after being away for seven weeks. Raducanu is currently slated to play at the BNP Paribas Open at Indian Wells, Calif.,...
TENNIS・4 DAYS AGO
Tennis World Usa

'Rafael Nadal will continue to fight until...', says former No.1

At the start of the 2020 season, Rafael Nadal was 840 points ahead of Novak Djokovic at the top of the ATP ranking list, with two great rivals dominating the rest of the Tour in 2019. Rafa and Novak took all four Major titles and four Masters 1000 events in 2019, pushing each other to the limit and establishing the battle for world number one for the ATP Finals.
TENNIS・19 DAYS AGO
Insider

"People are like 'Oh, she quit,' but I'm not a quitter - I'm a fighter," Biles explained in a teaser of her next Facebook Watch docuseries episode.
CELEBRITIES・3 DAYS AGO
The Independent

Emma Raducanu has split from coach Andrew Richardson following her US Open triumph and is seeking an experienced mentor to help guide her through her next steps on tour.Richardson previously coached the 18-year-old at Bromley Tennis Centre and was chosen to accompany Raducanu on her US trip because of their familiarity with one another.Neither could have imagined where the partnership would lead and, despite the remarkable success it brought, Raducanu has decided she needs a coach with a WTA Tour pedigree. View this post on Instagram ...
TENNIS・1 DAY AGO

BEIJING, China. — U.S. athletes trying to make the Winter Olympics will have to be fully vaccinated for COVID-19 under a groundbreaking new policy announced Wednesday by the U.S. Olympic and Paralympic Committee. CEO Sarah Hirshland wrote in a letter obtained by The Associated Press that, starting Nov. 1, the USOPC will require staff, athletes […]
NFL・2 DAYS AGO
Los Angeles Times

The Ryder Cup is a very different golf tournament, and the unusual golf format of team play brings nervousness and excitement to the three-day event.
LOS ANGELES, CA・2 DAYS AGO
The Independent

England’s Paul Casey once feared he would never play in the Ryder Cup again, but is now targeting two more appearances in the biennial contest.Casey played in Europe’s successive nine-point victories in 2004 and 2006 – famously ending one match at the K Club with a hole-in-one – as well as the defeat at Valhalla in 2008.But he was then overlooked for a wild card in 2010 by captain Colin Montgomerie despite being ranked seventh in the world at the time, and was not even a member of the European Tour for a number of years before rejoining in...
GOLF・2 DAYS AGO
atlantanews.net

Bellary (Karnataka) [India], September 12 (ANI): JSW Group organised a felicitation ceremony at the Inspire Institute of Sport in Bellary that had Neeraj Chopra, Bajrang Punia, Ravi Dahiya and PR Sreejesh in attendance to recognise and reward India's best-ever performance at an Olympic Games. The Saturday afternoon began with the...
SPORTS・13 DAYS AGO
uticaphoenix.net

The biggest feel-good moments from the Tokyo Olympics

TOKYO — Athletes didn’t have their family members in the stands cheering them on. The stadiums and venues were largely empty. There were nonstop COVID-19 protocols and restrictions — and a looming threat of testing positive for the virus and being deemed ineligible to compete in the Tokyo Games. It...
SPORTS・13 DAYS AGO
newsbrig.com

Shreeshanar’s father, Murali, who is also his coach, has been removed from the position after the Olympics. Shreeshankar was way below his best at the Games, and could not even qualify for the final of his event. The AFI also decided to conduct trials before events, to select the final team.
SPORTS・11 DAYS AGO
The Guardian

‘This girl means serious business’: the making of Emma Raducanu

Emma Raducanu’s unprecedented run to the US Open final so soon after committing to the sport is not the first time she has burst through and demanded attention. In November 2015, only three days after her 13th birthday, which meant she could finally compete in international under-18 tournaments, Raducanu travelled up to Liverpool for the Nike Junior International tournament. Five matches later, she had won the event.
TENNIS・15 DAYS AGO
goodmenproject.com

Athletes, spectators and the many thousands of officials and members of the media attending the events due to start in late July might be concerned about Covid. But they will also have to deal with the impacts of climate change, and the Olympic cauldron that is heating up to receive them.
SPORTS・14 DAYS AGO