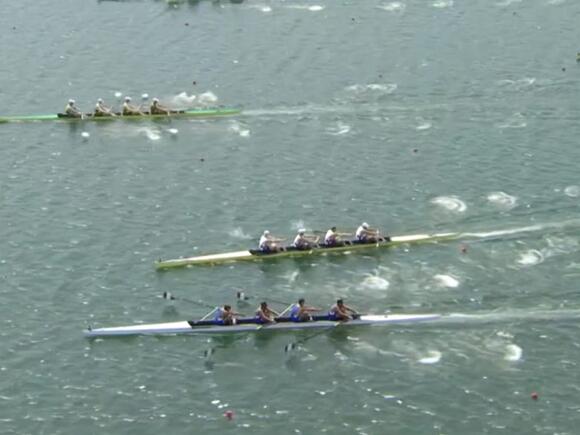 Heavy favorites Team GB suffered an embarrassing day on the water during the men's coxless four rowing event at the Tokyo Olympics, almost crashing, failing to win gold for the first time in two decades, and then attacking former athletes.

Team GB was favorite for the event having won five gold medals in succession, a run dating back to 2000, but the dominance could hardly have come to a more chaotic end.

As the teams approached the finish line, the Brits were level with Italy in second behind leaders Australia, but soon Team GB began veering off to the left.

With Great Britain and Italy no more than a few feet away from each other, the Brits straightened but the damage was already done. The team knocked itself out of medal contention and also allowed Romania to overtake Italy and take silver.

"We fully biffed into the Italians. They are pretty pissed off because maybe we cost them the silver and sorry to those guys.

"It's an outdoor sport and this stuff happens. It's just heartbreaking when it's you and not something on YouTube." Rossiter said before taking a swipe at his predecessors.

The 31-year-old suggested some former GB rowers would be "really smug" to see the team fail, the latest bit of antagonism between the current team and former winners.

"It's just disappointing that those people will probably be really smug now that they are part of the legacy that won," Rossiter said.

Rossiter did not name any names, but it is likely he was referring to James Cracknell, who won gold in Sydney 2000 and Athens 2004, and has been highly critical of the current team.

"Someone in the British crew blew up. The only way your steering goes like that is when somebody totally runs out of juice," Cracknell said after the race, per the Daily Telegraph.

GB rowing has also been heavily criticized by former athletes for allowing the departure of long-time head coach Jürgen Gröbler, who coached every British Olympic team from 1992 to 2016. Gröbler left Team GB just 11 months before the games.

"You do not allow Grobler to stand down a year before a delayed Olympic Games," Garry Herbert, who won gold in 1992, said, per the Telegraph.

While GB's rowers were unhappy with ex-athletes, the team was remorseful about its failures on the day.

"I do ( the steering). I need to diagnose it but I feel I screwed up a bit and as I was closing in at the end and taking big strokes at the end going for the line. I forgot the steering and that's what cost us to be honest, cost us a medal," team member Oliver Cook said.

"All I can say is thank you to everyone who stayed up to watch tonight and I'm really sorry we're not coming back with something."

Former world No. 1 Simona Halep is taking a break in her WTA schedule: She married boyfriend Toni Iuruc Wednesday
TENNIS・2 DAYS AGO
Insider

Simone Biles opened up about the injury on Instagram, saying she immediately felt the rib "crack" but continued to perform anyway.
CELEBRITIES・15 DAYS AGO
Insider

"If I work on my game and pull it together, then maybe it will happen one day," Raducanu told journalist Jeanette Kwakye.
TENNIS・2 DAYS AGO

Inside the fascinating life of US Open champion Emma Raducanu, who loves motorsports and is fluent in Mandarin

Emma Raducanu, 18, is the biggest name in tennis right now having won just the US Open without dropping a single set.
TENNIS・1 DAY AGO
bardown.com

On one of the final days in Tokyo, one of the most remarkable and dramatic stories we have ever heard of took place that has us completely speechless. As Belgian wheelchair racer, Peter Genyn, arrived at the venue where the Men’s 100-metre T51 final was set to take place, he showed up only to be met with the absolutely heartbreaking news that his wheelchair had been badly damaged.
CYCLING・14 DAYS AGO
fordcountyrecord.com

TOKYO – Purdue University's Evan Austin completed his journey from world champion to Paralympic Games champion, emerging victorious in a hotly contested race to win gold for Team USA in the 50-meter butterfly (S7). Austin was the top finisher in the prelims (29.71) and final (28.98) of the event, but...
SWIMMING & SURFING・12 DAYS AGO
whitewaterbanner.com

“USA Basketball domination in Tokyo continued into September. Mere weeks after the U.S. men and women won basketball gold medals at the Tokyo Olympics, the men’s wheelchair team also laid claim to gold with a 64-60 win over host Japan on the final day of Paralympic competition Sept. 4. It’s...
MILWAUKEE, WI・12 DAYS AGO

GERMANTOWN, WI (CBS 58) - After winning a state title earlier in the year, Germantown junior Kamorea "KK" Arnold now adds gold medalist to her resume. "It felt really good, especially Canada being one of the big rivals," said KK Arnold. Arnold and Team USA rolled through the FIBA Americas...
GERMANTOWN, WI・14 DAYS AGO
SELF

The Team USA women’s sitting volleyball team earned Paralympic gold over China in four sets on the final day of competition in Tokyo, bringing a historic end to the Games for the U.S. athletes. That’s because the feat completes a never-before-seen sweep of women’s Paralympic and Olympic volleyball medals by...
SPORTS・13 DAYS AGO
Washington Examiner

The U.S. men's wheelchair basketball team beat Japan 64-60 on Sunday, winning the gold medal at the Tokyo Paralympic Games. The U.S. team recovered after trailing by five points in the fourth quarter, pulling ahead just in time to beat the Japanese team in the Ariake Arena. TRUMP WANTS TO...
SPORTS・13 DAYS AGO
Bleacher Report

Out of the 18 Bulldogs who competed in the Tokyo Olympics this past summer, 11 were rowers representing six different countries. Four of these Olympic rowers spoke to the News about their experiences: Former Yale heavyweight rower Charlie Elwes ’19 represented Great Britain in the men’s eight. Andrin Gulich ’22, who is currently on a leave of absence, rowed in Switzerland’s men’s four. Current students Christina Bourmpou ’25 and Dan Williamson ’23, competed in Greece’s women’s pair and New Zealand’s men’s eight, respectively. Two Yale rowers walked away with medals: Elwes with bronze and Williamson with gold. Williamson’s gold is Yale heavyweight crew’s first gold medal since 1964.
SWIMMING & SURFING・11 DAYS AGO
ABC11 Eyewitness News

Randolph Ross, a graduate of Garner Magnet High School, won a gold medal in the men's 4x400 relay at the Summer Olympics in Tokyo. The town honored him Tuesday night.
GARNER, NC・11 DAYS AGO
paddleyourownkanoo.com

Olympic boxing medalist and two-time world professional boxing champion, Amir Khan says he has been left “disgusted” and “heartbroken” after he and his work colleague were “kicked off” an American Airlines flight by police on Saturday morning for a face mask non-compliance violation. The British pro boxer, promoter and philanthropist...
SPORTS・14 HOURS AGO
Daily Mirror

Veteran full-back Dani Alves has become a free agent just one month after captaining Brazil to the football gold medal at the Olympics. The 38-year-old - who won his 119 th international cap for the senior squad during the recent international break - has left Sao Paulo, his boyhood club.
SPORTS・5 DAYS AGO
WJTV.com

MADISON, Miss. (WJTV) – Germantown’s Madison Booker won the gold medal at the 2021 FIBA Americas U16 Women’s Championship in Guanajuato, Mexico. The junior basketball star tells us about her experience playing in one of the most prestigious junior basketball championships.
MADISON, MS・9 DAYS AGO
theridernews.com

Going for the gold and green: sustainability at the 2020/2021 Olympics

Community is often the first word that comes to mind when thinking about a return to the Rider campus this fall. For the first time since March of 2020, our talented, diverse community will once again roam the Lawrenceville campus — a reunited herd of Broncs ready to rejoin one another in the safety and comfort of our academic home. Among all of the troubling headlines of the summer, many of which pointed to the devastating effects climate change is increasingly wreaking on the planet, uplifting stories of another community gathering shined brightly as our global elite athletes met in Tokyo for the delayed 2020 Summer Olympics. A much-beloved tradition, the Olympics once again served as a unifying event aimed to entertain, inspire and unite both athletes and spectators from around the world. Perhaps, more than ever, the focus was not only “going for the gold” but “going green” too.
SPORTS・4 DAYS AGO
RunnersWorld

Molly Seidel had raced exactly zero marathons before she placed second at the U.S. Olympic Marathon Trials in February 2020; her bronze medal-winning run at the Tokyo Olympics in August 2021 was just her third time competing in the 26.2 distance. It’s important to note, though, that Seidel already had...
SPORTS・3 DAYS AGO
ABC Action News