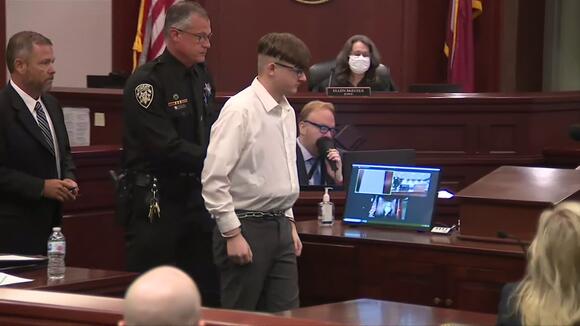 Robert Long, the man accused of shooting and killing eight people at Georgia spas in March, pleaded guilty to charges in one county on Tuesday.

He was charged for killing four people at Young’s Asian Massage in Cherokee County,

Young was sentenced to life without parole on all four counts of malice murder.

In August he will be arraigned for killing four people at two different spas in Fulton County.

The Fulton County district attorney is seeking the death penalty and hate crime enhancements based on race, national origin, sex and gender.

BENTON COUNTY, Ark. (KNWA/KFTA) — The driver accused of hitting Pea Ridge Officer Kevin Apple with a vehicle in July has pleaded not guilty to capital murder. Shawna Cash, 22, entered a not guilty plea to all charges on September 15. Her next court appearance will be in December. Cash...
BENTON COUNTY, AR・4 DAYS AGO
WGAL

MANCHESTER TOWNSHIP, Pa. — Three people in York County have pleaded guilty in connection to a 2019 homicide. Tysheem Santiago, 21, Montrice Gibson, 28, and Dazanie Gibson, 20, were involved in the death of Stefen Simmons in January 2019. Simmons was shot in the front yard of a home along...
YORK COUNTY, PA・10 DAYS AGO
The Independent

A judge killed himself moments before he was to have been arrested on allegations he had a hidden camera that captured images of naked boys in his bathroom.Jonathan Newell, 50, had been on leave from his role as a circuit judge in Maryland’s Caroline County since July after allegations were made against him.When FBI agents arrived at his home in Henderson, Maryland, on Friday morning to arrest him on a federal criminal complaint they found him “suffering from an apparent self-inflicted gunshot wound.”The Maryland US Attorney’s Office confirmed that the judge had been pronounced dead at 6.43am.“Maryland State Police will...
CONGRESS & COURTS・9 DAYS AGO

MINNEAPOLIS (WCCO) — A northern Minnesota man pleaded guilty to second-degree murder Monday, admitting he shot another man in the head with a shotgun last November. According to the Beltrami County Attorney’s Office, Montana Cutbank admitted that on Nov. 24, 2020, he was in the backseat of a car that stopped at a home near Cass Lake. (credit: Beltrami County) A man came out of the house to talk to the people in the vehicle, and Cutbank admitted to shooting and intentionally killing that man, the attorney’s office said. Cutbank will be sentenced Oct. 15.   More On WCCO.com: Mohamed Noor Murder Conviction Reversed: MN Supreme Court Orders Ex-MPD Officer Be Sentenced For 2nd-Degree Manslaughter Chanhassen Named Best Place To Live In The Country, According To Money Magazine ATF Says Auto Sears Are Becoming More Common In Twin Cities Eden Prairie Police: Body Found Fits Description Of Mike Elhard
BELTRAMI COUNTY, MN・6 DAYS AGO
KHBS

SEBASTIAN COUNTY, Ark. — Johnathan Massey has pleaded guilty to two murder charges in Sebastian County. Massey is accused of killing Carroll Wayne Elmore and Sharon Biane Bernard last year. Massey was sentenced to 70 years in the Arkansas Department of Correction. He will be eligible for parole in 49...
SEBASTIAN COUNTY, AR・6 DAYS AGO
Houston Chronicle

A Richmond family can rest assured that their patriarch’s murderers are headed to prison for a long time. Terrell Derrick Funches, 23, and Dalena Nguyen, 19, both of Houston, were each found guilty of murder and sentenced to 40 years in prison for the slaying of Richmond’s Altaf Hussain Malik, 44.
HOUSTON, TX・5 DAYS AGO

STATESVILLE, N.C. (WBTV) - A man wanted for a murder warrant in Iredell County was arrested today in Cobb County, Georgia. Tyrell “Lil Buckey” Dontaye Daniels was wanted in connection with a shooting near 1309 Williams Road in Statesville on June 8. The victim, Zion Treyshun Gaither, died from injuries sustained during the shooting.
GEORGIA STATE・11 DAYS AGO
pahomepage.com

EYEWITNESS NEWS (WBRE/WYOU) — Harold David Haulman III, who was suspected of killing two women, pleaded guilty to the murders in Luzerne County court Wednesday. Haulman was given two life sentences without the possibility of parole. He entered the guilty plea to avoid the death penalty. “I’ve been doing this...
LUZERNE COUNTY, PA・11 DAYS AGO
WLWT 5

PIKE COUNTY, Ohio — An Ohio woman pleaded guilty Friday to helping plan the killings of eight members of a family, becoming the second member of her own family to admit to a role in a shocking crime prosecutors say stemmed from a dispute over custody of her granddaughter. Angela...
PIKE COUNTY, OH・9 DAYS AGO
WDTN

MIAMI COUNTY, Ohio (WDTN) – A 30-year-old man charged with murder of a one-year-old pleaded not guilty Thursday in Miami County. Joshua A. Mize, of Bradford, who is accused of murder following the suspected abuse of Caelyn Colon, entered a not guilty plea. His bond was set to $1 million.
MIAMI COUNTY, OH・3 DAYS AGO

A Bridgeport gang member pleaded guilty last week to attempted murder charges for the shooting of four rival gang members early last year. Marquis Isreal said he and other members from Original North End planned to kill members from a rival gang, East End, after one of their members shot Isreal.
BRIDGEPORT, CT・5 DAYS AGO
prentissheadlight.com

Desmond Fortenberry pleads guilty to the murder of Carlos Taylor

A special session was held in Lawrence County Circuit Court Monday with Judge Anthony Mozingo regarding the sentencing of Desmond Fortenberry. A trial was scheduled for later this month, but Fortenberry accepted a plea deal in return for a likely shorter sentence. Fortenberry was accused of killing Carlos Taylor on...
PRENTISS, MS・5 DAYS AGO
WCPO

A Pike County woman admitted Friday that she had conspired to commit aggravated murder in the 2016 slayings of eight people, including the mother of her own granddaughter. Angela Wagner, who prosecutors accused of helping her sons and husband stalk and kill the victims, pleaded guilty to conspiracy, aggravated burglary, tampering with evidence, forgery, unauthorized use of property and unlawful possession of a dangerous ordinance.
PIKE COUNTY, OH・9 DAYS AGO
hawaiinewsnow.com

HONOLULU (HawaiiNewsNow) - The Schofield Barracks soldier who pleaded guilty to murdering his wife was sentenced by a military judge Tuesday to 62 years behind bars. Sgt. Raul Hernandez-Perez, 24, of Florida, will also be dishonorably discharged. In a surprise turn of events, Hernandez-Perez pleaded guilty in court on Monday...
HAWAII STATE・5 DAYS AGO
NewsChannel 36

Steuben County woman pleads guilty in 2020 murder of her husband

A Paso Robles man pled guilty in court on Wednesday to the first-degree murder of his girlfriend and the second-degree murder of their unborn baby. Because of his plea, Daniel Raul Rodriguez Johnson will be sentenced to life in prison without the possibility of parole, rather than facing the death penalty.
PASO ROBLES, CA・10 DAYS AGO
wizmnews.com

Suspects in triple murder plead “not guilty,” trials will be scheduled

Two men charged in a recent triple murder in La Crosse have entered pleas of “not guilty.”. Nya Thao and Khamthaneth Rattanasack entered their pleas today before Judge Elliott Levine, and will be scheduled for trial on homicide charges. The suspects are accused of fatally shooting three young men…Nemo Yang,...
LA CROSSE COUNTY, WI・9 DAYS AGO