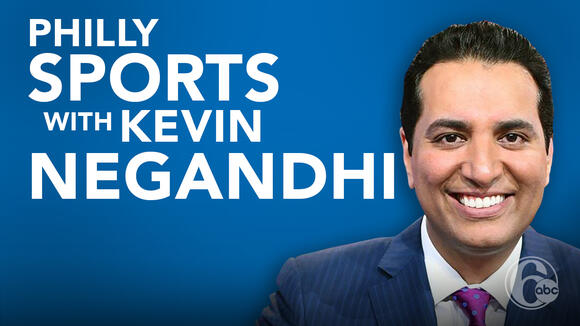 Trea Turner singled in the first inning and scored on Josh Bell's three-run homer that put the Washington Nationals ahead to stay, but their shortstop was then pulled from the game because of a positive COVID-19 test and never played defense in a 6-4 win over the Philadelphia Phillies on Tuesday night. Juan Soto hit another three-run homer for the Nationals in the second. After Turner got his one-out hit, he moved to third on a single by Soto before Bell hit his 16th homer. Turner then went back to the dugout, and directly down the tunnel toward the clubhouse, never taking the field in the bottom of the inning. "I found out right after he scored," manager Dave Martinez said. "I had to pull him right out of the game. He's got to get isolated right away. Now, he'll get tested and from there we'll see what happens." Josh Harrison doubled and had two hits for the Nationals, who snapped a five-game losing streak but still have won only twice in their past 15 games. While Turner will miss time because of MLB's COVID-19 protocols, the Nationals will be without right-hander Stephen Strasburg the rest of the season. Martinez said before the game that the pitcher would have season-ending neck surgery on Wednesday. "With all the things we've gone through, I'm proud of these guys," Martinez said. "They don't quit." Bryce Harper hit his first career inside-the-park homer, doubled and drove in a pair of runs for Philadelphia. Andrew McCutchen also went deep for the Phillies. "Tough night for us," Harper said, "but I thought we battled the best we could throughout the game and never gave up." Philadelphia lefty Matt Moore (0-3) allowed six runs, on those two Nats homers, while throwing six innings. Harper got his 16th homer in the fifth, when he drove a 1-1 changeup from Erick Fedde deep to left-center. Victor Robles leaped for it, but it was out of his reach and bounded hard off the wall toward center. Soto came over from right field to retrieve the ball, but his throw had no chance of getting Harper, whose slide into home wasn't even needed. 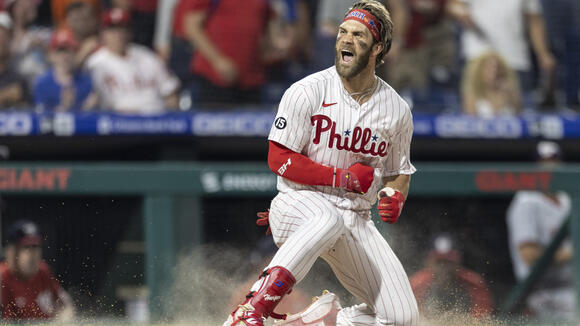 Harper said he probably hit an inside-the-park homer as a Little Leaguer, but he couldn't recall an exact time. "Hitting one right there was pretty cool," he said. "I was pretty happy and fired up in that situation." McCutchen, who hit a game-ending three-run homer in the series opener Monday, followed with a solo shot. Fedde was done a batter later after giving up a single to Rhys Hoskins, and allowed four runs on eight hits with four strikeouts and a walk in 4 2/3 innings. Wander Suero (2-2), the second of four relievers who combined for 4 1/3 scoreless innings, retired all five batters he faced. Brad Hand, who had blown two straight saves, finished it off for his 21st save.

The three-time All-Star felt discomfort after a 27-pitch bullpen session last week and saw a specialist Monday. Strasburg (1-2, 4.57 ERA in five starts this season) was diagnosed with neurogenic thoracic outlet syndrome. Martinez said the surgery will be done Wednesday by Dr. Greg Pearl in Dallas on Wednesday. The 2019 World Series MVP is expected to be ready for the start of spring training next year.

Nationals: Robles was removed from the game during his at-bat in the ninth inning. Robles grabbed at his lower back after fouling off a pitch, and Martinez confirmed afterward that he had tightness in his lower back on his right side. Phillies: Seranthony Dominguez threw a simulated game. The right-handed reliever had Tommy John surgery last July and hasn't pitched since 2019. He hopes to begin a rehab assignment next week and return to Philadelphia in late August or early September. ... RHP J.D. Hammer was reinstated from the COVID-19 IL.

The Phillies needed to pick up ground in the NL East this week and, so far, both they and the Dodgers have done their part. The Phils have opened the week with consecutive road wins over the Nationals, while the Braves have dropped two in a row in Los Angeles.
MLB・17 DAYS AGO
inquirer.com

Longtime Phillies announcer Larry Andersen has the reputation of telling fans what’s on his mind. And Tuesday night, that meant calling out everyone involved with the team, including slugger Bryce Harper. These days, Andersen calls games on the radio only when the team is playing at Citizens Bank Park. So...
MLB・3 DAYS AGO
fastphillysports.com

WHY PHILS BRYCE HARPER IS A REAL HALL OF FAME CANDIDATE!

Bryce Harper is having the year of his life. Maybe even better than his 2015 MVP year with the Nats. And he has kept the Phils in the race for a playoff spot. So, he might get another MVP at season’s end. But baseball seer Jayson Stark is raising the...
MLB・14 DAYS AGO
The Good Phight

Is Bryce Harper in the midst of the greatest offensive season in Citizen’s Bank Park history?

Which Phillies player had the greatest offensive season in Citizen’s Bank Park History? Was it Chase Utley? Ryan Howard? Bobby Abreu? Aaron Altherr? (Okay, I’m mostly kidding about that last one, but Altherr did have a .954 OPS and 143 wRC+ at home in 2017.) Utley had a .458 wOBA...
MLB・9 DAYS AGO

Bryce Harper crushes a two-run home run to center field, scoring Jean Segura to give the Phillies' an early 2-0 lead in the 1st.
12 DAYS AGO
FanSided

BRYCE HARPER’S 29TH JACK GOT PHILS OFF TO A GREAT START!

Bryce Harper stroked a solo home run, his 29th of the year, giving the Phillies a 1-0 lead in the 1st inning. Harper then walked in his next three at-bats as the Brewers seemed willing to pitch around Harper and try their luck with the rest of the lineup. “I...
MLB・9 DAYS AGO
MLB Game Highlights

Bryce Harper sneaks one over the wall in right-center to get the Phillies on the board and tie the game in the 4th inning.
13 DAYS AGO

As Bryce Harper’s teammates disappear, he becomes more and more visible, and more and more valuable. As in, the most valuable. He plays hurt, he plays hard, and he’s playing his best when it matters most, keeping the Phillies relevant in the National League East and wild-card races; they were 2½ games behind the Atlanta Braves on Thursday, three games behind the San Diego Padres and two behind the Cincinnati Reds in the wild-card race. Will their postseason fate matter when the votes are tallied?
MLB・9 DAYS AGO
MLB Game Highlights

Bryce Harper smashes an opposite-field solo home run to left for his 30th dinger of the season, giving the Phillies a 1-0 lead in the 1st.
9 DAYS AGO
inquirer.com

Rhys Hoskins returned Thursday afternoon to Citizens Bank Park, joining the Phillies for the first time since undergoing season-ending surgery to repair an abdominal tear. “It was great to see him,” manager Joe Girardi said. The Phillies miss Hoskins’ production in their lineup and his presence in the clubhouse. But...
MLB・9 DAYS AGO
philliesnation.com

The Phillies were a strike away from a series-opening victory against Colorado. All closer Ian Kennedy had to do was make one pitch to Ryan McMahon, who came in to pinch-hit for Yonathan Daza. McMahon saw four fastballs in the at-bat and fouled off three of them. The fifth was a curveball that hung on the lower inside part of the plate. Just like that, the Phillies were down by a run.
MLB・10 DAYS AGO

Bryce Harper should be the MVP

Listen, I’m a man of few words. Bryce Harper should be the MVP of the league this year, regardless of what happens the remainder of the season. Making the playoffs would obviously win him more votes among the unenlightened, but anyone who knows the game knows that without Harper on the team, they’re borderline unwatchable.
MLB・1 DAY AGO
fastphillysports.com

After going 0 for 8 with four strikeouts the previous two games (both losses) in Milwaukee, J.T. Realmuto was not in the Phillies' starting lineup for the first game of a four-game series against Colorado on Thursday night. "Just a day," manager Joe Girardi said. "He's played every day here....
MLB・9 DAYS AGO
MLB

There has been so much talk lately about Bryce Harper’s other-worldly production since the All-Star break, and how he not only elevated himself into contention for the National League Most Valuable Player Award, but how he almost single-handedly kept the Phillies in postseason contention the past few weeks. But Harper...
MLB・1 DAY AGO

NEW YORK (AP) — Jean Segura had his first multi-homer game in almost five years and Aaron Nola snapped a nine-start winless streak, leading the surging Philadelphia Phillies over the New York Mets 5-3 Saturday. Bryce Harper drove in two runs to help Philadelphia win its fourth in a row and hurt the Mets’ flickering playoff hopes. The Phillies began the day two games behind Atlanta in the NL East. They stayed 2 1/2 games in back of St. Louis for the second NL wild-card spot. The Mets lost their fifth straight and tied a season high by falling five games under .500. Segura...
MLB・5 HOURS AGO
inquirer.com

Phillies move within one game of first place; Jean Segura, Bryce Harper deliver big hits in 5-3 victory over the Mets

NEW YORK – Bryce Harper as a one-man Phillies offense has been a popular, repeatable narrative over these last few weeks. One problem: It isn’t quite true. Jean Segura has been a worthy sidekick to the hottest hitter on the planet and the prohibitive favorite for the National League MVP award. And although Harper came through yet again here Saturday night, capping an eight-pitch at-bat with a two-run double for the winning margin in a 5-3 win over the New York Mets, Segura delivered two tone-setting swings.
MLB・5 HOURS AGO
Sportsnaut