Workmen digging a well in a man's backyard discovered a $100 million windfall: a 2.5 million-carat sapphire cluster 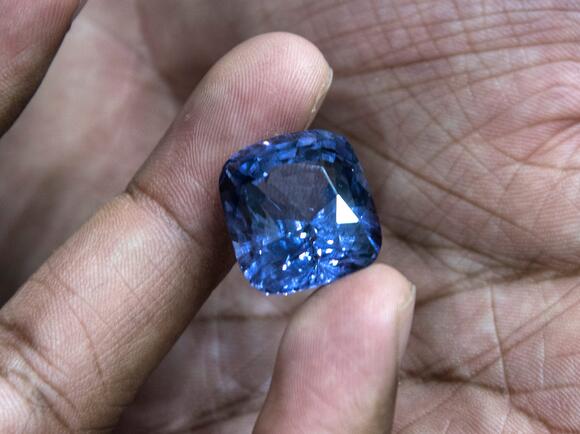 Workers digging a well in the backyard of a Sri Lankan gem trader stumbled upon a 2.5 million-carat sapphire cluster, the BBC reported on Tuesday .

The lucky find was made in the southern city of Ratnapura, known as Sri Lanka's "city of gems." The cluster, named the "Serendipity Sapphire," is a staggering 39 inches long and 28 inches wide, The Nation, an English-language newspaper in Sri Lanka, reported .

Gamage, a third-generation gemstone trader and owner of the stone, told the BBC that it had taken over a year to wash off the 1,124-pound cluster, analyze the stone, and certify it.

"The person who was digging the well alerted us about some rare stones," Gamage, who declined to give his full name, told the BBC. "Later we stumbled upon this huge specimen."

What tipped him off that the find could be worth an astronomical sum was that high-quality sapphires kept chipping off while he was cleaning impurities off the rock, he said.

Experts have valued the sapphire cluster at up to $100 million, the BBC reported.

"I have never seen such a large specimen before," Gamini Zoysa, a gemologist, told the BBC. "This was probably formed around 400 million years ago."

Thilak Weerasinghe, the chair of Sri Lanka's National Gem and Jewelry Authority, told the BBC that the sapphire would likely be of interest to private collectors and museums, considering its size and value.

The Serendipity Sapphire alone could be worth a significant portion of Sri Lanka's annual gem exports .

Sri Lanka is known for its gem finds. Other large sapphires found in the country include the "Blue Belle of Asia," a 392-carat sapphire that sold at auction for $17.5 million in 2014.

Another was the " Star of India ," a 563-carat star sapphire on display at the American Museum of Natural History in New York. In 1964, amateur jewel thieves broke into the museum, used a glass cutter and duct tape to open the stone's display box, and made off with it .

A Sri Lankan jewelers' organization told the BBC in 2011 that the 12-carat sapphire in Kate Middleton's ring likely came from mines in Sri Lanka.

The government will take claim of it and the land owner will get nothing.

just me. I kept my mouth shut and moved out of town to another country the great USA

The fossil of a reptile discovered in Chile that called the Earth its home millions of years ago has turned out to be a paleontology first. The remains of the ancient species—a winged being whose appearance many have likened to a dragon’s—have never before seen in that part of the world, proving to be quite the exciting discovery for scientists across the globe.
WORLD・9 DAYS AGO
LiveScience

An otherworldly photograph of a solar eclipse took top prize in this year's Astronomy Photographer of the Year competition. The highly sought-after award is given by the Royal Observatory Greenwich in England. The winning photographer, Shuchang Dong of China, captured the shot during an annular solar eclipse from the Ali region of Tibet on June 21, 2020. Titled, "The Golden Ring," the photograph looks like just that - a circle of light against a dark, moody sky.
PHOTOGRAPHY・1 DAY AGO
The Week

'This is a dream find': Scientists' 'bombshell' discovery in the 'peopling' of America

"Astonishingly old" human footprints preserved in the ground across New Mexico's White Sands National Park have been determined to date back about 23,000 years to the Ice Age, a finding which, if certified, "would rejuvenate the scientific debate about how humans first spread across the Americas," The New York Times reports.
SCIENCE・20 HOURS AGO
LiveScience

Fossilized human footprints found in New Mexico reveal that people dwelled in the Americas during the last ice age's peak — a discovery that researchers suggest is conclusive proof of early migration to the New World, a new study finds. Although the newfound footprints are not the oldest evidence of...
SCIENCE・21 HOURS AGO

Unvaccinated children getting infected with Covid isn't an issue because they face such a vanishingly rare chance of falling seriously ill, expert says

Unvaccinated children getting infected with Covid isn't an issue because they face such a vanishingly rare chance of falling seriously ill, a scientist said today. England's chief medical officer, Professor Chris Whitty, yesterday told MPs 'virtually all' unjabbed youngsters would eventually catch the virus. He revealed about half of youngsters...
KIDS・23 HOURS AGO
washingtonnewsday.com

In Yemen’s ‘Well Of Hell,’ cavers discover snakes but no genies.

In Yemen’s ‘Well Of Hell,’ cavers discover snakes but no genies. A group of Omani cavers has reportedly made the first plunge to the bottom of Yemen’s mythical Well of Barhout — a natural wonder despised by many locals who believe it is a genie prison. The forbidding ‘Well of...
MIDDLE EAST・1 DAY AGO
Jordan's

Another virus has arrived which is 70% more deadly than COVID-19.

India is rushing to contain the outbreak of a virus that has claimed the life of a 12-year-old boy and is even deadlier than the COVID-19 - Nipah virus. Last week the boy was taken to the hospital in southern Kerala with a high fever and brain inflammation. After tests, he was diagnosed with the Nipah virus and died Sunday.
1 DAY AGO
Shore News Network

Scientists believe they have found physical evidence that an exploding space rock could have inspired one of the most infamous stories in the Bible, archaeologist Christopher R. Moore wrote, Yahoo News reported. Scientists may have found proof of an icy space rock hurtling through the atmosphere at about 38,000 mph...
ASTRONOMY・2 DAYS AGO

Indigenous weavers in Mexico's southern highlands are striving for rightful recognition from an international fashion industry that they say plunders their creations and tradition. The struggle has taken on added symbolism as Mexico this month celebrates the bicentenary of its independence with plaudits for indigenous peoples' resistance against Spanish colonization. Sitting on blankets on the ground in the courtyard of Julia Perez's house in the town of Zinacantan, weavers use traditional looms to produce fabric blending a multitude of bright colors. "There is a fusion of our ideas so that our tradition, our culture, our fabrics are not lost," the 39-year-old Tzotzil craftswoman said.
ADVOCACY・16 HOURS AGO
AFP

The United States is shipping another 2.5 million Covid vaccine doses to hard-hit Bangladesh, a White House official told AFP on Thursday, after the Biden administration announced a ramping up of global donations. The latest shipment -- 2,508,480 Pfizer doses -- brings the total of US shots to the country above nine million. Packing was underway and first deliveries, made through the World Health Organization's Covax program, arrive Monday, the official, speaking on condition of anonymity, told AFP. "We are proud to be able to deliver these safe and effective vaccines to the people of Bangladesh," said the official, adding that there were "no strings attached" to the donation.
U.S. POLITICS・21 HOURS AGO
USA TODAY

The ankylosaur species of dinosaur is best known for its armored spikes but, before now, remnants have only been discovered in North America.
SCIENCE・5 HOURS AGO
The Independent

An 88-year-old great-grandfather no longer faces the prospect of losing his home, after his community and a bank came together to raise $71,400 (£37,900) after he mistakenly transferred his funds to the wrong person.Gordon Layton, from Bundaberg, Queensland, Australia, had been trying to transfer the large sum of money to pay for a house that had been moved onto a block of land that he owned.By accident, Mr Layton moved the funds from his ING bank account to the wrong ANZ account on 14 June.Within hours of the transaction Mr Layton and his daughter, Jacqui Morrison-White, realised the error...
ACCIDENTS・7 HOURS AGO

Fossilized footprints discovered in New Mexico indicate that early humans were walking across North America around 23,000 years ago, researchers reported Thursday. The first footprints were found in a dry lake bed in White Sands National Park in 2009. Scientists at the U.S. Geological Survey recently analyzed seeds stuck in the footprints to determine their […]
SCIENCE・4 HOURS AGO
Insider

The teenage tennis sensation has been pictured at the Met Gala and the New York Stock Exchange as her celebrations continue.
TENNIS・2 HOURS AGO
centralrecorder.com

A NAZI death squad member whose unit reportedly killed TWO MILLION people has died at the age of 97 – without facing justice. Helmut Oberlander passed away “surrounded by loved ones” at his home in Ontario, Canada, his family said. The former Nazi died as he faced being deported back...
PUBLIC SAFETY・1 DAY AGO
Knowridge Science Report

When the universe was about 3 billion years old, just 20% of its current age, it experienced the most prolific period of star birth in its history. But when NASA’s Hubble Space Telescope and the Atacama Large Millimeter/submillimeter Array (ALMA) in northern Chile gazed toward cosmic objects in this period, they found something odd:
ASTRONOMY・1 DAY AGO
Insider

Abandoned buildings might not be glamorous destinations, but they make for hauntingly beautiful photos. Here's what they look like on the inside.
RELIGION・2 HOURS AGO
townandcountrymag.com

The Duke and Duchess of Sussex have made it to the Big Apple! The royals are in New York City this weekend to participate in Global Citizen Live, a concert aiming to promote equal access to the Covid vaccine. Though the concert isn't until Saturday, Harry and Meghan are already in New York and making some other visits. Today, the Duke and Duchess ventured to the One World Trade Center observatory and met with a few New York government officials.
NEW YORK CITY, NY・1 DAY AGO
Interesting Engineering

An Asteroid Annihilated a City 3,600 Years Ago. It Could Happen Again.

As the inhabitants of an ancient Middle Eastern city now called Tall el-Hammam went about their daily business one day about 3,600 years ago, they had no idea an unseen icy space rock was speeding toward them at about 38,000 mph (61,000 kph). Flashing through the atmosphere, the rock exploded...
ASTRONOMY・1 DAY AGO
TIME