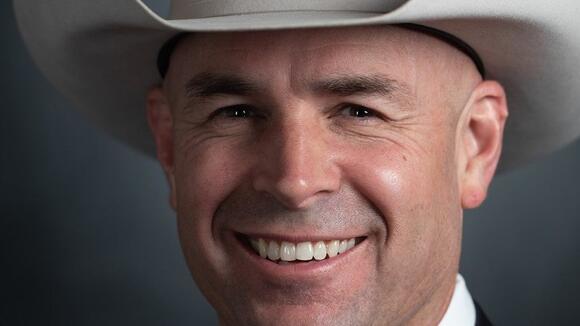 The Associated Press called the race for Ellzey, who won more than 53 percent of the vote with nearly all precincts reporting.

Ellzey and Wright were the top vote-getters in a May special election in which nobody won an outright majority of the vote, sparking the Tuesday contest.

The election was triggered after the February death of Rep. Ron Wright (R), Susan Wright’s husband.

Susan Wright ran with endorsements from Trump and his conservative allies, including the anti-tax Club for Growth. Trump also did a telerally with Wright the day before the runoff.

“Big election tomorrow in the Great State of Texas! Susan Wright supports America First policies, our Military and our Veterans, is strong on Borders, tough on Crime, Pro-Life, and will always protect our Second Amendment. She will serve the people in the 6th Congressional District of Texas, and our Country, very well. Susan has my Complete and Total Endorsement,” Trump said in a statement Monday.

Conservatives had also sought to downplay Ellzey’s Republican bona fides by highlighting a past donation he received from Bill Kristol, a prominent GOP critic of Trump.

Ellzey had the backing of former Texas Gov. Rick Perry (R) and Rep. Dan Crenshaw (R-Texas), and while he did not have as high-profile backers as Wright was able to outraise her by about $1 million.

“Jake will be a strong and effective leader for the people of North Texas and he will fight tirelessly for their values in Washington," Abbott said in a statement. "I look forward to working alongside Jake as we keep Texas the greatest state in the nation.”

"One of the things that we’ve seen from this campaign is a positive outlook — a Reagan Republican outlook for the future of our country — is what the people of the 6th District really, really want," Ellzey said.

Ellzey’s win also capped off a disappointing race for Democrats, who had hoped to be competitive in the suburban district near Dallas, only to be narrowly shut out of the runoff. It's unclear if any Democratic voters in the runoff boosted Ellzey as a way to rebuke Trump and his chosen candidate.

The win in the runoff now means Speaker Nancy Pelosi (D-Calif.) can only afford three defections in a vote to still pass legislation in the House.

This must have shot trumps ego to heck. He was so hoping to have a win he endorsed. Maybe this will open some Republican eyes that riding on the 45 coat tails - would be headed to bad territory.

Time for 6 months of recounts and audits over this "rigged" special election. Send the Cyber Ninjas there to look for Bamboo fibers shipped from China. :)

I guess Trump isn't quite the King/Queen maker he thinks he is. America is becoming great again one candidate at a time. Cruz is next. 🤣🤣🇺🇲🇺🇲

Texas Republicans proposed redrawn congressional maps Monday that would shore up their slipping dominance and bolster their nearly two dozen U.S. House members, while adding new districts in booming Austin and Houston Texas was the big winner in the 2020 Census, as torrid growth fueled by nearly 2 million new Hispanic residents made it the only state awarded two additional congressional seats, bringing its total to 38. Those demographic shifts threaten decades of Republican control in Texas, but in taking up the once-in-a-decade process of drawing new voting maps, GOP mapmakers' first draft largely appears to firewall their...
CONGRESS & COURTS・7 HOURS AGO
WashingtonExaminer

Former President George W. Bush is getting the band back together next month for a fundraiser for embattled Wyoming Rep. Liz Cheney in an effort to take the Republican Party back from former President Donald Trump.
PRESIDENTIAL ELECTION・1 DAY AGO
Newsweek

Abbott defended the state's decision to audit 2020 election results at Trump's request as Chris Wallace questioned whether it is a "terrible waste" of tax dollars.
TEXAS STATE・1 DAY AGO

Some Texas county judges expressed frustration following the announcement, saying they do not know what the audits entail.
TEXAS STATE・2 DAYS AGO
Washington Times

Former President Donald Trump will hold a rally in Georgia on Saturday night, testing his hold on the Republican Party as he shares the stage with three candidates he’s endorsed. Mr. Trump will appear with U.S. Senate candidate and former football player Herschel Walker, in addition to candidates vying for...
GEORGIA STATE・2 DAYS AGO
INFORUM

Sept 24 (Reuters) - Donald Trump lost the 2020 presidential election to Joe Biden in Arizona's most populous county, a review of results by allies of Trump in the Republican Party has reaffirmed, according to a draft report of the findings seen by Reuters on Friday. The report, prompted by...
ARIZONA STATE・3 DAYS AGO
The State

A handful of Republican candidates for Congress plan to participate in a rally Saturday at the State House in support of rioters charged in the Jan. 6 storming of the Capitol. And the group promoting the rally — Look Ahead America — says it will try and push a resolution through the state Legislature next year that aims to put pressure on Congress to help free some of the rioters involved.
COLUMBIA, SC・3 DAYS AGO

Hageman is Trump’s candidate, but he doesn’t get to vote

I guess we can all go home now. Donald Trump has endorsed Harriet Hageman, the third-place finisher in the last GOP gubernatorial primary, as his pick to beat “warmonger and disloyal Republican” Liz Cheney. The former president already declared that he wants only one candidate to run against the three-term...
CHEYENNE, WY・6 DAYS AGO
Boston Herald

The best indication that Larry Elder was going down hard in the California recall wasn’t the polling, although that all swung the wrong way in the final weeks, but his suggestion late in the campaign that Democrats were going to steal the election. Pre-emptive excuse-making isn’t a sign of great...
PRESIDENTIAL ELECTION・9 DAYS AGO
keranews.org

Donald Trump endorsed state Rep. Mark Finchem in the crowded Republican primary for secretary of state, throwing his support behind a candidate who one of Arizona’s most vocal proponents of the false allegations that the 2020 presidential election was rigged. In an endorsement statement he issued on Monday, Trump called...
PRESIDENTIAL ELECTION・14 DAYS AGO

In 2015, Trump attacked the late Senator John McCain, a former prisoner of war, by saying, "I like people who weren't captured."
PRESIDENTIAL ELECTION・1 DAY AGO
Washington Post

Former Missouri governor Eric Greitens (R), who is running for Senate, said Tuesday that if he wins next year, he will not support Senate Minority Leader Mitch McConnell (R-Ky.) as former president Donald Trump tries to oust the GOP party leader. Since announcing in March that he will run for...
PRESIDENTIAL ELECTION・6 DAYS AGO
KIFI Local News 8

PERRY, Ga. — Thousands of people decked out in Make America Great Again hats and American flags came to the Georgia National Fairgrounds in Perry Saturday to see a pro-Trump slate of candidates and the former president in his first visit to Georgia since January. The candidates include the latest...
GEORGIA STATE・1 DAY AGO

LOS ANGELES (CBSLA) – As the results in California’s recall election came in swiftly, with nearly 64% of voters rejecting the effort to oust Gov. Newsom, defeated gubernatorial candidates gave their remarks Tuesday night on the election outcome. The top Republican Candidate, Larry Elder, spoke to supporters in Costa Mesa. “My opponent, Governor Gavin Newsom,” Elder said, amid booing by the assembled crowd. “Come on, let’s be gracious in defeat, and by the way, we might have lost the battle, but we are going to win the war. At his campaign headquarters in San Diego, former two-term Republican Mayor Kevin Faulconer didn’t wait...
LOS ANGELES, CA・12 DAYS AGO
Rolling Stone

On Sunday’s Last Week Tonight, John Oliver broke down the attacks on voters’ rights through new, restrictive laws passed in over a dozen states. “I know that those pushing these bills claim that critics of them are completely distorting what is inside them and that any objections can simply be cleared up by a basic step,” Oliver says, citing calls from those defending the new voting bills to simply read them. “If you do actually read these bills, you quickly find that they absolutely make it harder to vote and particularly for certain people.” The talk show host highlights that those creating...
ELECTIONS・10 HOURS AGO
Fox News

EXCLUSIVE - A new ad blitz by the National Republican Congressional Committee (NRCC) that targets House Democrats potentially facing difficult reelections bids next year has a new villain – President Biden. "Prices are going up. Paychecks are going down," says the narrator in a digital ad by the NRCC. "Now...
PRESIDENTIAL ELECTION・12 HOURS AGO
KENS 5 Eyewitness News

SAN ANTONIO — Five candidates are fighting to fill one vacant seat in the Texas House of Representatives. A special election will be held to fill former state representative Leo Pacheco’s seat. Pacheco resigned his seat in August. The election is being held at a strange time in Texas politics.
TEXAS STATE・2 HOURS AGO