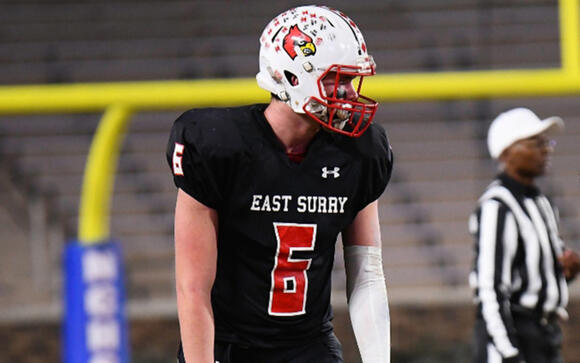 “This has been very hard,” Gosnell said in a post on Twitter. “I’m thankful for the opportunity OSU has given me and the class they have shown throughout this tough decision. But after thorough discussion with my family, I have decommitted from Ohio State and opened up my recruitment.”

The 6-foot-4 and 225-pound Gosnell, who is considered the 13th-best tight end and No. 320 prospect overall in the class of 2022, pledged his services to the Buckeyes in November over finalists Florida and North Carolina.

Gosnell has not been to campus since, though he was supposed to make a trip in June. Baseball and other obligations prevented him from doing so, and now he becomes the second player to decommit from Ohio State this cycle joining Bloomington (Ind.) South four-star athlete Dasan McCullough, who flipped to Indiana in April.

Gosnell’s decision leaves the Buckeyes with just one commitment at tight end in Acworth (Ga.) Allatoona four-star Bennett Christian, which means offensive coordinator and tight ends coach Kevin Wilson will now have to look for another player to fill his spot after spending most of the summer focused on next cycle.

The end of an Alabama football era comes Saturday

The night of Aug. 30, 2008 changed everything. From his perch in the Georgia Dome radio booth, Eli Gold sounded prophetic as the final seconds ticked down on that Saturday night of Labor Day weekend. “Welcome to 2008,” he proclaimed as Alabama’s sideline emptied onto the turf. “The world is...
ALABAMA STATE・22 DAYS AGO
The Spun

The biggest upset of the first full college football Saturday took place in stunning fashion on the West Coast. Washington, the No. 20 team in the country heading into the regular season, was shocked by Montana, 13-7, late on Saturday evening. The college football world is pretty shocked by this...
COLLEGE SPORTS・16 DAYS AGO
The Spun

An Alabama football player was reportedly arrested on Sunday morning. According to reports out of Tuscaloosa, Crimson Tide linebacker Quandarrius Robinson was arrested on DUI charges. Alabama’s Rivals.com site, BamaInsider, reported the news:. Alabama linebacker Quandarrius Robinson was involved in a car wreck in Tuscaloosa, Ala. on Sunday morning and...
TUSCALOOSA COUNTY, AL・22 DAYS AGO
Upworthy

Since three coronavirus vaccines received emergency use authorization from the FDA early in 2021, the question of how to get a high percentage of the population vaccinated has haunted public health officials. As hospitals across the country fill with severely ill COVID-19 patients, the vast majority of whom are unvaccinated, the question remains.
CHARLOTTE, NC・13 HOURS AGO

The reigning national-champion Alabama Crimson Tide continued its dominance into the 2021 season — routing No. 14 Miami 44-13 in their season opener. While it may look like there’s no team equipped to compete with the unstoppable force that is the Bama football program, ESPN college football analyst Paul Finebaum believes one team has a shot.
ALABAMA STATE・12 DAYS AGO
Outsider.com

Hello USC, this is Urban Meyer. About that job opening you have right now, how soon do you need me? Tonight is fine. Send the jet. College football fans were abuzz at the news of USC firing Clay Helton as their head football coach, Monday, two days after the Trojans lost to Stanford. And many pondered if Meyer, who has coached all of one game with the Jacksonville Jaguars, would be ready to ditch his brief NFL experiment and head west.
NFL・7 DAYS AGO
On3.com

A USC Trojans legend is calling for the job of head coach, Clay Helton. Last night, the 1995 Pac-12 Player of the Year, wide receiver Keyshawn Johnson, tweeted out his displeasure following USC’s lifeless loss to Stanford. “I’m so pissed. I can no longer Fight On for him — Period....
NFL・8 DAYS AGO
The Spun

Week 2 of the college football season is now behind us and while there weren’t many surprises, the one we had may wind up being the biggest of the season. Ohio State lost to Oregon over the weekend in a shocking upset, and that’s led ESPN’s Kirk Herbstreit to make a major adjustment to his top 4.
COLLEGE SPORTS・8 DAYS AGO

Head coach Nick Saban may not have been pleased with Alabama‘s season-opening win over Miami, but former Florida quarterback Tim Tebow sure was. Following the 44-13 win over the Hurricanes, Saban suggested his team didn’t play a full 60 minutes. Meanwhile, Tebow couldn’t stop gushing over the performance from quarterback Bryce Young.
ALABAMA STATE・9 DAYS AGO
The Spun

The two best moments from college football’s Week 2 slate came from a cat’s near-death fall at Hard Rock Stadium and a viral video from Florida State’s cheerleading squad – seriously. That’s what makes college football great, when you think about it. Sure, the games are awesome, but everything that...
COLLEGE SPORTS・8 DAYS AGO
saturdaydownsouth.com

Gary Danielson and Brad Nessler were back in the booth on Saturday for the opener of this season’s “SEC on CBS” game featuring Alabama at Florida. At issue for many fans were Danielson’s early analysis of the Florida defense after the Alabama offense scored on the opening drive. Of course, fans from both sides called out Danielson’s perceived bias, as one example came on an early pass interference call against Florida when Danielson said he didn’t think it was a good call.
ALABAMA STATE・2 DAYS AGO
On3.com

The No. 3 Ohio State Buckeyes on Saturday host the No. 12 Oregon Ducks in their 2021 home opener, a game that — on paper — appeared to be a premier game of Week 2. But perhaps the famous Ohio State University Marching Band needed another week of practice before the Buckeyes came home, as the band started off the season with a viral fail.
OHIO STATE・9 DAYS AGO

The Nebraska Huskers are putting up a fight at Oklahoma today, down 14-3 late in the third quarter. The offense hasn’t given the Husker defense much help, but they could also be much closer if not for the struggles of kicker Connor Culp. Things got off to a strong start...
NEBRASKA STATE・2 DAYS AGO
CBS Sports

After beating Clemson in a physical season opener, Georgia jumped three spots to No. 2 in the AP Top 25, taking that spot in the college football rankings for the first time since 2018. Clemson fell four spots to No. 6 after joining fellow ACC foe North Carolina as the only top 10 teams to lose in Week 1.
GEORGIA STATE・13 DAYS AGO
The Spun

Ohio State has consistently had one of the highest attendance numbers in college football. Ohio Stadium seats more than 100,000 fans, with the Buckeyes playing in front of a six-figure crowd nearly every week. This week is different, though. Ohio State is coming off a tough home loss to Oregon....
OHIO STATE・2 DAYS AGO
The Spun

On Saturday morning, ESPN’s College GameDay kicked off from Ames, Iowa ahead of a huge matchup between No. 9 Iowa State and No. 10 Iowa. While that contest will be the primary focus for the show a little later, Kirk Herbstreit and company also took a look at other games going on. During the show, the conversation eventually shifted to LSU.
AMES, IA・9 DAYS AGO
On3.com

Oklahoma Sooners athletic director Joe Castiglione has issued an apology to fans who attended Saturday’s game against Nebraska. In a Twitter post Sunday, Castiglione acknowledged the concession operations were not up to Sooner standards. “We want to acknowledge the complaints we have received about concession operations from fans attending yesterday’s...
NEBRASKA STATE・1 DAY AGO
FanSided

Kirk Herbstreit shared his thoughts on the Oregon Ducks pulling off a massive 35-28 upset victory over the Ohio State Buckeyes on Saturday. On a weekly basis, the Ohio State Buckeyes are heavily favored to walk off the field with a win. The Buckeyes held a huge advantage over the Oregon Ducks, considering that star defensive end Kayvon Thibodeaux was ruled out due to an ankle injury suffered the week prior. Yet, the Ducks shocked the world on Saturday with a 35-28 upset win over the Buckeyes.
OHIO STATE・9 DAYS AGO
The Spun

Times are tough at the Florida State football program right now. The Seminoles fell to 0-3 on the season with Saturday’s loss to Wake Forest. Florida State opened the season with a close loss to Notre Dame, appearing to show some improvement. However, Mike Norvell’s team was upset by Jacksonville State in Week 2 and then lost to the Demon Deacons in Week 3.
FLORIDA STATE・1 DAY AGO
WolverineDigest

As the world of college continues to change and evolve, Paul Finebaum appears determined to remain the same. On Friday, Finebaum continued his routine of bashing Jim Harbaugh at every opportunity. Appearing on an episode of Keyshawn, JWill and Zubin, Finebaum once again launched into tirade regarding Harbaugh's tenure at the University of Michigan.
NFL・24 DAYS AGO