'Black lives matter is not just a movement': BLM billboard set to go up in Elizabeth City 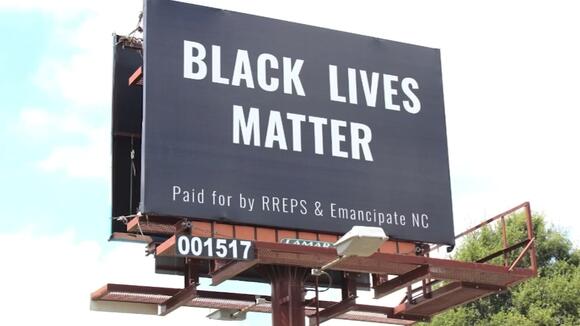 Nearly 200 miles east of the Triangle, Elizabeth City has propelled North Carolina into the national spotlight. It's marred by the familiar symbol of Black men and boys killed by law enforcement. April 21, 2021 was no different. Andrew Brown Jr., 42, was killed in front of his home as deputies said they were serving warrants. "I saw a lot of cops. It was a big blue wall of cops. They were going to stick with each other no matter what. On the flip side, I saw Black and brown individuals. We were sticking together, no matter what," said Elizabeth City resident Alana Houston. "Demonstrations are still going on as we speak." As Thursday marks 100 days since his killing , a new symbol is set to emerge over the city of almost 18,000 people, just blocks from where Brown was killed. "Black lives matter is not just a movement, it's a lifestyle," said social justice activist Kerwin Pittman . He is the executive director of RREPS and field director with Emancipate NC. Both nonprofits are behind a billboard in Elizabeth City with the words "Black Lives Matter" on it. "This billboard will be located in a special spot on a street called Ehringhaus. It's the epicenter for the town's economics. One of the main thoroughfares we shut down every day to bring awareness to Andrew Brown," said Pittman. The Black lives matter billboard is slated to go up Wednesday. Organizers say it will be in place for the next four weeks.

BLM is a Marxist racist terrorist insurrectionist organization and, by far, the most powerful violent racist hate group American history. It is thousands of time more powerful than the KKK was at its peak in the 1930s.

You tear down Historical Statues because you are Offended! Yet the placing of a Billboard promoting a Domestic Terrorist Organization that has called for the Killing of Police Officers, Rioting, Looting and The Burning Down of Entire Neighborhoods, offends No One?

blm movement started with good intentions bit unfortunately,it now fits the definition of a terrorist organization...it wants to get its point across no matter who it victimizes

A century later, Chatham County commissioner calls for apology in 1921 lynching of 16-year-old

RALEIGH (WTVD) -- A panel of judges on Friday permanently threw out North Carolina's law requiring a photo ID to vote, the latest in a decade of courtroom defeats for Republican legislators. The 2-1 decision ruled the 2018 law on Voter ID, Senate Bill 824, was unconstitutional because it unfairly...
U.S. POLITICS・1 DAY AGO
ABC11 Eyewitness News

Wake EMS is fully-staffed, but the number of ambulances is not nearly enough to handle a crush of calls during busy times of the day.
WAKE COUNTY, NC・3 DAYS AGO
ABC11 Eyewitness News

"We support vaccines," said Raleigh Fire Local 548 President Andrew Davis. "However, we don't believe that any member's career should be stunted by a personal medical choice."
RALEIGH, NC・4 DAYS AGO

Durham organization providing $500 monthly checks to the formerly incarcerated: Here's how to apply

Step Up Durham is a nonprofit taking steps to help the formerly incarcerated get back on their feet.
DURHAM, NC・4 DAYS AGO
ABC11 Eyewitness News

"When you lose the language, you lose a part of yourself and where you come from."
JOHNSTON COUNTY, NC・4 DAYS AGO
ABC11 Eyewitness News

Despite the vandalism, the business owner plans to keep the monument up as a symbol of unity, love and patriotism.
VANDALISM・6 DAYS AGO
ABC11 Eyewitness News

From Sept. 15-24 archaeologists will dig for clues into the Lost Colony mystery, and the dig will be open for public viewing.
SCIENCE・5 DAYS AGO