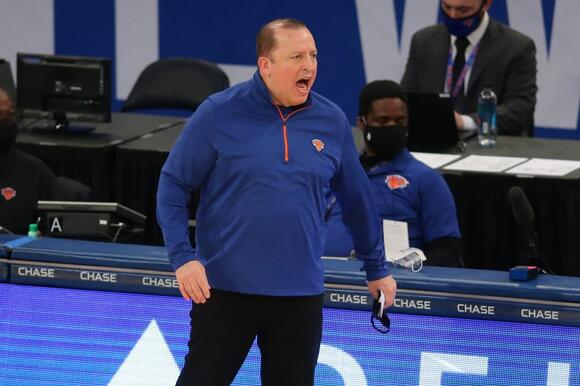 The New York Knicks are doing their best to get into the lottery with the 2021 NBA Draft quickly approaching later this week.

Coming off a surprise playoff appearance, New York has the 19th and 21st picks in the draft. Front office head Leon Rose and Co. have also reportedly made calls to multiple teams about a move up the draft board.

According to Bleacher Report’s Jonathan Wasserman, New York offered up those two picks to the Golden State Warriors to move up to the 14th selection . The report notes that Golden State promptly turned down said offer.

“A source says the Knicks have made calls to late-lottery teams about trading up. I’m told the Warriors turned down Nos. 19 and 21 for No. 14. The Knicks don’t have strong enough draft assets to get into top 10, and now it seems like a long shot they can get into the late lottery,” the report read .

That would seem to be a relatively high price to pay to move up just a few spots in the middle of the first round. It’s also clear that the New York Knicks have one target in mind. Who that might be is anyone’s best guess.

As for the Warriors, they’ve looked to do pretty much everything possible with the seventh and 14th picks in the draft outside of trading down.

“As of 2:00 today, yes,” Warriors general manager Bob Myers said earlier in the week when asked if the Warriors are actually going to use these two picks. “But here’s the problem with that answer: As of 2:45, that can change. Or 3:15. The league has never operated closer to the deadline than it does now. And things have never happened faster. Today, I got some trade stuff, that, the draft is three days away, that has never been discussed. It’s brand new.”

Clearly in win-now mode, Golden State has been linked to some of the biggest names on the trade block. It has the assets to pull off a blockbuster trade, including these two first-round picks and young center James Wiseman. 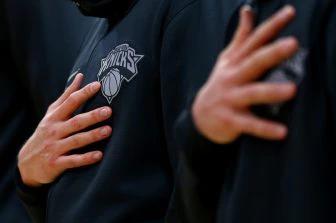 It remains to be seen if acquiring another first-round pick would help facilitate a trade for someone like Washington Wizards star guard Bradley Beal. A lot of that could depend on how the board plays out Thursday evening in Brooklyn.

Former Virginia wing Trey Murphy III seems to be a target of the Knicks if they are unable to move into the lottery. The 6-foot-9 guard has been ascending the draft boards big time recently after shooting a resounding 43% from three-point range last season.

The hiccup here is that Golden State has brought him in for multiple workouts — complicating things when it comes to the aforementioned trade proposal.

Much like Golden State, it appears that the New York Knicks want to use the 2021 NBA Draft as a means to an end. That includes finding a way to acquire veterans to help New York improve even more after a surprise playoff appearance in 2020-21.

As it is, New York is one of the teams to pay close attention to with the draft approaching in the matter of days.

Bookmark. Save. Do your thing. We will be providing constant updates on this page as it relates to the biggest
NBA・2 DAYS AGO
firstsportz.com

DeMarcus Cousins seems to the latest veteran to join the LA Lakers ahead of the 2021-22 season. Having not found a permanent home for the past few seasons in the NBA for the 31-years-old. However, after the likes of Russell Westbrook, Carmelo Anthony, Dwight Howard among many others, Cousins seems to be latest addition to the yellow and purple army as they look to avenge their heart-breaking loss in the previous season.
NBA・5 DAYS AGO
fadeawayworld.net

NBA Rumors: Warriors And Pelicans Could Enact A Trade That Would Send Brandon Ingram To Golden State

The Golden State Warriors are a team that will have championship aspirations next season. That just comes with the territory of having Stephen Curry at the peak of his powers on your team, and Klay Thompson finally returning from injury. The Warriors have a lot of younger players on the...
NBA・18 DAYS AGO
NBA Analysis Network

From crying about drafting a future NBA All-Star to chanting that Trae Young is balding in a home playoff game, New York Knicks fans have come a long way over several years!. The Knicks made their first playoff appearance since 2013 last season, and while they did lose to Young and the Hawks, who went on to reach the Eastern Conference Finals, the Knicks learned a lot about themselves.
NBA・14 DAYS AGO

In the season-plus he has been a member of the Golden State Warriors, Andrew Wiggins has turned that bust narrative
NBA・3 DAYS AGO
chatsports.com

NEW YORK, NY - MARCH 20: Jeremy Lin #17 of the New York Knicks steals the ball in the second half against Andrea Bargnani #7 of the Toronto Raptors (Photo by Chris Chambers/Getty Images) The Toronto Raptors didn’t have a ton of postseason success in the pre-Masai Ujiri era, and...
NBA・13 DAYS AGO
NBA Analysis Network

The 2014-15 season, 2016-17 season, and 2017-18 season resulted in the Golden State Warriors being World Champions, but while they made the NBA Finals for five consecutive years, this team has now missed the playoffs for two straight seasons, the first time they have done so since they missed the playoffs for back-to-back years in 2011 and 2012.
NBA・11 DAYS AGO
Sportsnaut

NBA power rankings: The Milwaukee Bucks will look to defending their NBA championship once the season gets going in mid-October.
NBA・12 DAYS AGO

The Dallas Mavericks have signed free agent former Knicks Point Guard Frank Ntilikina on Thursday. The New York Knicks had previously declined to extend the PG a qualifying offer. This is not the first we are hearing of this news as NBA Insider Marc Stein tweeted out on Tuesday that Dallas was the most likely landing place for the guard. Frank Ntilikina averaged 5.5 points and 2.7 assists while he was with the Knicks.
DALLAS, TX・8 DAYS AGO
Yardbarker

Massey notes that the Pacers getting the NBA Disabled Player Exception is what has to happen first before adding a new player to replace Edmond Sumner who tore his left Achilles. Scott Agness of Fieldhouse Flies reported on Friday that the Pacers have applied for the Exception (see Tweet below).
NBA・7 DAYS AGO
FanSided

The New York Knicks enter the upcoming NBA season in unfamiliar territory. After spending the better part of the past decade at the cellar of the league standings, the franchise is projected to finish well above .500. They are also in a position to build off of last season’s success as they seek their first postseason series win since the 2012-2013 campaign.
NBA・6 DAYS AGO
USA TODAY Sports Media Group

The Golden State Warriors signed free agent guard Avery Bradley to a deal, according to Shams Charania of The Athletic. They also added guard Langston Galloway on a training camp deal, according to Charania. Bradley played 27 games with the Miami Heat and Houston Rockets last season, averaging 6.4 points,...
NBA・2 DAYS AGO

Will the New York Knicks regret not signing DeMar DeRozan?. From all accounts, the offseason has been a success for the New York Knicks. They improved the roster while maintaining some level of financial flexibility heading into the future. Overall, the Knicks should be a better team this season. However,...
NBA・14 DAYS AGO
FanSided

The Golden State Warriors had an underwhelming free agency period in terms of finding playmaking to help Stephen Curry while Klay Thompson remains sidelined. They did add a plethora of talented veterans, but if that’s enough will be a question only answered with time. For now, the Warriors will be rocking with five new additions, three veteran forwards and two rookies.
NBA・14 DAYS AGO

3 obvious needs the Golden State Warriors must still figure out

The Golden State Warriors made a handful of decent moves this offseason, but they really didn’t have anything that was outright over the top or risky. Jonathan Kuminga is a risk, but he was clearly the best option at No. 7. The biggest risk the Warriors have to navigate now...
NBA・12 DAYS AGO
hoopsrumors.com

The 2022 NBA draft is still over nine months away, but a number of teams have already traded away their first-round picks for ’22, and more clubs may do so before this season’s trade deadline. We’ll use the space below to keep tabs on each team’s first round pick for...
NBA・13 DAYS AGO
FanSided

A popular conversation constantly revolving around not just the New York Knicks but the whole NBA is how some of basketball’s all-time greats would fair in different eras. Part of what makes the topic so interesting and fun to speculate about is the fact that every era of the game is so incredibly different. The NBA today is nothing like it was during its inception in the mid-1940s. Heck, it is very different now from what it was like even 10 years ago.
NBA・9 DAYS AGO