Moeller baseball plans to play in Kremchek Stadium in 2022 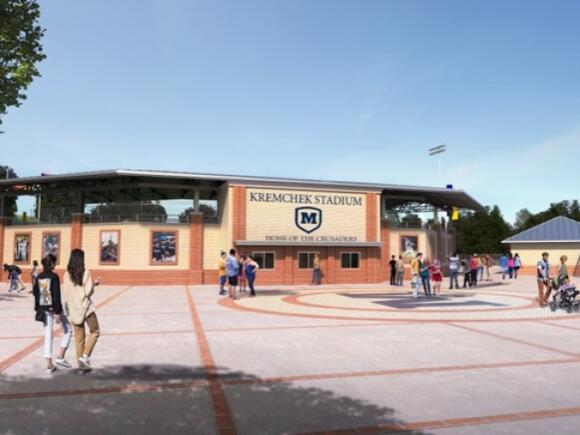 There are 30 acres of land located on Second Street in Miamiville which were donated by Barry Bucher to Moeller's athletic programs.

The Moeller varsity baseball team is planning to play in the baseball stadium, previously announced as Kremchek Stadium, in the spring of 2022. The Crusaders are scheduled to open the season including the home schedule against visiting Strongsville on Saturday, March 26.

Moeller coach Tim Held said he's been preparing for the team to utilize the new stadium in the spring.

"So excited for this for the players and coaches and just what we think we will be able to accomplish being able to practice on a field," Held told WCPO.

"We've never been able to do that regularly."

Dr. Timothy Kremchek made a significant donation to Moeller, the school said in April.

The donation from Dr. Kremchek is part of the largest fundraising campaign in school history, the $14 million "Raise the Shield" campaign that will increase the endowment, expand the academic footprint of the campus and continue the deep athletics tradition.

“We are excited to play games, practice, and make this a remarkable athletic complex for our students,” Moeller president Marshall Hyzdu said in a statement.

"As an alumnus, I am particularly proud of this moment to literally put Moeller athletics on the map.”

The football season is back on at Western Hills and Dater High School, where practice and games were suspended after video of an alleged hazing incident circulated online, but former head coach Armand Tatum won’t be on the sidelines.
CINCINNATI, OH・1 DAY AGO
WCPO 9 Cincinnati

Lakota West defeated visiting Princeton 24-0 Friday night in a Greater Miami Conference showdown. It was the Firebirds' first shutout over the Vikings since 2009.
HIGH SCHOOL・7 DAYS AGO