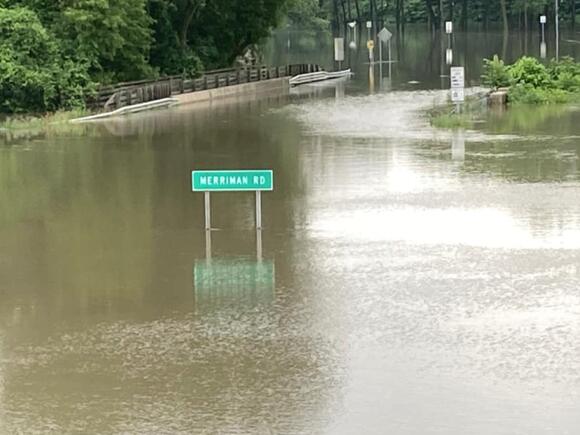 A class-action lawsuit has been brought against DTE Energy, the company that services the metro Detroit area, in connection to the June mass flooding.

The lawsuit, which is being represented by Liddle & Dubin P.C. law firm, alleges that DTE "failed to take reasonable steps to repair and maintain the power instrumentalities at the Ludden substation that provided electricity to the critical Freud Pumping Station in Detroit."

The law firm states that more than 2,500 residents from seven metro Detroit cities have expressed interest in the lawsuit.

“These flooding events should not have happened. We know from experience that it is crucial to investigate these cases before filing to ensure that we know what happened and who is responsible. We have devoted a considerable amount of time and resources to determining what caused the catastrophic flooding of thousands
of homes and who is responsible,” said David Dubin, an attorney with Liddle & Dubin P.C. “This case, and the others that will be filed in the coming weeks, will encompass all of the necessary parties whose conduct we believe contributed to this widespread basement flooding, and hopefully get the people the relief they deserve.”

Dubin adds that this is just the first of many more lawsuits to come against "several other entities" that allegedly played a part in the damage of several homes due to flooding.

DTE spokesperson Jill Wilmot said in a statement to 7 Action News that, "DTE does not comment on litigation."

Tens of thousands remain without power in metro Detroit: 'I'm really tired of it'

Tens of thousands of people remain without power in metro Detroit after the latest round of rain and high winds earlier this week.
DETROIT, MI・1 DAY AGO
WXYZ Detroit - 7 Action News

September has been the rainiest month of the year in metro Detroit; last 4 months above average

Rain in metro Detroit has been above-average for the entire summer.
DETROIT, MI・1 DAY AGO
WXYZ Detroit - 7 Action News

Charging while driving? What does our electric vehicle future look like?

As the number of electric vehicles on the road continues to grow, the U.S. is still behind other countries in sales and in the number of public charging facilities.
DETROIT, MI・1 DAY AGO
WXYZ Detroit - 7 Action News

Michigan drivers were overcharged more than $1 billion in auto premiums in 2020, according to a study by a national consumer advocacy group.
MICHIGAN STATE・2 DAYS AGO

Dozens of schools closed in metro Detroit Thursday, many due to power outages

Dozens of schools across metro Detroit are closed on Thursday, many due to power outages after high winds on Wednesday evening.
ECONOMY・2 DAYS AGO
WXYZ Detroit - 7 Action News

Dr. Joneigh Khaldun stepping down as chief medical executive for State of Michigan

Dr. Joneigh Khaldun, the chief medical executive at the Michigan Department of Health and Human Services, is leaving her role for a job outside of state government, Gov. Gretchen Whitmer announced on Friday.
MICHIGAN STATE・1 DAY AGO

Conviction erased in fire that killed 5 kids in Michigan

A judge on Tuesday erased the murder conviction of a man who was blamed for a fire that killed five children in 2000 after a new prosecutor said the investigation and trial were marred by misconduct years ago in suburban Detroit.
MICHIGAN STATE・3 DAYS AGO
WXYZ Detroit - 7 Action News

When Diana Alaniz and her husband left Texas with their three children and headed to Michigan, the couple figured they'd continue to rent.
DETROIT, MI・2 DAYS AGO
WXYZ Detroit - 7 Action News

DTE: 89,000 people without power because of storm

DTE says the rain and wind moving through metro Detroit since Tuesday left around 121,000 people in the dark as of 9:30 p.m. Wednesday.
ENVIRONMENT・3 DAYS AGO
WXYZ Detroit - 7 Action News

The public health officer in the Grand Rapids area said he's a victim of “brute mob hatred” after ordering masks in schools in Kent County to prevent the spread of COVID-19.
MICHIGAN STATE・3 DAYS AGO

Zone 1 in Flat Rock cleared, most residents who evacuated can return home

Notices from the Wayne County Health Department and the Michigan Department of Health and Human Services say there is no longer a risk for the evacuation area ...
FLAT ROCK, MI・2 DAYS AGO
WXYZ Detroit - 7 Action News

We are celebrating Hispanic Heritage Month by sharing the stories of incredible people working to better their communities.
DETROIT, MI・3 DAYS AGO
WXYZ Detroit - 7 Action News

(WXYZ) — Detroit firefighters were at the scene of an apartment building fire at the west tower of Lafayette Towers in Detroit around 7:45 a.m. this morning. A fire reportedly started on the ninth floor of the building, which is located at 1301 Orleans. Residents were evacuated from the building....
DETROIT, MI・3 DAYS AGO
WXYZ Detroit - 7 Action News

New vehicle reveals and the future of EVs at Motor Bella

The world got the first look at the new 2022 Ford Expedition SUVs and the 2022 Toyota Tundra at Motor Bella. Michigan Governor Gretchen Whitmer also announced an ambitious program to develop wireless EV charging technology while those vehicles are driving on the road.
DETROIT, MI・4 DAYS AGO