Fact check: Man photographed with Donald Trump in 2016 was born without arms

The claim: A photo shows Donald Trump embracing a man who lost both of his arms

A viral story on social media is spreading an inaccurate account about then-candidate Donald Trump's 2016 interaction with a disabled man.

“This Patriot lost both arms,” reads text under an image in a July 21 Facebook post. “The feeling of a handshake is now lost to him. President Trump realized this, and so (he) touched his face, so he can feel the human connection.”

But the man in the image didn't lose his arms. He was born without them.

The Trump campaign fueled confusion about whether the man, identified as Henry “Bubba” Stevenson Jr. , had lost his arms while serving in the military when it included the image in a 2016 campaign video about veterans .

The same image circulated with a similar story, and the added detail that the man was a veteran, in the months leading up to the 2020 election

In September 2020, radio and TV personality Mark Simone claimed in a tweet the image shows a veteran. Trump later retweeted it.

Fact-checkers debunked the claim in September 2019 and September 2020 . There is no evidence Stevenson is a veteran.

Fact check: False claim persists online that Trump will be reinstated as president in August 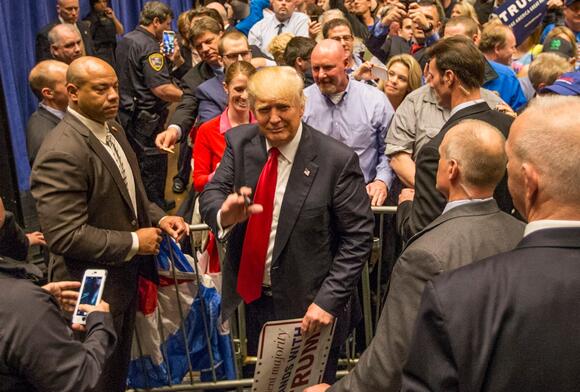 Man was born without arms

The photo shows Stevenson meeting Trump at Winthrop University in Rock Hill, South Carolina, on Jan. 8, 2016. The News & Reporter, a local paper, published an article and photos of the exchange.

“Stevenson was born without arms. On his right side, his arm stops shy of his elbow and on his left side, there is only a nub below his shoulder,” the newspaper reported.

According to the report, Trump signed Stevenson’s left prosthetic arm, a sign and a hat. Stevenson said Trump approached him after his speech and asked how he had lost his arms. He replied that he was born without them.

A bystander caught the interaction on video and posted it to YouTube .

In an article by WLTX, a CBS affiliate TV station in South Carolina, Stevenson’s mother is quoted describing how he coped with his disability as a child.

Fact check: Claim about unvaccinated being sent to quarantine camps started as satire

The News & Reporter reported that Stevenson got his first bionic arm in September 2014. His GoFundMe campaign for a second arm is still posted.

None of the articles mention that Stevenson served in the military. USA TODAY could find no other evidence that he's a veteran.

This article originally appeared on USA TODAY: Fact check: Man photographed with Donald Trump in 2016 was born without arms

sorry you don't touch someone else's face because they don't have arms, this is desrespectful, but that's not uncommon for Donald Jennifer Flower

And trump was born without a brain. Only a brain stem which allows him to do everything but think and feel.

I didn’t get past, “Trump touched him in the face to feel the human connection… “. I spit my beer out. Truly the most ridiculous statement said. 😂.

Hageman was previously close to Cheney and worked on the Republican's 2016 House race and 2014 Senate bid.
POTUS・7 DAYS AGO
USA TODAY

Experts say that putting up one of a president’s good months against a fluctuating 4-year term isn’t a fair comparison.
POTUS・9 DAYS AGO
Fox News

Newsmax host Grant Stinchfield cut off an Iraq War veteran on his show Wednesday after he criticized former President Donald Trump for his handling of Afghanistan.
POTUS・12 HOURS AGO
Newsweek

A billboard hailing former President Donald Trump as the second coming of Jesus Christ has been taken down. The advertisement was spotted near the city of Fort Oglethorpe in Georgia earlier this week by Washington Post political reporter Eugene Scott who posted a picture of it to Twitter. It featured...
POTUS・1 DAY AGO
Daily Fort Worth

Some people simply can’t control themselves and are risking decades in prison for their reckless actions and this man is just that kind of person because he is about to spend major part of his life in prison after he shot to death one person and injured another because they were Joe Biden supporters.
U.S. POLITICS・2 DAYS AGO
MSNBC

Lawrence O’Donnell explains Donald Trump’s history of lying about 9/11 and why Donald Trump is afraid to repeat his worst lie.Sept. 15, 2021.
POTUS・2 DAYS AGO

President Biden visited California Monday to rally support for California Governor Gavin Newsom, who is facing a recall election. Should Californians vote to recall him, the result will be Republican candidate Larry Elder in the governor’s seat. Biden and his Vice President Harris appeared at Newsom’s rally to speak to Californians.
PRESIDENTIAL ELECTION・2 DAYS AGO
laconiadailysun.com

Zeleny: Poll not all that great for Donald Trump

A new CNN poll found that while President Donald Trump is still seen as the leader of the Republican Party, less GOP members think their party's chances are better with Trump when compared to March 2019.
PRESIDENTIAL ELECTION・4 DAYS AGO
Douglas Budget

The countdown to when, not if, former President Donald Trump announces another run for president is on as close confidants reveal an attempt to return to the White House is nearly a reality. In the latest episode of The Point, CNN's Chris Cillizza examines all of the not-so-subtle hints Trump is dropping and where his chances of winning the GOP nomination stand.
PRESIDENTIAL ELECTION・7 DAYS AGO

Donald Trump Jr. has said the Taliban respected his father's "strength" and the former president had the "brainpower" necessary to negotiate with the group that now controls most of Afghanistan. Former President Donald Trump's eldest son told Fox News' Sean Hannity on Wednesday that his father "exuded strength" and said...
POTUS・8 DAYS AGO
Newsweek

If they were to go head-to-head in 2024, the former president is slightly favored with 47 percent against Biden's 46.
PRESIDENTIAL ELECTION・11 DAYS AGO
WashingtonExaminer

Tired of the never-ending election cycle? Well, too bad. The Nov. 3, 2020 election was held just 10 months ago today, but 2024 has been a hot topic since sometime early on Nov. 4, 2020. Add to that South Carolina’s status as an early primary state and home to would-be...
PRESIDENTIAL ELECTION・13 DAYS AGO
Primetimer

Trump announced his presidential candidacy on June 16, 2015, giving Stewart's Daily Show about six weeks to cover it before his signing off on Aug. 6, 2015. Back then, Stewart called Trump's candidacy "a gift from heaven." “Thank you Donald, thank you Donald Trump, for making my last six weeks my best six weeks,” he said. “He is putting me in some kind of comedy hospice where all I’m getting is just straight morphine.” Stewart went on to call Trump’s announcement speech “the most beautifully ridiculous jibber-jabber ever to pour from the mouth of a batshit billionaire,” also cracking that “America’s id is running for president!” In a new interview with The Hollywood Reporter, Stewart admitted his treatment of Trump was, in retrospect, wrong. “What I missed there is that his certainty, his ridiculousness, his shamelessness is what made him dangerous,” he said. “I thought it made him a buffoon, and I thought that’s what would disqualify him. What it did is made him the perfect vessel.”
PRESIDENTIAL ELECTION・16 HOURS AGO
KIFI Local News 8

(Reuters) - Former U.S. President Donald Trump might make another White House run in 2024, but if he does, he will take his place in American history as a two-time loser, House of Representatives Speaker Nancy Pelosi predicted on Thursday. Visiting England for a meeting of parliamentary leaders from G7...
PRESIDENTIAL ELECTION・17 HOURS AGO
Newsweek

Previously, the senator reportedly told Trump he had been "written off as dead" because of the U.S. Capitol riot.
POTUS・13 HOURS AGO