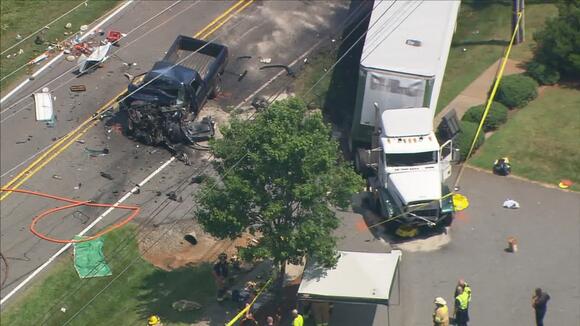 CONOVER, N.C. — A man was killed in a head-on crash involving a tractor-trailer Tuesday afternoon in Catawba County.

The collision happened around 12 p.m. on Highway 70 between Conover and Claremont.

Police told Channel 9 that a pickup truck crossed the centerline and collided with a tractor-trailer head-on. The tractor-trailer driver tried to avoid the truck, but only had seconds to react, according to investigators.

The driver of the pickup truck, 59-year old Virgil Burton, did not survive.

Highway 70 was closed for hours as authorities investigated.

MORGANTON, N.C. — A woman was arrested Wednesday for the murder of another woman in Burke County, authorities said. Deputies responded to a home on Gold Mine Road in Morganton at around 11 p.m. Friday. They found Cara Fantasia Lane, who lives at the home, fatally shot. [ ALSO READ:...
BURKE COUNTY, NC・3 HOURS AGO
WSOC Charlotte

Girl trying to get to school bus injured in hit-and-run, police say

FORT PIERCE, Fla. — A girl was injured Thursday morning after being struck by a hit-and-run driver while trying to get to a school bus, according to multiple reports. Fort Pierce police said the incident happened around 6:10 a.m. near the intersection of Skylark Drive and Oleander Avenue. Police spokesperson...
FORT PIERCE, FL・4 HOURS AGO
WSOC Charlotte

CHARLOTTE, N.C. — A 19-year-old has been charged with fatally shooting a man in east Charlotte back in February. Officers responded to the scene at around 8 p.m. on Feb. 19 on Waterford Ridge Drive near East W.T. Harris Boulevard. [ ALSO READ: Family grieving after 23-year-old shot to death...
CHARLOTTE, NC・48 MINUTES AGO
WSOC Charlotte

WASHINGTON — A dispute between a 9-year-old boy and a 9-year-old girl led Tuesday to a shooting that left one of the children and an adult man injured in Washington, according to the Metropolitan Police Department. Officers responded to the 1500 block of Morris Road SE around 4:45 p.m. after...
WASHINGTON, DC・2 HOURS AGO

WASHINGTON — A special officer with the Metropolitan Police Department in Washington, D.C., was on duty when she was shot and killed in an apartment complex earlier this week, authorities said. According to WJLA and WUSA, the incident occurred shortly after 8:30 p.m. Tuesday on 10th Place Southeast. Police arrived...
WASHINGTON, DC・7 HOURS AGO
WSOC Charlotte

RIDGE MANOR, Fla. — An act of kindness went awry for a Florida woman and her daughter on Tuesday. The women, who were helping two men who had crashed on an interstate highway, were instead carjacked and forced to drive the men more than 40 minutes south to Tampa, the Florida Highway Patrol said in a news release.
FLORIDA STATE・13 HOURS AGO
WSOC Charlotte

Police believe a toddler may have fatally shot himself after finding and accidentally firing a family member’s gun in a Texas apartment, authorities said. According to KCEN and KWKT, the incident occurred shortly after 6 p.m. Wednesday at a home in the University Club Apartments in Waco. Waco police arrived to find a 2-year-old boy who had been shot in the head and rushed him to a nearby hospital, where he was later pronounced dead, the news outlets reported.
TEXAS STATE・8 HOURS AGO
WSOC Charlotte

LOUISVILLE, Ky. — One teen was killed and two others were injured Wednesday in a drive-by shooting at a bus stop in Louisville, authorities said. Tyree Smith, 16, was pronounced dead at an area hospital, the Courier-Journal reported. A 13-year-old boy was wounded and taken to an area hospital with non-life-threatening injuries, and a 14-year-old girl was grazed on the ankle and declined medical treatment, the newspaper reported.
LOUISVILLE, KY・13 HOURS AGO
WSOC Charlotte

OLD TOWN, Maine — A police officer in Maine got an unusual call Monday after a deer fell into a swimming pool in Old Town, according to police. Video posted on Facebook and shared by police showed the officer, identified as Catie Denning, pulling the deer to the edge of the pool before getting the flailing animal out of the water.
MAINE STATE・1 HOUR AGO
WSOC Charlotte