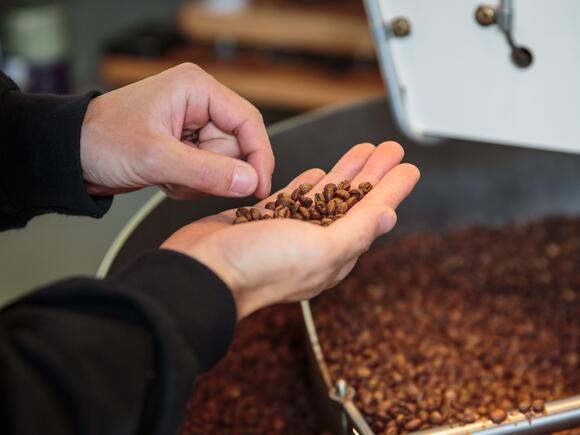 Extreme frost in Brazil's coffee-growing region is set to harm next year's crop, sending prices of coffee to a six-year high.

Futures for arabica beans jumped to $2.08 a pound Tuesday, the highest level in New York since 2014, according to the Wall Street Journal.

Exacerbating the price surge is the fact that the frost is the second major weather shock to hit farms in Brazil, the world's largest coffee producer. This spring, the region's rainy season hardly saw any rain during one of its worst droughts in almost a century. The drought hurt the 2021 crop and dropped the coffee supply output in Brazil as plants withered.

Now, traders are spooked that the frost will harm the 2022 coffee harvest, and have pushed coffee futures up 30% in July.

José Marcos Magalhães, president of the Minasul coffee cooperative and also a grower, told the Journal that he expects to lose two-thirds of the 2022 harvest on his farm.

The frost is the latest weather shock to spoke commodity traders into bidding up prices. Last week, lumber futures spiked as concerns grew that wildfires in Canada and the Western US will harm supply chain routes .

Coffee prices could stay "relatively high" through 2022 due to constrained supply from major producers Brazil, Vietnam and Colombia, said Fitch Solutions. Brazil waves of frost and drought that damaged many of its crops, while restrictions to fight Covid-19 in Vietnam caused coffee exports to fall. Vietnam, the world's second-largest...
PUBLIC HEALTH・1 DAY AGO
Herald Tribune

U.S. natural gas futures have soared to a seven-year high, almost doubling since the beginning of the year. Gas for October delivery recently reached $5.03 per million British thermal units, a level not reached since 2014. The former high price level occurred during the polar vortex (North American cold wave). Because the amount of gas currently held in storage is low in both Europe and America, some analysts anticipate further price increases, resulting in much larger winter heating bills.
SARASOTA, FL・3 DAYS AGO
Reuters

(Reuters) -Teck Resources Ltd, is exploring options for its metallurgical coal business, including a sale or spinoff that could value the unit at as much as $8 billion, Bloomberg News reported on Tuesday, citing sources. Large commodity producers have been facing investor pressure to shift away from fossil fuel business,...
INDUSTRY・2 DAYS AGO
marketresearchtelecast.com

LONDON, Sept 14 (Reuters) – China’s accelerating cuts in aluminum production will create a major shortage of the input this year, as concerns over supply chain disruptions in Guinea have helped fuel prices at 13-year highs. A Reuters poll of six analysts put the forecast for the deficit at 1.2...
INDUSTRY・2 DAYS AGO

If it’s not one thing, it’s another for Brazilian coffee producers. If it’s not heat then it’s unexpected frost or wholesale crop changes to more resilient species thanks to climate change. Coffee growers from the world’s largest producing country are beset by challenges at seemingly every turn, and now there’s a new one: there aren’t enough shipping containers to export their crops.
AGRICULTURE・2 DAYS AGO
Reuters

BRASILIA (Reuters) - Deforestation in Brazil’s Amazon rainforest fell for the second consecutive month in August, compared to a year ago, according to preliminary government data published on Friday, with year-to-date figures for 2021 also showing a slight decline. Forest clearances in August totaled 918 square kilometers (354 square miles),...
AMERICAS・6 DAYS AGO
PRX

It’s a typical weekday afternoon at Red Emma’s coffee shop in Baltimore, Maryland. A handful of people sit chatting over wooden tables in the large open dining area. Behind the counter, barista Najee Haynes-Follins makes an iced Americano at the machine. She’s a member of the worker’s co-op that owns and runs the coffee shop, restaurant and bookstore.
AGRICULTURE・6 DAYS AGO
Reuters

TOKYO, Sept 10 (Reuters) - Japan's exports likely surged for the sixth straight month in August thanks to strong global demand for machinery goods and a flattering comparison with last year's pandemic-induced slump, a Reuters poll showed on Friday. Japan's wholesale prices were expected to stay at more than 10-year...
BUSINESS・7 DAYS AGO

Why spot uranium prices have climbed to a 6-year high

Over 10 years ago, a disaster in Japan cast a shadow on the future for nuclear energy and the uranium used to fuel it, but efforts across the globe to reduce carbon emissions have revived interest in the power source.
INDUSTRY・7 DAYS AGO
Business Insider

Coffee drinkers may be in for a rude awakening as production costs have hit a seven-year-high. Bad weather has hit supplies from Brazil, the world’s largest producer, protests in Columbia have disrupted shipments, and a shortage of shipping containers in South East Asia is also causing delays. Experts predict that...
FOOD & DRINKS・9 DAYS AGO
Agriculture Online

London (CNN Business) — Aluminum prices have reached their highest level in more than a decade following a coup in Guinea, a major supplier of the main ore used to produce the metal. The price of aluminum futures on the London Metal Exchange rose as much as 1.8% to $2,775.50...
BUSINESS・10 DAYS AGO
The Independent

Brazil's worst drought in over 90 years is drying up reservoirs and threatening energy supply across the country. Two-thirds of the nation relies on hydropower plants for electricity, with the government warning that rationing could come next. "The problem is serious, I appeal to you at home. I'm sure you...
ENERGY INDUSTRY・11 DAYS AGO
The Poultry Site

Reuters reports that the latest assessment is a sharp reversal from a February forecast for a decline in profits. A surge to eight-year highs in US corn and soybean prices this spring has brightened the financial outlook for farmers even as aid payments from the federal government are declining. Crop prices have pulled back from peaks reached in May but remain historically high due to tight global supplies and robust imports from China.
AGRICULTURE・11 DAYS AGO
KHQ Right Now

MISSOULA, Mont. - Local coffee shops are not only facing a worker shortage, but now are faced with supply order delays and a potential surge in coffee ground stock. That's according to market's insider who says extreme frost in Brazil's coffee-growing region could affect next year’s crop, potentially sending price for coffee grounds to a near 30 percent increase for coffee materials for both local and corporate chains like Liquid Planet stores here in Montana.
RESTAURANTS・12 DAYS AGO
mining.com

US home prices are surging, increasingly raising worries about inflation. Could gold follow houses? If so, why?. Home price growth in the US has accelerated even further, reaching a new record. The S&P/Case-Shiller U.S. National Home Price Index rose from 255.3 in May to 260.9 in June, boosting the annual percentage gain from 16.8% to 18.1%, as the chart below shows. That’s the largest jump since 1988 when the series began.
BUSINESS・14 DAYS AGO
dailycoffeenews.com

With Ties to Brazil, Coffee DRs Offers a Coffee Cure in Sydney

In the north Sydney suburb of Hornsby in Australia, a coffee couple with deep ties to Brazil and a family-driven passion for healing physical and social ills has been taking in guests under the name Coffee DRs. Luke and Julia Bantatua opened the coffee shop serving fresh-roasted beans of their...
RESTAURANTS・9 DAYS AGO
marketresearchtelecast.com

The electricity sector has shown its rejection of the measures announced this Tuesday by the Government of Spain to reduce the electricity bill, after months of rising prices, which have broken the all-time high on numerous occasions. The reaction to the announcement that cut 2.6 billion euros from companies of...
ENERGY INDUSTRY・1 DAY AGO