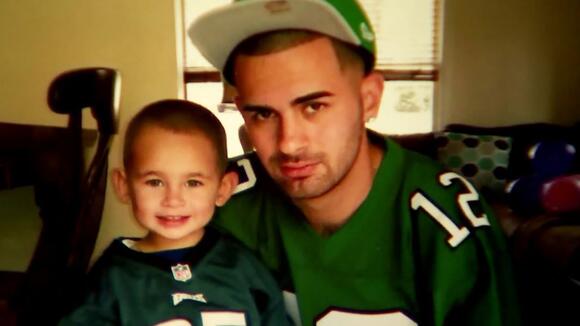 CATAWBA COUNTY, N.C. — Family members -- as well as investigators -- are growing more concerned about foul play in the disappearance of a Catawba County father earlier this month.

Reporter Dave Faherty spoke with the parents of Tony Jaworsky on Tuesday, who said they are very worried. Deputies said they are calling Jaworsky’s disappearance suspicious.

The 29-year-old’s parents said they last saw their son on July 13. They told Channel 9 he is very close with his children and would never miss one of their birthdays, something that has since happened.

Tony Jaworsky’s car was found abandoned along Interstate 40 in Iredell County -- about 20 miles from his home -- days after his disappearance.

Channel 9 was with investigators Tuesday morning. They have the vehicle in a garage at the sheriff’s office where they have carefully gone over it for any possible clues in the case.

Tony Jaworsky’s parents told Channel 9 they just want some answers and said it’s difficult to sleep with their son missing.

“I’m scared,” his mother, Kelly Jaworsky, said. “I’m real scared. I’m thinking all these different thoughts like something bad happened to him, and he’s not here, or somebody has him.”

“You see it on TV, on the news, constantly, and you don’t know what it’s like until it happens to you -- and it’s unbearable,” his father, Daniel Jaworsky, said.

Detectives are interviewing those who knew Tony Jaworsky, and deputies in both Iredell and Burke counties are helping, as is the State Bureau of Investigations.

“Please bring my son home, because I love him, and he’s got three beautiful kids that he loves and mean the world to him,” Kelly Jaworsky said.

My heart goes out to his parent's because I cannot begin to imagine what his parents are going through and all the different scenarios that are going through their minds every second of every day!!! If either of my kids were missing for even a day I would go crazy much less them being gone for weeks!!! Many prayers that he is found safe but if something bad has happened to him I hope that his parent's will get answers and find some sort of closure!!!

MORGANTON, N.C. — A woman was arrested Wednesday for the murder of another woman in Burke County, authorities said. Deputies responded to a home on Gold Mine Road in Morganton at around 11 p.m. Friday. They found Cara Fantasia Lane, who lives at the home, fatally shot. [ ALSO READ:...
BURKE COUNTY, NC・8 HOURS AGO
WSOC Charlotte

‘In a nightmare’: Family searches for answers in mysterious disappearance of Pageland mother

PAGELAND, S.C. — Deidre Reid, of Pageland, has been missing since Sept. 3, and family members are searching for answers into where she could be. Authorities have not named a suspect or person of interest in the case. “Their lives (are never going to be) the same,” her brother, James...
PAGELAND, SC・41 MINUTES AGO
WSOC Charlotte

CHARLOTTE, N.C. — A woman was shot by police after she tried to run over an officer with her vehicle in south Charlotte Thursday afternoon, according to Charlotte-Mecklenburg police. Authorities responded to the scene on Tyvola Road near South Boulevard. [ ALSO READ: 1 killed, 12 injured in shooting at...
CHARLOTTE, NC・2 HOURS AGO
WSOC Charlotte

FORT PIERCE, Fla. — A 10-year-old girl has died after being struck Thursday morning by a hit-and-run driver while she was trying to get to a school bus, Fort Pierce police said. Update 3:35 p.m. EDT Sept. 23: The girl, identified as Yaceny Berenice Rodriguez-Gonzalez, died after police found her...
FORT PIERCE, FL・9 HOURS AGO

7 vehicles including tractor-trailer involved in crash on I-485 in Huntersville, officials say

HUNTERSVILLE, N.C. — Authorities are responding to a crash involving seven vehicles, including a tractor-trailer, on Interstate 485 in Huntersville. Huntersville Fire said the wreck happened Thursday evening on I-485 east of Old Statesville Road. According to officials, one vehicle traveled through the center barrier. The crash is impacting traffic...
HUNTERSVILLE, NC・1 HOUR AGO
WSOC Charlotte

A shooter attacked a grocery store in an upscale Tennessee suburb on Thursday afternoon, killing one person and wounding 12 others before the shooter was subsequently found dead of an apparent self-inflicted gunshot wound at the store, authorities said. Collierville Police Chief Dale Lane said the shooting broke out at...
COLLIERVILLE, TN・2 HOURS AGO

CHARLOTTE, N.C. — Charlotte Douglas workers that have gotten attacked on the job said it’s now happening more often. It has been such a big issue at Charlotte Douglas that one local worker testified in front of congress Thursday, pushing for more to be done to protect them. Channel 9′s...
CHARLOTTE, NC・2 HOURS AGO
WSOC Charlotte

OLD TOWN, Maine — A police officer in Maine got an unusual call Monday after a deer fell into a swimming pool in Old Town, according to police. Video posted on Facebook and shared by police showed the officer, identified as Catie Denning, pulling the deer to the edge of the pool before getting the flailing animal out of the water.
MAINE STATE・6 HOURS AGO
WSOC Charlotte

BILLINGS, Mont. — (AP) — The boyfriend of Gabby Petito, whose body was found at a national park in Wyoming after a cross country trip with him, has been charged with unauthorized use of a debit card as searchers continue looking for him in Florida swampland, federal authorities announced Thursday.
BILLINGS, MT・1 HOUR AGO

MINNEAPOLIS — (AP) — The manager of a suburban Minneapolis Michaels store called police on a teenager looking for a job simply because he is Black and officers then used unreasonable force against him because of his race, a state agency that investigates civil rights abuses said in findings released Thursday.
MINNESOTA STATE・2 HOURS AGO
WSOC Charlotte

FORT MEADE, Md. — (AP) — Media calls to Fort Meade on Thursday were mistaken for callers portraying members of the media during an exercise, setting off false reports of a mass shooting at the base in Maryland, according to a base official. The base was conducting an exercise on...
FORT MEADE, MD・4 HOURS AGO
WSOC Charlotte