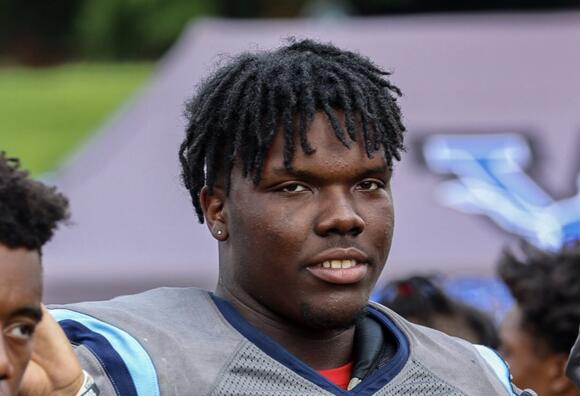 Christen Miller's stock has significantly risen over the last few months as he broke onto the national scene this offseason. The Cedar Grove High School student just announced his top four schools left remaining in his recruitment.

Miller lists Georgia, Ohio State, Oregon, and USC, all four programs see the four-star defensive lineman as a priority target in the 2022 class, especially the home state school of Georgia, after the Dawgs missed on Miller's friend and one of the top linemen in the class, Mykel Williams.

Georgia's perception of Miller changed over the offseason; they started to realize what kind of talent and potential the Ellenwood, Georgia native brought to the table.

Over the past few months, Georgia defensive line coach Tray Scott has been sure to prioritize Miller and make it known that the Bulldogs want him the class.

With Miller's friend, Mykel Williams, another Peach State product already committed to USC, it makes you wonder how big of a threat the Trojans are in this recruitment. If Miller wants to play with his friend, it would mean the Trojans are in prime position to snatch another top talent out of the Peach State.

Ohio State has consistently had one of the highest attendance numbers in college football. Ohio Stadium seats more than 100,000 fans, with the Buckeyes playing in front of a six-figure crowd nearly every week. This week is different, though. Ohio State is coming off a tough home loss to Oregon....
OHIO STATE・3 HOURS AGO
The Spun

One of the most-surprising results of college football’s Week 1 slate came at the Rose Bowl on Saturday evening. LSU, the No. 16 team in the country, was upset by Chip Kelly’s UCLA Bruins. The Tigers fell on the road, 38-27, on Saturday night. It’s been a tough post-national championship...
COLLEGE SPORTS・12 DAYS AGO
The Spun

Head coach Nick Saban may not have been pleased with Alabama‘s season-opening win over Miami, but former Florida quarterback Tim Tebow sure was. Following the 44-13 win over the Hurricanes, Saban suggested his team didn’t play a full 60 minutes. Meanwhile, Tebow couldn’t stop gushing over the performance from quarterback Bryce Young.
ALABAMA STATE・7 DAYS AGO
saturdaytradition.com

Trouble in Columbus? Ohio State fans are calling for Quinn Ewers to take over at QB

Ohio State struggled with Oregon in the first half of their marquee Week 2 matchup. The Buckeyes struggled to move the ball offensively, and fans are blaming the lack of production on starting quarterback. CJ Stroud’s numbers are fine, but he wasn’t able to lead OSU to enough points in the first half.
OHIO STATE・7 DAYS AGO

ESPN and SEC Network analyst Paul Finebaum joined Keyshawn Johnson, Jay Williams and Max Kellerman on ESPN Tuesday morning to discuss the USC coaching change. After news broke Monday that the school would move on from Clay Helton, everyone in the college football world developed a shortlist of potential candidates.
COLLEGE SPORTS・4 DAYS AGO
saturdaydownsouth.com

If Nebraska head coach Scott Frost wanted to show that he was still the man for the job at his alma mater, then the 2021 season didn’t get off to a great start. The former Cornhuskers quarterback returned to Lincoln ahead of the 2018 season as the university sought to turn the page from the Mike Riley era. So far, it hasn’t been a good return on investment as Frost has struggled to a 12-21 record, including a 9-18 mark in the Big Ten.
COLLEGE SPORTS・19 DAYS AGO
saturdaydownsouth.com

Indiana fans rip out entire bleacher during game against Cincinnati

The Indiana Hoosiers are having a huge game Saturday against No. 8 Cincinnati, as the Bearcats are primed for a College Football Playoff run. However, things haven’t started well for Cincy, as the Hoosiers are up 14-0 midway through the second quarter. It also seems that the Indiana student section...
INDIANA STATE・7 HOURS AGO
The Spun

Oklahoma football didn’t look like a College Football Playoff team based on the Sooners’ performance versus Nebraska on Saturday. College football fans were already skeptical of Oklahoma heading into Saturday’s game. The Sooners struggled to beat Tulane in Week 1 and then did what they were supposed to do against Western Carolina in Week 2. OU was supposed to then make a statement versus Nebraska on Saturday. It never happened.
OKLAHOMA STATE・7 HOURS AGO

Alabama head coach Nick Saban has a strong message for fans ahead of Saturday’s matchup against Florida. Despite Alabama being No. 1 in the latest AP Poll and being 2-0 after two strong weeks, Saban doesn’t want fans to get complacent. Saban wants fans to have respect for the opponents in order to maintain a strong level of enthusiasm throughout the year.
ALABAMA STATE・1 DAY AGO
The Spun

The Nebraska Huskers are putting up a fight at Oklahoma today, down 14-3 late in the third quarter. The offense hasn’t given the Husker defense much help, but they could also be much closer if not for the struggles of kicker Connor Culp. Things got off to a strong start...
NEBRASKA STATE・6 HOURS AGO
thespun.com

In what was supposed to be a quiet day in college football, several juggernauts like Clemson are struggling to put away opponents. The Tigers beat Georgia Tech 73-7 last season. Star quarterback Trevor Lawrence had 404 yards passing and five touchdowns in an explosive offensive outing. We knew Clemson would take a step back this season without Lawrence slinging the rock, but no one predicted the Tigers would lose their offensive identity entirely.
CLEMSON, SC・3 HOURS AGO
FanSided

West Virginia football fans got into a fight in the stands during Saturday’s game against Virginia Tech. When attending a sporting event, you are guaranteed to see some fans throwing hands at one another while sitting in the stands, for reasons known and unknown. This should not come as a surprise to any one. Well, we have another fight to share with you, this time in the college football world.
COLLEGE SPORTS・3 HOURS AGO

It’s only Week 3 of the college football season, but it appears Miami Hurricanes head coach Manny Diaz is already on the hot seat. After spending a few years as the Hurricanes’ defensive coordinator, Diaz was named the football program’s head coach in 2019. He showed a lot of promise in his season season, leading the Hurricanes to an 8-3 record.
MIAMI, FL・5 HOURS AGO
saturdaydownsouth.com

Things got a little testy between Nebraska and Oklahoma before their game on Saturday. The Cornhuskers are in Norman to take on the No. 3 Sooners. Oklahoma enters the game with a 2-0 mark, while Nebraska is 2-1 following a win over Buffalo on Sept. 11. It’s the 87th meeting between the 2 programs and the 50th anniversary of the “Game of the Century”, when No. 1 Nebraska beat No. 2 Oklahoma 35-31 on Nov. 25, 1971, en route to a 2nd straight national championship.
NEBRASKA STATE・9 HOURS AGO
FanSided

Notable Oklahoma fan and Fox Sports 1 analyst Skip Bayless was not pleased with how the Sooners escaped Nebraska with a tight win. The Oklahoma Sooners barely escaped the Nebraska Cornhuskers, and Skip Bayless is certainly not pleased with how it all went down. While the Fox Sports 1 analyst and longtime Sooners fan is relieved to be on the winning side, he was not particularly thrilled with how the game transpired.
NEBRASKA STATE・5 HOURS AGO
oklahoman.com

John Fey watched wide eyed as Johnny Rodgers streaked down the sideline on that punt return five decades ago. Fey couldn’t believe what he was seeing — and he wasn’t seeing it on TV. He was in Norman for the Game of the Century between OU and Nebraska, sitting on...
NEBRASKA STATE・2 DAYS AGO
The Spun

No. 5 Oklahoma just wrapped up a 23-16 win over Nebraska in a game that was much closer than many expected it to be. Nebraska fans aren’t really in the business of moral victories, but they should be encouraged by their team’s performance. Quarterback Adrian Martinez (289 passing yards, two total touchdowns) played one of his best games, and the Husker defense made life hard for OU quarterback Spencer Rattler and company.
COLLEGE SPORTS・5 HOURS AGO
On3.com

The No. 9 Ohio State Buckeyes will be without one of its top defenders in a Saturday afternoon home contest against the Tulsa Golden Hurricane, as defensive end Zach Harrison was been ruled out hours before kickoff. In place of Harrison, Javontae Jean-Baptiste will likely get the start opposite Tyreke Smith.
OHIO STATE・8 HOURS AGO
The Spun

Tim Tebow thinks one major upset will take place in college football this afternoon. Tebow, 34, joined the SEC Network on Saturday to break down the biggest games of the day. One of those games includes Alabama-Florida in “The Swamp.”. The Crimson Tide look like the best team in the...
NFL・8 HOURS AGO
NBC Sports

Former 49ers defensive player Parys Haralson, who spent his first seven NFL seasons with the franchise, died on Monday. He was 37. Haralson was a popular player in the locker room and with the fan base during his time with the 49ers. He was known for having close friendships with his teammates and lending support to those who needed it.
NFL・4 DAYS AGO