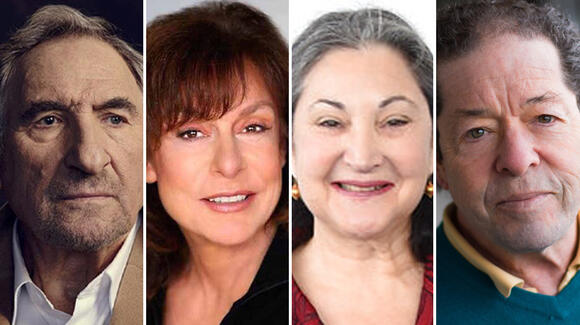 Steven Spielberg has added a new generation to the fictional family at the center of his semi-autobiographical film, which has the working title of “The Fabelmans.”

Oscar nominees Judd Hirsch (“Ordinary People,” “Independence Day”) and Jeannie Berlin (“The Heartbreak Kid,” “Succession”), and veteran stage and screen actors Robin Bartlett (“Mad About You,” “American Horror Story”) and Jonathan Hadary (“Veep,” “Girls5eva”) will play the older relatives of a young, aspiring filmmaker — played by Gabriel LaBelle (“The Predator”) — who is loosely based on Spielberg’s experiences as a kid in Arizona.

Hirsch, Berlin, Bartlett and Hadary are joining a high-powered ensemble cast led by Michelle Williams and Paul Dano, who are playing versions of Spielberg’s late mother and father; Seth Rogen, who is based on Spielberg’s favorite uncle; Julia Butters, playing the stand-in for Spielberg’s sister; and Sam Rechner, Oakes Fegley, Chloe East and Isabelle Kusman, who are playing high school classmates.

Spielberg co-wrote the screenplay with regular collaborator Tony Kushner (“Lincoln,” “West Side Story”), and both men are producing the film with Kristie Macosko Krieger, backed by Amblin Partners. Production is currently underway, with a release planned for 2022.

Hirsch earned an Oscar nomination for his role as a therapist in 1980’s best picture winner “Ordinary People.” He started his career on the sitcom “Taxi,” for which he won two Emmys, and he earned Tony awards for his performances in the Broadway plays “I’m Not Rappaport” and “Conversations with My Father.” And, he perhaps most famously played Jeff Goldblum’s doting father in the 1996 blockbuster “Independence Day.”

Berlin can currently be seen on HBO’s “Succession” as the tough-as-nails news director of the fictional cable network ATN. She earned an Oscar nomination for playing a jilted wife in Elaine May’s “The Heartbreak Kid,” and she’s appeared in HBO’s “The Night Of,” Woody Allen’s “Café Society,” Paul Thomas Anderson’s “Inherent Vice” and Kenneth Lonergan’s “Margaret.” She is represented by ICM Partners and Mills Kaplan Entertainment.

Since the 1980s, Bartlett has played a string of memorable roles, including the Coen Brothers’ “Inside Llewyn Davis,” Martin Scorsese’s “Shutter Island,” two seasons on the horror anthology “American Horror Story” and 46 episodes as Paul Reiser’s sister on “Mad About You.” Her Broadway and Off-Broadway credits include “Angels in America,” “Prelude to a Kiss,” “Yentl” and “The Seagull.” She is represented by Gersh.

Hadary has starred in ten Broadway productions, from the groundbreaking AIDS drama “As Is” to the go-for-broke musical comedy “Spamalot”; he earned a Tony nomination for his performance as Herbie opposite Tyne Daly in the 1989–1990 revival of “Gypsy.” Most recently, he appeared as billionaire prison magnate Sherman Tanz on HBO’s “Veep” and as sleazy manager Larry Plumb on Peacock’s “Girls5eva.” He is represented by BRS/Gage.

From Warner Bros. Pictures come director/producer Clint Eastwood’s uplifting and poignant drama CRY MACHO. The film stars Eastwood as Mike Milo, a one-time rodeo star and washed-up horse breeder who, in 1979, takes a job from an ex-boss to bring the man’s young son home from Mexico. Forced to take the backroads on their way to Texas, the unlikely pair faces an unexpectedly challenging journey, during which the world-weary horseman finds unexpected connections and his own sense of redemption.
MOVIES・15 DAYS AGO
Variety

Leonardo DiCaprio, Jennifer Lawrence, Meryl Streep, Rob Morgan and Jonah Hill are facing the threat of a comet hitting Earth in a new clip from the Netflix movie “Don’t Look Up.” The clip was shown during Netflix’s Tudum event to showcase its upcoming TV series and movies. The dark sci-fi comedy, directed by Adam McKay, stars Lawrence and DiCaprio as two low-level astronomers who try to warn politicians and others that the Earth is in danger as a giant asteroid approaches, only to be met with apathy and skepticism. (The comparison to reactions to climate change are not a coincidence.) Lawrence plays...
MOVIES・2 DAYS AGO
CinemaBlend

Matt Damon’s had a big year in Hollywood, heading down to Australia to reprise his funny MCU role in Thor: Love and Thunder and also becoming a player in the post-Covid theatrical resurgence with his movie Stillwater. That’s not even touching on his upcoming projects -- including one reuniting him with Ben Affleck -- however, despite all the new things coming up, Damon has been happy to reminisce about his career as well, and recently confirmed two big stories about his time filming Saving Private Ryan.
CELEBRITIES・4 DAYS AGO
TVGuide.com

October generally means spooky season, but the most exciting things coming to HBO and HBO Max next month (and there are many, many exciting things) aren't really all that scary — not in the traditional sense, anyway. I guess The Many Saints of Newark, the Sopranos prequel film, is frightening if the thought of entering the state of New Jersey freaks you out. Maybe you see Succession, which finally releases its third season in October, as a horror story about having to regularly interact with your crazy dad. Personally, I've decided that Dune, Denis Villeneuve's long-awaited sci-fi epic, is a frightening tale about the thought of Timothée Chalamet living on another planet where I can't regularly check up on what he's doing. Did that also just send a chill down your spine? Don't worry, it's all pretend.
MOVIES・3 DAYS AGO

Disney and 20th Century Studios have debuted the official trailer for Steven Spielberg’s “West Side Story.” The project, based on the iconic Leonard Bernstein and Stephen Sondheim musical of the same name, casts “Baby Driver” star Ansel Elgort and newcomer Rachel Zegler as star-crossed lovers Tony and Maria, respectively. Anticipation for the film is high, as the 1961 film adaptation of the musical was a cultural juggernaut with 10 Oscar wins, including Best Picture. Spielberg’s “West Side Story” is written by frequent collaborator Tony Kushner, who earned screenwriting Oscar nominations for penning the director’s “Munich” and “Lincoln.”
MOVIES・12 DAYS AGO
IGN

West Side Story: Watch the New Trailer for the Upcoming Film Directed by Steven Spielberg

“It is so shiny and new and enormous!” said actress Anna Kendrick at the September 22 Academy Museum of Motion Pictures press conference — the museum’s final pre-opening press conference after financing shortfalls, earthquake retrofitting, leadership do-overs, and a pandemic lockdown — before the museum opens its doors September 30, nearly four years after its originally scheduled (and wildly optimistic) opening date. Speaking in the round red-plush David Geffen Theater, which the Academy Museum hopes will attract multiple glitzy studio premieres (even if the bathrooms are all the way across a glass footbridge), Kendrick continued: “And it’s crammed with about 125...
MUSEUMS・2 DAYS AGO
film-book.com

WEST SIDE STORY (2021) Movie Trailer 2: A Love Story Blossoms in the Midst of a Gang Feud in Steven Spielberg’s Musical

As CBS and Paramount Plus Expand and Split This Year’s Tony Awards, Execs and Producers Explain Why

As the Tony Awards return Sunday for the first time in more than two years, CBS and White Cherry Entertainment’s Ricky Kirshner and Glenn Weiss faced a challenging task: How to hand out awards, celebrate the best in recent theater and — perhaps most crucially — hammer home the fact that Broadway is back and open for business. One result: Taking advantage of multiple platforms in the ViacomCBS universe by expanding the show to four hours (from its normal three hours on CBS) — but splitting time between Paramount Plus and CBS. Dubbed “The Tony Awards Present: Broadway’s Back,” the show...
MOVIES・2 DAYS AGO
The Hollywood Reporter

Mentor and collaborator Steven Soderbergh and director Eddie Alcazar are reteaming for Divinity, a thriller set to star Stephen Dorff, Moises Arias, Jason Genao, Karrueche Tran and Mike O’Hearn. Soderbergh, who will produce Divinity, earlier partnered up for Alcazar’s hyperstylized sci-fi feature debut Perfect, which stars Abbie Cornish, Garrett Wareing and Courtney Eaton, and debuted at SXSW. Divinity centers on two mysterious brothers, played by Arias and Genoa, who abduct a mogul (Dorff) during his quest for immortality. Meanwhile, a seductive woman played by Tran helps them launch a journey of self-discovery. Alcazar most recently debuted his stop-motion animated live action film The...
MOVIES・10 DAYS AGO
Us Weekly

Everything to Know About Steven Spielberg’s ‘West Side Story’ Remake: Cast, Release Date and More

Something’s coming! Ever since Steven Spielberg first floated the idea, his West Side Story adaptation has been a hot topic in Hollywood. The famed director initially expressed his hopes to recreate Stephen Sondheim classic for the big screen in March 2014, leading 20th Century Fox to pick up the rights to the project. Three years later, Tony Kushner revealed he was teaming up with Spielberg for the third time to write the movie’s screenplay. (They previously worked together on 2005’s Munich and 2012’s Lincoln.)
MOVIES・8 DAYS AGO
TheWrap

J.K. Simmons has joined the cast of Sheridan O’Donnell’s debut dramedy feature “Little Brother,” TheWrap has learned exclusively. The previously announced leads are Daniel Diemer (“The Half of It”) and Philip Ettinger (“The Evening Hour”). The film follows Jake and Pete Duffy (Diemer and Ettinger, respectively), who embark on a road trip after Pete’s recent suicide attempt.
MOVIES・4 DAYS AGO

The Best Audible Books to Listen to Right Now

All products and services featured by Variety are independently selected by Variety editors. However, Variety may receive a commission on orders placed through its retail links, and the retailer may receive certain auditable data for accounting purposes. We live in a glorious time in which it’s completely normal to fall...
BOOKS & LITERATURE・5 DAYS AGO
Variety

‘The Take’: The Emmys Wrap Up as Oscar Season Begins

As the Emmys come to a close, Oscar season ramps up. Netflix unveils its Britney Spears documentary and Apple TV Plus drops the trailer for Denzel Washington’s “The Tragedy of Macbeth.” And Hollywood mourns the loses of three more greats: Willie Garson, Melvin Van Peebles and Roger Michell. In the...
TV & VIDEOS・3 DAYS AGO
Variety

The first trailer for Paul Thomas Anderson’s “Licorice Pizza” is here. The film will have a limited release on Nov. 26 and expand nationwide on Dec. 25. Set in Los Angeles’ San Fernando Valley during the 1970s, “Licorice Pizza” stars Bradley Cooper, Benny Safdie, Valley native Alana Haim and Philip Seymour Hoffman’s son Cooper Hoffman, who will make his feature debut. Cooper will play a Hollywood director, while Hoffman will play a child actor and Safdie will play a politician running for office. Cooper’s character appears to be playing Jon Peters, the former hairdresser and film producer, who instructs Hoffman’s character on...
MOVIES・7 HOURS AGO
Deadline

EXCLUSIVE: Carrie Preston has boarded John Logan’s untitled feature directorial debut at Blumhouse, which has been billed as a LGBTQIA+ empowerment movie set at a gay conversion camp. The project from the three-time Oscar nominee was previously known as Whistler Camp.  Preston joins the already cast Theo Germaine and Kevin Bacon, the latter who is also serving as executive producer. Jason Blum and Michael Aguilar are producing. Scott Turner Schofield is also serving as EP. For seven seasons, Preston starred as Arlene Fowler, the sassy red-headed waitress on the hit HBO series True Blood. She won an Emmy playing Elsbeth Tascioni on CBS’...
MOVIES・4 HOURS AGO

[Editor’s note: The following post contains a minor spoiler for “The Many Saints of Newark.”] The upcoming “Sopranos” prequel movie “The Many Saints of Newark” takes place decades before the Emmy-winning HBO drama series, but series creator David Chase still managed to lure back one of the original show’s most popular actors. Michael Imperioli, who starred as Christopher Moltisanti on “The Sopranos,” reprises his role from beyond the grave as the posthumous narrator of “Many Saints.” Christopher died in the HBO series’ final seasons. The film’s plot focuses on Christopher’s father, Dickie Moltisanti (played by Alessandro Nivola). “That was the maraschino cherry...
MOVIES・3 HOURS AGO