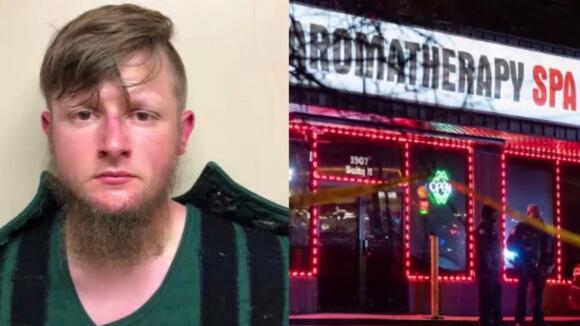 Long pleaded guilty to four counts of malice murder for the deaths of Xiaojie “Emily” Tan, 49; Daoyou Feng, 44; Delaina Yaun, 33; and Paul Michels, 54. He also pleaded guilty to charges of criminal intent to commit a felony, aggravated assault, possession of a firearm during commission of a felony and first-degree criminal damage to property.

Long was accused of killing eight people in shootings at three Atlanta-area spas on March 16, including Youngs Asian Massage Parlor. He still faces a possible death penalty sentence if he’s convicted in the four other killings in Atlanta, where he also faces charges of domestic terrorism with a hate crime enhancement in addition to murder, The Associated Press reported.

Many of the people killed in the March 16 shootings were of Asian descent, although investigators have said that race did not play a factor in the attack. Instead, authorities said he was motivated by a “sex addition.”

“This was not any kind of hate crime,” Cherokee County District Attorney Shannon Wallace said Tuesday, according to the AP.

Authorities previously said the 22-year-old shot five people, including Tan, Feng, Yaun and Michels, at the spa in Acworth before driving to Atlanta. About an hour after the shooting at Youngs Asian Massage Parlor, police responding to a call about a robbery found three women dead from apparent gunshot wounds at Gold Spa in Atlanta’s Buckhead neighborhood. While there, officers learned of a call reporting shots fired at Aromatherapy Spa across the street and found a woman who appeared to have been shot dead.

A reality television star from the Atlanta area was sentenced to 17 years in prison for conspiracy and wire fraud related to a Ponzi scheme. Maurice “Mo” Fayne, 38, of Dacula, Georgia, who starred in “Love & Hip Hop: Atlanta,” was convicted of bank fraud and making false statements to a financial institution related to a fraudulent Paycheck Protection Program loan application, according to a news release issued Wednesday by the U.S. Attorney’s Office for the Northern District of Georgia.
CELEBRITIES・7 HOURS AGO
WSOC Charlotte

HAMPTON COUNTY, S.C. — South Carolina detectives have opened an investigation into the 2018 death of the Murdaugh family’s housekeeper, one day after revealing that patriarch Alex Murdaugh is accused of trying to orchestrate his own murder for millions in insurance money. The South Carolina Law Enforcement Division announced the...
HAMPTON COUNTY, SC・15 HOURS AGO
WSOC Charlotte

FAYETTEVILLE, N.C. — A North Carolina man is accused of involuntary manslaughter after his 17-month-old son was found unresponsive in a vehicle outside his home, authorities said. Wayne Nesbitt Jr., 36, of Fayetteville, was arrested Tuesday in connection with the hot car death of his son, Oskar Grettir Nesbitt, according...
FAYETTEVILLE, NC・6 HOURS AGO
WSOC Charlotte

NORTH PORT, Fla. — Police are investigating the disappearance of 22-year-old Gabrielle Petito after her boyfriend returned from a cross-country road trip without her. Petito and her boyfriend, Brian Laundrie, set out on a cross-country road trip in early July. The couple drove their Ford Transit van from Florida to New York and then drove west. The pair planned on stopping at several national parks along the way, according to WFSB. The cross-country journey was supposed to end in Portland, Oregon.
NORTH PORT, FL・17 HOURS AGO

MANCHESTER, N.H. — A New Hampshire father has been arrested after police said he put his infant daughter in a clothes dryer and turned it on. Police have charged Michael Higgins, 34, with reckless conduct, endangering the welfare of a child and criminal threatening, according to information Manchester Police shared on Facebook.
MANCHESTER, NH・18 HOURS AGO
WSOC Charlotte

Chauvin to be arraigned for alleged civil rights violation

MINNEAPOLIS — (AP) — A former Minneapolis police officer convicted of murder in the death of George Floy d is scheduled to be arraigned Thursday for allegedly violating the civil rights of a teenager in a separate case that involved a restraint similar to the one used on Floyd. Derek...
MINNEAPOLIS, NC・7 HOURS AGO
WSOC Charlotte

PHOENIX — An Arizona woman is accused of fatally sedating her two young daughters with over-the-counter and prescription drugs, authorities said. Retta Renee Cruse, 35, of Phoenix, was booked on two charges of first-degree murder on Tuesday, according to Maricopa County Sheriff’s Office online booking records. She is accused of the deaths of her children, Royal McIntyre, 4, and Aleyah McIntyre, 9, KNXV reported. The children were found unresponsive in a bed in a home last week, the television station reported.
ARIZONA STATE・10 HOURS AGO
WSOC Charlotte

ATLANTA — (AP) — A former cast member on the reality television show Love & Hip Hop: Atlanta has been sentenced to more than 17 years in federal prison for conspiracy and wire fraud related to a Ponzi scheme and related charges involving a fraudulent Paycheck Protection Program loan application.
12 HOURS AGO

SOUTH BEND, Ind. — An Indiana woman who was allegedly intoxicated and tested positive for COVID-19 is accused of biting a medic while being treated, authorities said. Elizabeth Wilson, 35, of South Bend, was charged with battery against a public safety official, according to St. Joseph County online booking records.
12 HOURS AGO
WSOC Charlotte

A member of the far-right Oath Keepers militia group that stormed the U.S. Capitol on Jan. 6 pleaded guilty Wednesday and will cooperate with investigators against his fellow extremists, marking another win for the Justice Department in its major conspiracy case stemming from the attack. Jason Dolan, 45, is the...
ADVOCACY・13 HOURS AGO
WSOC Charlotte

DENVER — (AP) — A civil rights investigation that was launched amid outrage over the death of Elijah McClain — a Black man put into a chokehold during an encounter with suburban Denver police two years ago — found a deeply engrained culture of racially biased policing within the department, Colorado's attorney general said Wednesday.
DENVER, NC・13 HOURS AGO

GASTON COUNTY, N.C. — A homicide investigation is underway in Gaston County after a man was found dead inside his home. Police responded just before 7 p.m. Tuesday to a report of a suspicious death at a home on Old Spencer Mountain Road near Dallas. [ ALSO READ: Suspect in...
GASTON COUNTY, NC・13 HOURS AGO
WSOC Charlotte

CONCORD, N.C. — A complaint has been made against the Concord Police Department related to an August traffic stop that was captured on cellphone video and posted online. Oakhurst Legal Group Attorney Darlene Harris released a statement Tuesday saying she is representing Davion Pringle, Imani Grier, and Malissa Baxter concerning a “violent act of police misconduct” from the Cabarrus County Sheriff Department and Concord Police Department on Aug. 27.
CONCORD, NC・13 HOURS AGO
WSOC Charlotte

MINNEAPOLIS — (AP) — The Minnesota Supreme Court on Wednesday threw out the third-degree murder conviction of a former Minneapolis police officer who fatally shot a woman who had called 911 to report a possible rape behind her home. In its ruling in the case of Mohamed Noor, the Supreme...
MINNEAPOLIS, NC・18 HOURS AGO