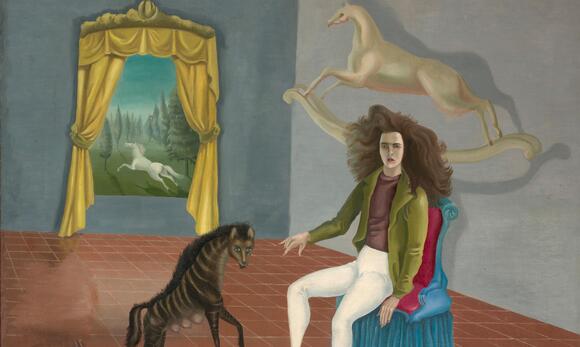 A globe-spanning surrealism survey, a Cornelia Parker retrospective and a blockbuster Cézanne exhibition are the highlights from Tate’s 2022 season, which is promising to “offer fresh perspectives on key figures, movements and subjects in art history”.

Surrealism Beyond Borders will come to Tate Modern in February and take a internationalist look at the movement, which began in Europe but would make its way around the world from Tokyo and Mexico City to the Egyptian Art et Liberté movement and the Afro-surrealist work of Aime Cesaire in Martinique .

Tate Modern will also hold a major Cézanne exhibition in the autumn. It will feature paintings that have never been displayed in the UK with a promise to “explore the ambitions, innovations and contradictions that defined Cezanne’s life and work”.

Pieces by Polish sculptor Magdalena Abakanowicz , who specialised in textile work and could trace her lineage back to Genghis Khan, will visit Tate Modern from November 2022. The annual Hyundai commission, for which an artist take over Tate Modern’s Turbine Hall and was awarded to Kara Walker in 2019 and Anicka Yi last year, is still to be announced.

Tate Britain will host two major retrospectives: from April, Walter Sickert’s late 19th- and early 20th-century paintings, which captured “ a low-life late Victorian world of music halls and shadowy interiors ”; and a career-spanning Cornelia Parker survey opening in May will include not only the “ cartoon violence ” of her installation work but also sculpture, film, photography, drawing and embroidery.

Hew Locke , who featured in Artist & Empire: Facing Britain’s Imperial Past in 2016 alongside Sonia Boyce, will return to Tate Britain to the Duveen Galleries where he will create new work in March 2022.

In November, Tate Britain will host the Lynette Yiadom-Boakye exhibition , which first opened in December 2020 but was cut short due to the Covid-19 pandemic, for a further three months. The work of documentary photographer Bill Brandt, the sculptor Anthony Caro and a survey of the Norwich school of painters will also be on display into 2023.

The institution, which has had a difficult Covid-19 pandemic with staff protests after two rounds of job cuts across its commercial and gallery arms, welcomes Vietnamese artist Thao Nguyen Phan to its St Ives location in February after a well received show at Chisenhale in October 2020.

The Cornish gallery will also offer a “homecoming” to Barbara Hepworth with a major exhibition of her work, which was first seen at the Hepworth Wakefield in 2021 to mark its 10-year anniversary.

Tate Liverpool will again host the Turner prize after it was first held there in 2007 , and will also unveil Radical Landscapes in May, which is billed as a group show that will explore how the British countryside has been depicted as a place of “mysticism, experimentation and rebellion” by artists.

The French painter Paul Cézanne (1839-1906) is considered a pioneer who paved the way for cubist and abstract art, but his revolutionary style may be most evident in his drawings. Correspondent Rita Braver visits New York's Museum of Modern Art, where more than 250 of Cézanne's watercolors and sketches on paper are featured in a landmark exhibition, "Cézanne Drawing."
VISUAL ART・11 DAYS AGO
Screendaily

As the 69th edition of the San Sebastian Film Festival gets underway today (September 17), the festival boasts an increased in-person presence as well as extending last year’s hybrid approach to its industry activities. All activities will take place in-person (apart from, appropriately enough, a talk on artificial intelligence and...
MOVIES・6 DAYS AGO
allthatsinteresting.com

The stash of coins found in Brittany includes a 1646 "Louis d'Or" so rare it isn't even mentioned in one French currency guide and thought to be worth over $17,000 alone. It was during a seemingly ordinary restoration job in 2019 that the three French builders made their discovery. While tearing up the side of a mansion in Plozévet, Brittany, they discovered a hidden stash of gold coins embedded in the wall. Minted during the reigns of Louis XIII and Louis XIV, their value has since been estimated at over $350,000.
ECONOMY・14 DAYS AGO
Hello Magazine

The Duchess of Cambridge headed out on Wednesday evening to an event in order to meet and thank the partners of the Hold Still project. Photos from the event were shared on the Duke and Duchess' official social media accounts. Kate launched the photographic project last year to capture what...
BEAUTY & FASHION・1 DAY AGO

Archaeologists have found the remains of an ancient church at the site of St Mary's Church, Stoke Mandeville, Bucks. The team were excavating a site which is located along the HS2 railway route when they made the discovery. The Norman church dates back to 1080 and the remains found are...
WORLD・15 DAYS AGO
Mental_Floss

Considering that Queen Victoria spent 63 years on the throne—making her the UK’s second longest-reigning monarch, behind Queen Elizabeth II—it’s no wonder that a certain mythos has cropped up around her. According to it, she was a staid, prudish, humorless ruler who wore black for decades to mourn the death of her husband, Prince Albert.
CELEBRITIES・14 DAYS AGO
The Sun US

Princess Beatrice baby name tipped to be sweet nod to her grandma, as bookies claim Anna & Emily are also frontrunners

PRINCESS Beatrice has given birth to a baby girl, and bookies have revealed that the top predicted name is Sarah - in a nod to grandma Sarah Ferguson. Beatrice, 32, who is the daughter of Prince Andrew and Fergie, confirmed the happy news of the arrival and said she and husband Edoardo Mapelli Mozzi are “delighted.”
CELEBRITIES・3 DAYS AGO
Reuters

OSLO (Reuters) - Norwegian police said on Friday they had seized a large number of archaeological artefacts reported missing by Iraqi authorities, including what is presumed to be cuneiform tablets from ancient Mesopotamia. The objects were found by the Norwegian National Authority for Investigation and Prosecution of Economic and Environmental...
EUROPE・20 DAYS AGO

Her Majesty Queen Elizabeth II has a large portfolio of royal residences around the UK, including the 775-room Buckingham Palace and her "paradise in the Highlands", Balmoral Castle, so the monarch is never short of a place to stay, but there is one royal home which she has never ever lived in herself.
ENTERTAINMENT・3 DAYS AGO
BBC

Rihanna, the farmer, the field and the cover up a decade on

It's been 10 years since one of the world's biggest pop stars was asked to "cover up" while filming an award-winning music video in Northern Ireland. It was farmer Alan Graham who talked that talk to Rihanna over how she was dressed while filming the We Found Love video in his field near Bangor, County Down.
MUSIC・6 HOURS AGO
Hello Magazine

Princess Eugenie lives with her husband Jack Brooksbank and their son August in Prince Harry and Meghan Markle's UK base of Frogmore Cottage – and the cosy home has the most amazing kitchen. In a candid video, the royal revealed a glimpse of her beautiful cooking space, while filming her...
CELEBRITIES・12 HOURS AGO
Best Life

This has hardly been a banner year for the Royal Family. Between the sexual assault allegations against Prince Andrew resulting in a lawsuit and the claims of racism and neglect from Prince Harry and Meghan, Duchess of Sussex, the House of Windsor has been in crisis mode for much of 2021. On top of that, the royals also suffered the devastating loss of the family's patriarch, Prince Philip, who would have celebrated his centennial birthday in June.
CELEBRITIES・11 DAYS AGO

Princess Eugenie was spotted attending a wedding in Italy in a new photo that surfaced on social media at the weekend. In a smiling snap taken outside the ceremony, the Princess wore a delicate peach dress designed by Peter Pilotto along with her Anya Hindmarch Marano clutch bag. According to...
WORLD・11 DAYS AGO
celebratingthesoaps.com

The Bold and the Beautiful spoilers reveal that Paris Buckingham (Diamond White) has an epiphany about her situation with John “Finn” Finnegan (Tanner Novlan). After getting back to the real world, Paris tries to make it up to Zende Forrester (Delon de Metz). Paris surprises Zende with a surprise “Dodger” date night.
TV SERIES・7 HOURS AGO
Sourcing Journal

New “sentiments of simplicity and spontaneity” combine to create a striking Spring/Summer 2022 color forecast for London Fashion Week, according to the Pantone Color Institute, the color authority’s trend forecasting arm. Comprise of ten trend-driven colors that span “lighthearted airy pastels” to “visually arresting brights” and five grounding colors, the palette aims to inspire playful creativity and “unconstrained expression that is full of life,” Pantone stated. Super Sonic, an electric blue, and Fragile Sprout, an acidic green/yellow, are among the most intense colors. Coral Rose serves as the season’s key floral tone with an “energizing presence [that] brings a sense of excitement,” while...
DESIGNERS & COLLECTIONS・2 DAYS AGO
Daily Mail

Lady Louise steps into the spotlight! Prince Edward's daughter, 17, takes centre stage in Prince Philip: The Royal Family Remembers as she leads The Firm in paying tribute to the Duke of Edinburgh

Lady Louise Windsor took centre stage in a television documentary tonight as the teenager lead The Firm in paying tribute to her grandfather Duke of Edinburgh. Prince Philip: The Royal Family Remembers, which aired tonight at 9pm on BBC One, featured interviews from all of the Queen, 95, and Philip's children - the Prince of Wales, 72, the Princess Royal, 71, the Duke of York, 61, and the Earl of Wessex, 57.
CELEBRITIES・1 DAY AGO
HelloBeautiful

Naomi Campbell clearly has no plans to remove her foot from our necks.
DESIGNERS & COLLECTIONS・2 DAYS AGO
The Independent

Details of Queen Victoria and Albert’s arguing revealed in letters

Prince Albert’s personal letters to Queen Victoria, some of which detailed arguments between the couple, have been made available online.The letters, which were previously only seen by historians, have been published by the Royal Collection Trust as part of its project on the life and legacy of the Prince Consort.Queen Victoria and Prince Albert married in February 1840, four months after their engagement in October 1839.In one letter, written in Albert’s native German and translated by the Mail Online, he accuses the Queen of losing her “self-control” during an argument.“You have again lost your self-control quite unnecessarily. I did not...
CELEBRITIES・12 HOURS AGO
Robb Report

Who says yachts can’t inspire childlike wonder? Not Lürssen, which is showing off a whimsical new superyacht concept dubbed Alice at this year’s Monaco Yacht Show. As the moniker suggests, the emission-free vessel is heavily inspired by Lewis Carroll’s 1965 fantasy classic, Alice’s Adventure in Wonderland. Measuring 322 feet, the Alice will feature five fantastical decks. But in a twist right out of Carroll’s book, a main deck won’t be one of them. In a YouTube video previewing the concept, the German shipyard’s designer Jim Robert Sluijter said that the idea for this came from talking to yacht owners, many of whom...
BOATS & WATERCRAFTS・1 DAY AGO