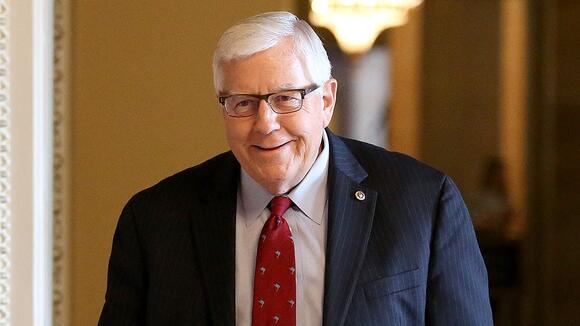 Enzi, 77, was known as one of the more conservative lawmakers during his time on Capitol Hill, where he served for four terms in the Senate before retiring late last year. The senator served as chairman of the Senate Budget Committee and Senate Health, Education, Labor and Pensions Committee.

The former senator was involved in drafting more than 100 bills signed by four different presidents during his tenure in the Senate, according to the Casper Star-Tribune.

Wyoming Sen. John Barrasso (R), who served alongside Enzi, called him "one of the most consequential public servants of our time," while Wyoming Rep. Liz Cheney (R) referred to the former senator as "a straight-shooter, an honest broker, and a soft-spoken but powerful advocate for the causes he cared deeply about."

"This is a sad day for Wyoming and for America," Cheney said in a statement. "Mike was an absolute giant in our state and his sudden loss just months after retiring from the U.S. Senate is difficult for all of us to accept."

Prior to his long career in politics, Enzi served in the Wyoming National Guard and later built upon his father’s shoe business in Gillette. He shortly thereafter started his foray into politics, serving as mayor of the town from 1975 to 1983.

Enzi credited Gillette with kick-starting his political career during an interview with The Associated Press.

“Diana and I got married and the next week we moved here,” the former senator said, referring to his wife. “What we were intending to do was start a life, and we started our shoe store.

“Then we got to build a community. Then I got to do some things at the state level, then the federal level. It all started here and is based on what I learned while I was here.”

Enzi later served in the Wyoming House of Representatives in the late 1980s and early 1990s before completing a six-year stint in the state Senate.

Enzi announced in 2019 that he would not be seeking reelection in 2020, saying he did not want to be “burdened with the distractions of a campaign” while wrapping up his fourth term.

Enzi reflected on the need for Republicans and Democrats to come together during his final Senate floor speech in 2020.

“People sometimes think compromise is the answer,” Enzi said. “I think it means I give in to something I don’t like, and you give into something you don’t like, and then we wind up with something no one likes. It’s not legislating. But when it comes to legislating, often the best way to get something everyone can agree on is to leave out the things you don’t agree on, and focus on what you can get done.”

The former senator’s son, Brad Enzi, first announced in a tweet on Sunday that his father had been involved in an accident. An update was posted on Enzi’s Twitter account on Monday, saying Enzi had been airlifted after the accident on Friday from Gillette to UCHealth Medical Center of the Rockies in Loveland, Colo.

Enzi is survived by his wife, Diana, and three children.

President Biden received his booster shot of the Pfizer/BioNtech COVID-19 vaccine Monday at the White House, just days after the Food and Drug Administration and the head of the Centers for Disease Control and Prevention approved the third dose for Americans over 65, those with an underlying health conditions and front-line workers at higher risk of exposure to coronavirus.
POTUS・1 DAY AGO
NBC News

WASHINGTON — Top military leaders said Tuesday that they had recommended to President Joe Biden that the U.S. keep 2,500 troops in Afghanistan even after the Aug. 31 withdrawal deadline, contradicting the president's assertion last month that his advisers did not tell him to leave a small military presence in the country.
MILITARY・7 HOURS AGO
ABC News

Liberals on Tuesday sent a stern warning to Democratic leaders that a bipartisan infrastructure bill cannot pass through the House as long as Senate centrists remain non-committal on the larger social benefits package at the heart of President Biden 's agenda. "If she were to call the bill, it will...
CONGRESS & COURTS・2 HOURS AGO

BENI, Congo (AP) — Twenty-one workers for the World Health Organization in Congo have been accused of sexually abusing people during a Ebola outbreak, a WHO-commissioned panel said Tuesday in a report that identified 83 alleged perpetrators connected to the 2018-2020 mission. The panel released its findings months after an...
PUBLIC SAFETY・8 HOURS AGO
CBS News

House Democrats are considering holding a vote Tuesday on a stand-alone bill to lift the debt ceiling, after Senate Republicans on Monday blocked a bill that included both a debt-limit suspension and government funding. Speaker Nancy Pelosi (D-Calif.) told reporters that action on a clean debt-limit bill is “among our...
CONGRESS & COURTS・5 HOURS AGO
CBS News

Ford and a partner company say they plan to build three major electric-vehicle battery factories and an auto assembly plant by 2025. The investment in the future of EV technology could create an estimated 10,800 jobs and shift the automaker's future manufacturing footprint toward the South. The factories, to be...
BUSINESS・8 HOURS AGO

North Korea fired a missile Tuesday while their envoy to the United Nations was condemning the U.S. for its “hostile” policies towards the country. The missile was fired from Jagang into the sea off the country’s east coast, Reuters reported. The test came as North Korea's U.N. envoy, Kim Song,...
MILITARY・5 HOURS AGO
Fox News

A federal judge ruled Monday that John Hinckley Jr. can be unrestrictedly released next year, more than 40 years after he shot then-President Reagan in 1981. Hinckley was committed to St. Elizabeth's hospital for more than 34 years before he was released under certain restrictions in 2016. "If he hadn’t...
CONGRESS & COURTS・1 DAY AGO