Bitcoin reverses rally to drop below $38,000 after Amazon quashes speculation about crypto payments 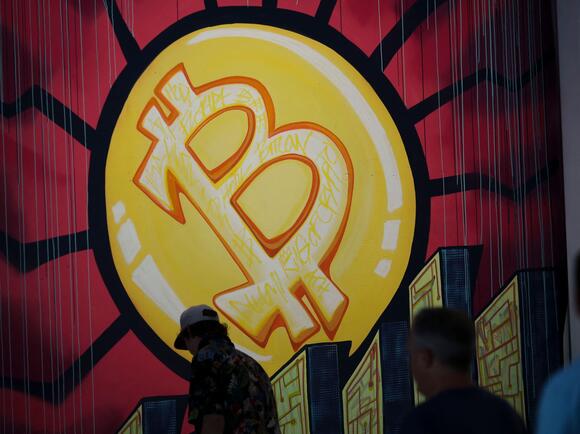 Bitcoin 's price tumbled below $38,000 on Tuesday, retreating from the previous day's gains after online retail giant Amazon quelled rumours that it plans to accept crypto payments for purchases on its platform.

Bitcoin had briefly broken above $40,000 on Monday, rising above that level for the first time in six weeks. The surge was driven by a combination of positive developments , which included an Amazon job posting that indicated its interest in digital currencies and a report the US e-commerce giant had been working since 2019 on plans to accept bitcoin payments by the end of 2021.

That raised hopes among investors that cryptocurrencies could be more widely accepted as a means of payment, analysts said.

But Amazon rejected the report in an email to Insider on Tuesday. "Notwithstanding our interest in the space, the speculation that has ensued around our specific plans for cryptocurrencies is not true," a company spokesperson said.

At the same time, the company noted it is exploring developments in digital currencies and signaled its interest in using new payments technologies on its retail platform.

"We're inspired by the innovation happening in the cryptocurrency space and are exploring what this could look like on Amazon. We believe the future will be built on new technologies that enable modern, fast, and inexpensive payments, and hope to bring that future to Amazon customers as soon as possible," the spokesperson said.

Bitcoin's slide was a reaction to the dashing of hopes that Amazon is issuing its own digital coin or going to accept tokens as payment, Jeffrey Halley, a senior market analyst at OANDA, said in a note.

"Despite today's retreat, the digital Dutch tulip is still holding onto most of its gains from yesterday," he said. "A move higher through the 100-day moving average will signal the next leg higher."

Read More: Kraken has paid out more than $100 million in staking rewards this year as traders staked nearly $5 billion on the crypto exchange to earn interest. The exchange's product chief explains what staking is, and shares 3 of the top-yielding tokens on its platform.

Whale buys $170 million in Bitcoin after dip below $50K

A mysterious whale with $4.9 billion worth of BTC recently added another $18 million in Bitcoins to their holdings. Analysts predict that October will be filled with sellers' woes, in a period of BTC accumulation by large wallet investors. The whale is accumulating since price dropped below $52,000, analysts label...
MARKETS・18 HOURS AGO
CoinTelegraph

Bullish optimism is on the rise across the cryptocurrency market on Sept. 23 as prices continue to recover from this week's volatility which was the result of regulatory pressure on the crypto sector, the Federal Open Market Committee meeting on the Fed's interest rate hikes and monetary policy, along with fears that the Evergrande situation would ripple out to impact global financial markets.
STOCKS・14 HOURS AGO
MarketWatch

How the dean of valuation prices loss-making tech stocks — and his views on Amazon, Netflix and Airbnb

Here's how to value loss-making companies, from the so-called dean of valuation.
BUSINESS・19 HOURS AGO
GOBankingRates

How These Major Cryptos Have Fared in 2021

Cryptocurrency has been a hot topic the last few years in the financial world, but not all cryptos are created equal. While some cryptos like Bitcoin and Ethereum get a lot of press, there are...
MARKETS・16 HOURS AGO

Robinhood doubles down on cryptocurrency with new wallet offering

Over half of Robinhood’s transaction-based revenue came from cryptocurrency trading last quarter.
MARKETS・13 HOURS AGO
MarketWatch

In a vote of confidence for more modern remittance technology, shares of Remitly Global Inc. popped more than 20% in their initial-public-offering debut Thursday, though they later pulled back from the opening price.
STOCKS・14 HOURS AGO
Markets Insider

"Make no mistake - this is a positive development for the industry and the millions of innovators, consumers, and investors," Binance said.
MARKETS・19 HOURS AGO
The Independent

Twitter has announced new features for its platform, including more flexible controls and the ability to send cryptocurrency between users.Twitter is adding Bitcoin to its Tips feature, which allowed users to send money to others through PayPal and other third-party services, and rolling that out throughout the world.This allows users to add their bitcoin wallet to their profile and send the cryptocurrency directly within the app, starting today, through Strike, a third-party a payments application built on the Bitcoin Lightning Network.Breaking: Twitter is adding the ability to pay users with Bitcoin directly in the app as it rolls out its...
INTERNET・16 HOURS AGO

Cathie Wood says Ark Invest would sell Tesla if the stock hits her $3,000 price target by next year

Fed ‘Working Proactively’ To Issue Its Own Digital Dollar — Could It Topple Bitcoin and Other Cryptocurrencies?

Fed Chairman Jerome Powell reiterated yesterday that the Fed is in the process of evaluating the issue of a central bank digital currency (CBDC) and that it will release a whitepaper on digital...
BUSINESS・14 HOURS AGO
MarketWatch

Shares of Eargo Inc. lost more than two-thirds of their value on Thursday, after the hearing aids maker disclosed that it was the target of a government investigation for insurance fraud.
STOCKS・13 HOURS AGO
MarketWatch

Target plans to hire 100,000 seasonal workers for the holidays
BUSINESS・15 HOURS AGO
MarketWatch

Bitcoin and several other cryptocurrencies are showing strong signs of recovery following the Monday flash crash, which wiped out nearly $200 million from the crypto market. While bitcoin’s value has not recovered to its pre-Monday levels of $47,000 yet, its price rose above $44,000 on Thursday, and has since stabilised.Its price is up by about 2 per cent in the last 24 hours compared to its surge by about 4 per cent in the day earlier.Ethereum (ether), Solana (SOL), and dogecoin are also showing signs of stabilising after a phase of recovery. The prices of these cryptocurrencies have not...
STOCKS・5 HOURS AGO
u.today

Bitcoin Recovers After Brief Fall Below $40,000

The global flagship cryptocurrency has started a gradual recovery after nosediving below $40,000 earlier today. Bitcoin goes under $40,000 first time since August. After the leading crypto declined lower than $40,000 for the first time since August and got more criticism from financial regulatory agencies, Bitcoin has managed to reverse and reach the $42,000 level.
STOCKS・1 DAY AGO
Zacks.com

Today’s episode of Full Court Finance at Zacks quickly breaks down where the market stands at the moment following Monday’s big selloff. The episode then dives into two established giants trading at attractive levels amid the pullback that investors with long-term horizons might want to buy. The S&P 500 dropped...
STOCKS・1 DAY AGO
MarketWatch

Shares of Marin Software Inc. were both the biggest gainers and most active on major U.S. exchanges in afternoon trading Wednesdasy, after the digital advertising disclosed that it renewed a revenue share agreement with Alphabet Inc.'s Google LLC. The stock rocketed 58.7% on volume of 114.6 million shares, which compared with the full-day average of about 4.6 million shares. The company said the agreement with Google, which is for Marin to develop its enterprise technology platform and software products, is effective Oct. 1. That takes the place of the current revenue share agreement, which was entered into in...
STOCKS・1 DAY AGO
Markets Insider

Should Evergrande fallout and one ugly trading week prompt you to reconsider your investment strategy?

'We're being tested to see if our portfolio allocation is appropriate for our risk tolerance.'
STOCKS・1 DAY AGO