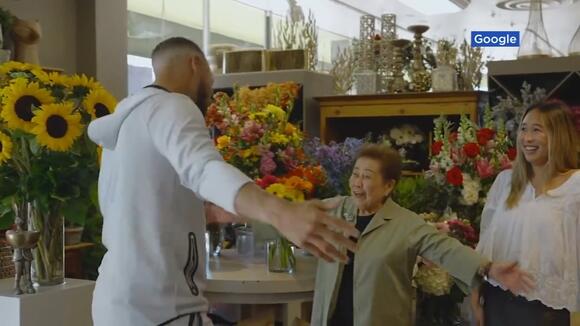 A sassy 90-something-year-old senior at the helm of her family's three-generations old flower shop in San Mateo is one of the stars of a new Google-sponsored video with Warriors star Stephen Curry. ABC7 News anchor Dion Lim first met Mayme Leong before the pandemic during a Valentine's Day story on Ah-Sam Florists. Known by her family and customers for her one-liners, she was dubbed the "sassy senior." One who still did not want to reveal her true age. RELATED: Stephen Curry steps up for community while playing at MVP level "I don't want anyone to know how old I am! Walking downtown and people saying oh look at that old lady," she chuckles. Out of the blue one day, relative Lori Leong received a phone call that caught her off-guard. "I was surprised, wondering if this is truly happening. Or is it someone playing a hoax on us?" said Leong. It was a representative from Curry's team asking for Ah-Sam to be a part of a new commercial featuring two other local businesses reopening after the pandemic, Antoine's Cookie Shop and pet store Bow Wow Meow. WATCH: Sassy senior behind San Mateo's legendary Ah Sam Florist busy on Valentine's Day eve

A sassy senior citizen isn't slowing down anytime soon when it comes to making sure Valentine's Day goes off without a hitch at her family's legendary flower shop, Ah Sam Florist in San Mateo.

Days later, Curry showed up with a camera crew and Mayme showed the point guard how to "make a splash" with flower arrangements. "He picked up flowers and I taught him how to cut it...I said, well, you play basketball, you better not use a knife because if you cut yourself you won't play again," said Mayme. The commercial is an ode to reopened businesses after a challenging year. Ah-Sam was not exempt and spent much of the pandemic closed. "With the way things have been I hope it'll be better next year," said Mayme, as she demonstrated how to arrange a bouquet of peonies. RELATED: Stephen Curry makes call to ICU nurse at Oakland hospital to say thanks She is just appreciative that after more than 50 years in the industry, to meet one of her favorite players...who also seemed to have a good time too. You can watch the full video here.

3 Unhappy Stars the Warriors Need to Trade For

The Golden State Warriors see this upcoming 2021-22 season as the year they could finally compete again for an NBA Championship following a 5-year dominance from 2015 to 2019. Stephen Curry, Klay Thompson, and Draymond Green have proven in the past that they are capable of leading a squad to the top of the mountain. But with all three of them going up there in age, and Thompson, in particular, coming off two of the most catastrophic injuries in the game, doing so may prove to be difficult, especially with the competition getting stronger.
NBA・29 DAYS AGO
fadeawayworld.net

The Met Gala 2021 just took place this evening, and a who's who of guests attended the vent. The annual event, which is held by New York's Museum of Metropolitan Art, hosts a collection of some of the biggest names in the world. The event is known for major celebrities...
NBA・10 DAYS AGO
basketball-addict.com

The Golden State Warriors aren’t done making changes in the crew. Now, Stephen Curry and Klay Thompson will get even more help for the upcoming season with the latest addition to the squad. The Warriors front office isn’t just focusing on the players’ roster but on the coaching staff as well. Following the recent changes […] The post Stephen Curry, Klay Thompson get more help with latest Warriors addition appeared first on ClutchPoints.
NBA・10 DAYS AGO
ClutchPoints

The Golden State Warriors are one of the remaining teams that have yet to finalize their roster heading into the new season. With training camp officially kicking off in the coming weeks, the Dubs are reportedly eyeing a former Chicago Bulls point guard as a potential backup for Stephen Curry.
NBA・10 DAYS AGO

LeBron James and wife Savannah James had a good reason for skipping Monday’s Met Gala. The couple opted out of walking the red carpet in New York City to celebrate their eight-year anniversary, the Los Angele Lakers star revealed in a post on Instagram on Tuesday. “Our own personal Met...
NBA・9 DAYS AGO
AllPacers

Steph Curry Or Giannis Antetokounmpo? The Golden State Warriors Star And Milwaukee Bucks Star Both Get The Same Rating In NBA 2k22

Steph Curry of the Golden State Warriors is a two-time NBA MVP, and Giannis Antetokounpo of the Milwaukee Bucks has won the MVP award the same amount of times. Curry is a three-time champion, and Antetokounmpo won his first championship this past season. Antetokounmpo has also won a Defensive Player...
NBA・7 DAYS AGO
ClutchPoints

Isaiah Thomas is a well-traveled NBA veteran. Next stop, San Francisco? The Golden State Warriors and Stephen Curry are hoping to come back in a big way after missing the NBA playoffs two seasons in a row. Klay Thompson intends to make his return around Christmas after missing two straight...
NBA・7 DAYS AGO
ClutchPoints

Former Golden State Warriors center JaVale McGee has had one of the wildest career arcs in recent memory. He went from promising young talent with the Washington Wizards to ridiculed Shaqtin’-a-fool mascot in just a few years in the league. It wasn’t until his stint in the Bay Area with...
NBA・4 DAYS AGO

High-profile athletes from various sports, like Stephen Curry, Russell Westbrook, Serena Williams, Naomi Osaka and Lewis Hamilton, showed up to support the Met Gala 2021 in New York. As usual in the annual fundraising affair–returning from a one-year hiatus–celebrities and personalities flaunted their wild and crazy costumes on the red...
BEAUTY & FASHION・10 DAYS AGO
ClutchPoints

The battle for the Golden State Warriors’ final roster spot is heating up, as a new contender emerges to contend for that coveted spot as backup to Stephen Curry. As per Anthony Slater’s report on The Athletic, the Warriors thought former Indiana Pacers guard Darren Collison looked good in his workout. (via The Athletic, u/nonbiasednbafan on Reddit)
NBA・7 DAYS AGO
ClutchPoints

CHARLOTTE - Jeremy Chinn opened the regular season with the chef's kiss. He donned the red Davidson College jersey of Charlotte native, NBA legend and Panthers superfan Stephen Curry on Sunday morning. After growing up in Charlotte, Curry led nearby Davidson to an Elite 8 appearance in 2008. A perennial...
NBA・11 DAYS AGO

We all knew it would happen someday but Stephen Curry is set to cakewalk his way to another NBA record in the Golden State Warriors' 2021-22 NBA season. The guy who is often credited for sparking the 3-point revolution and causing every kid to start chucking up perimeter shots before they have the strength to even do so is about to make history yet again as Curry approaches the all-time record for most career 3-pointers.
NBA・13 DAYS AGO
KTVU FOX 2

OAKLAND, Calif. - A colorful bus filled with healthy food and books is headed to Oakland, thanks to Stephen and Ayesha Curry. Over the next year, the "bus for books, food, and play" will bring 50,000 meals from more than 25 Oakland restaurants to families in the area. It will...
NBA・14 DAYS AGO
The Hollywood Reporter

Stephen Curry and Erick Peyton’s Unanimous Media will team with Netflix for a feature adaption of Jewell Parker Rhodes’ YA sports novel Black Brother, Black Brother. The story, according to the film’s synopsis, follows “12-year-old Donte, who wishes he were more like his popular, lighter-skinned brother, Trey. After being framed by the school bully, and school fencing captain, for something he didn’t do, Donte joins a local youth center and meets disgraced, former Olympic fencer, Arden Jones. With Arden’s help, he starts training as a competitive fencer, setting his sights on taking down his nemesis.” Rhodes’ book was a part of Curry’s...
TV & VIDEOS・14 DAYS AGO
Bleacher Report

Golden State Warriors superstar and two-time MVP Stephen Curry will be covering the Ryder Cup later this month as part of a "global talent partnership" between Comcast NBCUniversal and Curry's Unanimous Media, per The Athletic. "Our goal at Unanimous has always been to create content that is not only entertaining,...
NBA・9 DAYS AGO
ClutchPoints

One of the most, if not the most feared players to guard in the NBA today is Golden State Warriors superstar Stephen Curry. If you are stuck defending him one-on-one and even when doubling him, beware because you can get completely embarrassed. Here are the four times Curry embarrassed his...
NBA・13 DAYS AGO
Cartoon Brew

Unanimous Media, the production company co-founded by NBA basketball star Stephen Curry (top, left) has signed a multi-year first-look development deal with DreamWorks Animation for kids and family content. The animation deal is part of a broader agreement with Comcast NBCUniversal in which Unanimous, whose other founder is Erick Peyton...
NBA・9 DAYS AGO
TheWrap

Stephen Curry and Erick Peyton on behalf of their Unanimous Media have signed a multiplatform deal with Comcast NBCUniversal, the company announced Tuesday. The multi-year agreement will include first-look development deals for Universal Studio Group and scripted and unscripted television projects and another for DreamWorks Animation for kids and family content.
BASKETBALL・9 DAYS AGO
KGO

SAN FRANCISCO (KGO) -- After a year hiatus due to the pandemic, a prominent charity golf event was back in the Bay Area. Stephen and Ayesha Curry hosted the Workday Charity Classic benefitting the Eat. Learn. Play. Foundation. "We're here to have some fun, all while raising some money hopefully...
SAN FRANCISCO, CA・11 DAYS AGO