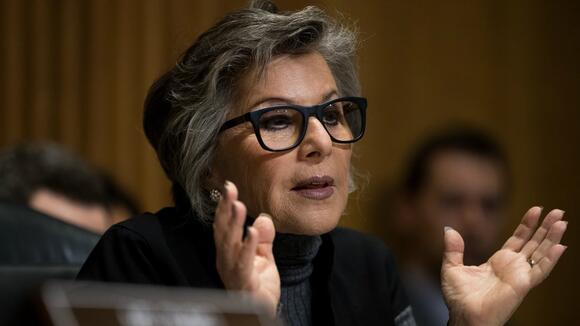 Former Sen. Barbara Boxer (D-Calif.) was attacked in Oakland, Calif., on Monday but not seriously injured, according to a statement on her official Twitter account.

Boxer, 80, was allegedly pushed in the back by an assailant who stole her cellphone before jumping into a waiting car, according to her statement.

The Oakland Police Department told The Hill that a victim was walking in the 300 block of 3rd Street at 1:15 p.m. when they were “approached by a suspect” who “forcefully took loss from the victim, and fled in a nearby waiting vehicle.”

The department, which did not identify the victim, said the incident is being investigated by the Oakland Police Department’s robbery section.

Authorities are offering up to $2,000 in reward money for information that leads to an arrest in the case.

The statement posted to Boxer’s Twitter account said the former senator is “thankful that she was not seriously injured.”

The incident reportedly took place in Jack London Square, a historic waterfront neighborhood of Oakland, according to Boxer’s statement.

Boxer represented California in Congress from 1983 until 2017, first in the House before being elected to the Senate in 1992.

She announced in January 2015 that she would not run for reelection. She said she would continue working on “the issues that I love” through her political action committee, PAC for a Change, CNN reported at the time.

“I am never going to retire,” Boxer said, according to the network. “The work is too important.”

This is what it will take for all white liberals to wake up. The hateful black thugs see you as a target. How about the decent blacks start condemning these thugs the same way whites hate meth junkies.

It's probably Black Loot. Murders. Dumiecrats fund them and VOTE to defund police so let them live with this mess they created.

She should have been severely injured. Boxer and her ilk are completely responsible for the deterioration of law and order in California. But liberals are ideological and even if Boxer was murdered, it wouldn’t wake them up to the reality of what they have done to create the problem.

BERLIN, Sept 26 (Reuters) - Germany's Social Democrats narrowly won Sunday's national election, projected results showed, and claimed a "clear mandate" to lead a government for the first time since 2005 and to end 16 years of conservative-led rule under Angela Merkel. The centre-left Social Democrats (SPD) were on track...
PRESIDENTIAL ELECTION・16 HOURS AGO
The Hill

States are bracing for confusion as the Biden administration begins rolling out booster doses of Pfizer's COVID-19 vaccine. Chaotic and at times disparate messaging from administration health officials over the past month has culminated in a complicated set of recommendations about who should be getting booster shots, and why. A...
INDUSTRY・14 HOURS AGO
The Hill

The National Transportation Safety Board (NTSB) will be investigating the fatal passenger train derailment in Montana on Saturday. At least three people were killed and dozens others injured when seven cars on an Amtrak train traveling from Seattle to Chicago derailed near Joplin, Mont. Local officials said the number of...
TRAFFIC・15 HOURS AGO
CBS News

New York City schools have been temporarily blocked from enforcing a COVID-19 vaccine mandate for its teachers and other workers by a federal appeals judge just days before it was to take effect. The worker mandate for the the nation's largest school system was set to go into effect Monday....
NEW YORK CITY, NY・1 DAY AGO

Debate on a bipartisan infrastructure bill will begin in the House on Monday and go to the floor for a vote three days later, House Speaker Nancy Pelosi said Sunday. In a letter to House Democrats, Pelosi said the vote will come on the same day the nation’s surface transportation act — which authorizes spending on highways, bridges and other infrastructure projects — expires.
PRESIDENTIAL ELECTION・1 HOUR AGO
ABC News

Four bodies were hung in the heart of the Afghan city of Herat in a grim sign that the Taliban are reinstating its hard-line rule even as they are trying to project a more moderate image. Mulwi Shir Ahmad Ammar, the city's deputy governor, said the four men had kidnapped...
WORLD・14 HOURS AGO
CBS News

A U.S-Mexico border crossing in Texas is partially reopening on Saturday, U.S. Customs and Border Patrol announced. The Del Rio Port of Entry had been closed for several days as U.S. officials cleared a nearby migrant encampment that had grown to include nearly 15,000 people, many of them Haitian migrants.
TEXAS STATE・1 DAY AGO

“Dear Evan Hansen” may have been a hit on Broadway, but the filmed adaptation of the Tony-winning show is off to a slow start at the box office in its first weekend in theaters. The Universal musical that’s playing exclusively in theaters grossed an estimated $7.5 million from 3,364 locations, according to studio estimates on Sunday.
MOVIES・10 HOURS AGO
Fox News

Former President Trump returned to Georgia this weekend, to amplify his attacks on the key battleground state’s top elected Republican leaders and to showcase a trio of candidates loyal to the former president. For Trump, the trip to Georgia was personal – it came as he’s still trying to overturn...
GEORGIA STATE・11 HOURS AGO