Hair braiders can now work without a license in Wisconsin 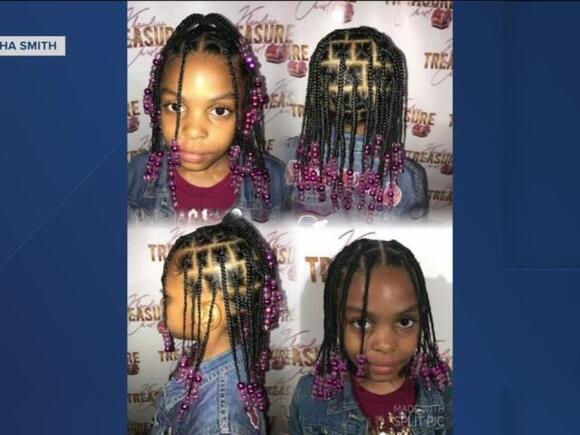 Lawmakers celebrated at the State Capitol Monday as Wisconsin joined several other states not requiring a license to braid hair.

The bi-partisan bill states that a person does not need to get a barbering or cosmetology license to perform natural hair braiding. It was signed into law by Gov. Tony Evers earlier this month.

Khandie's Treasure Chest owner Natasha Smith said she's been doing hair since she was 11 years old, and braiding comes naturally for her.

"Once you know the basics of it, all you have to do is apply what you're looking at and go for it," Smith said.

Following the news, she just couldn't contain her emotions.

"Overjoyed!" Smith said. "I can't believe it, I don't know what made them come to this decision, but whatever it was, thank you!"

Smith is a self-taught hair braider and decided to attend beauty school to enhance her skills.

"I went to Empire School, and I stopped going because I was spending so much money on tuition," Smith said.

State Rep. Sheila Stubbs said the passage of this bi-partisan bill will positively impact those trying to make a living, and create new opportunities.

"This bill will create more jobs for more people in the state of Wisconsin, and we will have less people doing hair from their home," Stubbs said.

With this bill, Smith can now practice braiding anywhere in the state.

Smith can use her skills to not only make someone feel amazing about themselves, but also to provide for her family.

"If I get into any kind of money situation, hair always gets me out. God always sends somebody to me that wants their hair done," Smith said.

Her work speaks for itself, and now she hopes to capitalize on this opportunity.

Third Friday of September: A major day for Wisconsin schools and tax dollars

A major day for Wisconsin schools and your tax dollars happens on Friday, the third Friday of September.
WISCONSIN STATE・1 DAY AGO
TMJ4 News

Barnes paid no income tax, was on BadgerCare in 2018

Since 2016, the Wisconsin Department of Justice has kept a list of officers who have been fired for cause, or quit in the middle of an investigation or in lieu of termination, commonly referred to as the "flagged officers" list.
WISCONSIN STATE・2 DAYS AGO
TMJ4 News

Timeline of Evers' response to Kenosha violence after Blake shooting

As Gov. Tony Evers seeks re-election, he is facing criticism for his response to the Kenosha unrest after the Jacob Blake shooting.
KENOSHA, WI・1 DAY AGO

All employees at the Wisconsin Center District will have to be completely vaccinated against COVID-19 by Nov. 1, the district's CEO announced at a board meeting Friday.
WISCONSIN STATE・1 DAY AGO
TMJ4 News

A three-judge panel of federal judges has denied a request by the Republican-controlled Wisconsin Legislature to dismiss a redistricting lawsuit brought by Democrats.
WISCONSIN STATE・2 DAYS AGO
TMJ4 News

A judge has rejected a request by Republican legislators and a hunting group to join a lawsuit seeking to remove the Wisconsin Department of Natural Resources board's chairman from his post.
MADISON, WI・3 DAYS AGO

Proposal aims to hire first paid interns for the Milwaukee Co. Board of Supervisors

A suspect in the shooting deaths of four Minnesotans who were found in an abandoned SUV in Wisconsin has surrendered to authorities in Arizona.
ARIZONA STATE・1 DAY AGO
TMJ4 News

The new PAC will be able to raise an unlimited amount of money to help Kleefisch.
MADISON, WI・2 DAYS AGO
TMJ4 News

Longtime lobbyist Bill McCoshen says he will not seek the Republican nomination for Wisconsin governor.
WISCONSIN STATE・3 DAYS AGO

Phillips declined to provide more details on the births, including whether the babies were born on base or at a local hospital.
FORT MCCOY, WI・1 DAY AGO
TMJ4 News

Jefferson Co. officials say school districts are being 'reckless' for not mandating masks

Positive COVID-19 cases are on the rise in Jefferson County, and health officials say schools are the main reason they're seeing this increase.
JEFFERSON COUNTY, WI・2 DAYS AGO
TMJ4 News

The City of Milwaukee has accepted a proposal that calls for the restoration of the former Schlitz tied-house, which was home to a series of music venues over the years.
MILWAUKEE, WI・2 DAYS AGO
TMJ4 News

A new law is being considered that could determine what can and can't be called "milk."
ALLENTON, WI・2 DAYS AGO
TMJ4 News

Residents of the city can pick up masks at local fire stations.
RACINE, WI・3 DAYS AGO
TMJ4 News

Say goodbye to the plastic bones and skulls in your science classroom and hello to virtual cadavers. Well, that's at least what some students at Wauwatosa West High School are saying.
TECHNOLOGY・3 DAYS AGO