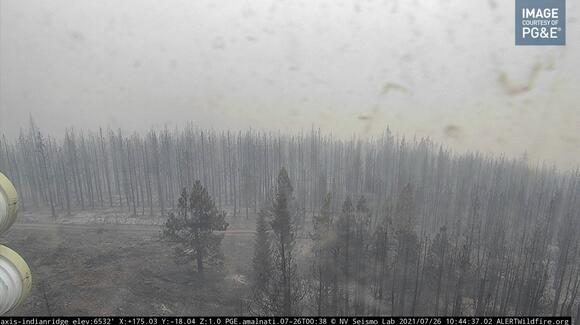 BUTTE COUNTY, Calif. (KION) Last week a rockslide caused by the Dixie Fire was caught on camera . This week, a timelapse video caught the fire burning through the trees into the camera pointed at the scene.

After nearly two weeks, the fire burning north of Sacramento is 21% contained. It's one of more than 80 fires currently burning in 11 western states, forcing nearly 8,400 evacuations. At least 21 structures have been lost since the fire was sparked on July 13 .

The fire has burned 190 thousand acres. No deaths or injuries were reported.

nsported to a local hospital after being ejected from a vehicle involved in a rollover crash in the Marina area. The post Passenger in rollover crash dies, driver arrested for felony DUI appeared first on KION546.
MARINA, CA・3 DAYS AGO
KION News Channel 5/46

A swimmer is swept off the rocks at Panther State Beach

DAVENPORT, Calif. (KION) UPDATE Sept. 9, 2021 -- Cal Fire CZU reports that multiple agencies were able to locate a body at 5:50 p.m. but they couldn't reach the swimmer until the tide receded to retrieve the victim. Before 4 p.m. on Tuesday, there were multiple 911 calls about a...
DAVENPORT, CA・6 DAYS AGO

SALINAS, Calif. (KION-TV) -- More than $1 million dollars worth of illegal drugs are now off the streets in Monterey County, thanks to a multi-agency effort led by the Salinas Police Department. Police say the bust is in connection to a trucking company registered out of Salinas, Nor Cal Transportation,...
SALINAS, CA・4 DAYS AGO
KION News Channel 5/46

Santa Cruz Police alongside US Marshals attempting to apprehend suspect

Cal Fire responds to a vegetation fire in Carmel Valley

SEASIDE, Calif. (KION) On Saturday morning, the Seaside Police Department held an event observing the 20th anniversary of the September 11th attacks. Several county and city officials such as Supervisor Wendy Askew and Seaside Mayor Ian Ogelsby were present at the event. A somber moment of silence marked the exact...
SEASIDE, CA・9 DAYS AGO

SANTA CRUZ COUNTY, Calif. (KION-TV) -- The final defendants from a 2014 double-homicide in Watsonville have entered guilty pleas for their role in a shooting that left a 4-year-old girl dead. Marcos Robles has plead guilty to two counts of first-degree murder, firearms enhancements, gang allegations and felony assault for his role in the murder The post Santa Cruz D.A. announces additional convictions in 2014 double-homicide that left 4-year-old girl dead appeared first on KION546.
WATSONVILLE, CA・10 DAYS AGO
KION News Channel 5/46

Heroes of 9/11: Jack Grandcolas reflects on the loss of his wife and unborn child

PEBBLE BEACH, Calif. (KION & AP) For the first time since 2003, Jack Grandcolas has traveled to the Flight 93 National Memorial in Pennsylvania to mark the 20th anniversary of the September 11th attacks, and the death of his pregnant wife, Lauren Grandcolas. "Every year it's a gut punch. There's...
SOCIETY・10 DAYS AGO
KION News Channel 5/46

Man arrested for allegedly killing ex-girlfriend in 2002 in Salinas

SALINAS, Calif. (KION-TV) -- It has been almost 20 years since Loretta Paluszynski was found stabbed to death in her Salinas home. Police say this week they were finally able to track down and arrest the suspect. 46-year-old Juan Gabriel Nunez was extradited to the U.S. on September 8th and...
SALINAS, CA・11 DAYS AGO
KION News Channel 5/46

SALINAS, Calif. (KION) Many of us can remember where we were and what we were doing when we heard or saw images of planes crashing into the World Trade Center, the Pentagon, and a field in Pennsylvania. Twenty years later, generations of Central Coast residents can still remember the impacts...
SALINAS, CA・11 DAYS AGO
KION News Channel 5/46

Man killed in Gilroy officer-involved shooting has been identified