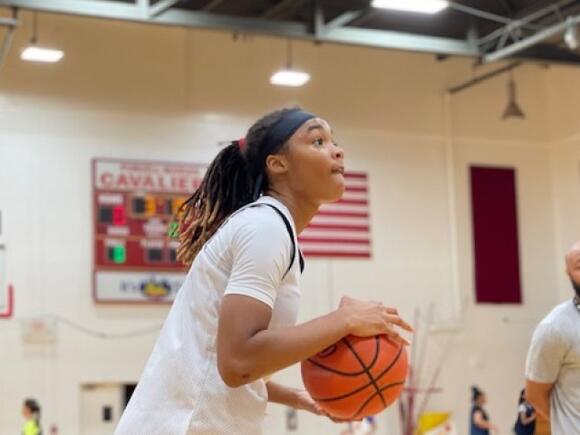 "I think she's one of those kids that you'll get lucky to see once in a lifetime," Purcell Marian girls basketball coach Jamar Mosley said. "Like, she's a once-in-a-lifetime type kid. People always ask me if she's the best player that I've coached so far. I'm like, 'Talent-wise, she is probably going to be the best that I ever coach.'"

Johnson estimates he's coached about 100 NCAA Division I players in his 15 years of coaching. Alexander is on an elite list.

"There are different types of players, obviously, but I've never seen anybody at that age be as dominant besides (former Princeton High School All-American) Kelsey Mitchell, " Johnson said. "Now, her and Kelsey are two different style of players, but that's how dominant she is."

Alexander's talent is obvious, but her unselfish, team-focused mentality is equally impressive.

"She's the most special kid I've ever had and probably that I'm ever going to have," Johnson said. "She is the No. 1 player in that class, and that's for a reason. She can score the ball in a variety of ways. She passes the ball really well. She defends. She's long. She's special."

Despite all the attention, Alexander has kept her focus on the ways she can improve on the court and get stronger in by utilizing the weight room.

She has gained the confidence to the shoot the ball more and wants to continue to improve in every aspect of the game.

"I just love everything about it," Alexander said. "I grew up watching videos on basketball and most of the time when I watched it, that's how I learned the new stuff that I know now."

Alexander, who lives in Hartwell, has played basketball since she was six or seven years old.

Alexander's desire to succeed is evident in life.

Alexander has a maturity beyond her years, Mosley said.

That was the case in June when Purcell Marian trailed Pickerington Central by 17 points during a summer competition. The Tigers were physical with a focus on Alexander, but she didn't back down and moved onto the next play.

"She has a target on her back," Mosley said. "People are like, 'Who is this girl?' She's playing three grade levels up. She just had 22 points the last game. She's out here passing the ball like she's played forever. So people kind of put a target on her back, and she allows nothing to rattle her."

That poise will be important this winter for a Purcell Marian team that was a Division III state semifinalist in March. Alexander is one of six freshmen who will likely play this season.

"My team — I really like them a lot," Alexander said. "We get along. Most of us knew each other from like AAU playing together or knowing each other from the same teams.

"It's a bunch of young girls on the team so we will be playing with each other for a while and our chemistry that we have as of right now is actually very good so I feel like going into the season it will be a good year."

Our "Game of the Week" this Friday was a GCL-South showdown between Elder and St. Xavier. The Bombers once again proved they belong at the top of the Ohio high school football rankings. St. Xavier beat Elder 52-14 after scoring 38 unanswered points to close-out the game.
HIGH SCHOOL・1 DAY AGO
WCPO 9 Cincinnati

The Beechwood football program enjoyed its first win over CovCath since 2014. Plus, catching up with former NFL player DeShawn Wynn and inside the college recruiting of Walnut Hill basketball standout Tyler McKinley.
WYOMING, OH・4 DAYS AGO
WCPO 9 Cincinnati

Rose Lavelle graduated from Mount Notre Dame High School in 2013. She is now a player on the United States women's national soccer team. The national team is facing Paraguay in a friendly match Tuesday night at TQL Stadium.
CINCINNATI, OH・4 DAYS AGO

The football season is back on at Western Hills and Dater High School, where practice and games were suspended after video of an alleged hazing incident circulated online, but former head coach Armand Tatum won’t be on the sidelines.
CINCINNATI, OH・9 DAYS AGO
WCPO 9 Cincinnati