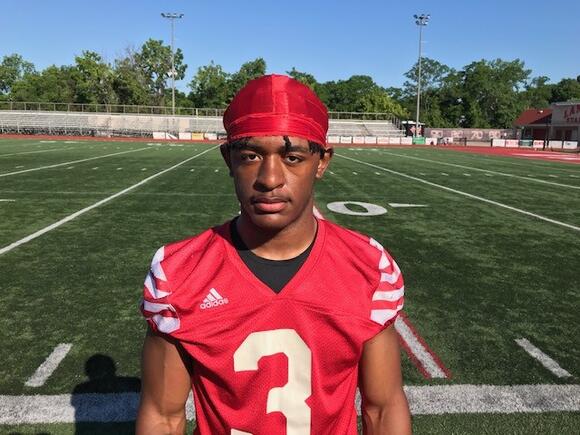 "I already knew before the visit (Sunday) that IU was home but after the visit it was a done deal," Payne told WCPO. "That place is amazing. I love all the coaches and told them I would love to be a part of this system because it's going to be special and they said, 'Let's rock' so I took it in my hands from there and made it happen."

Payne, who is listed at 5 feet 10 and 205 pounds, has fully recovered from an injury at the end of the 2020 football season.

"What I'm looking forward to the most is playing a full season," Payne told WCPO earlier this summer. "Hopefully if we make it to the state championship - play all 16 games. And stay healthy really. That's my biggest goal."

Payne, who is an excellent student, had an memorable track season and was part of the Lancers' Division I state champion 400-meter relay team this spring.

"He looks fresh; he's running fast," La Salle football coach Pat McLaughlin said. "He's really becoming more of a vocal leader. We're excited to have him on offense and defense and special teams and have a big year for us."

Payne helped to lead the Lancers to the Division II state title in 2019.

Payne rushed for 790 yards and nine touchdowns and caught eight passes for 141 yards and three touchdowns in 13 games in 2019. As a linebacker, he had 41 tackles (28 solo) including four sacks.

The Lancers (8-3 in 2020) were a Division II state semifinalist last season and return several key players.

Hamilton celebrates West Side players with days of their own

With COVID-19 protocols in place, it was the West Side Little League players who took the field in the seats usually occupied by Hamilton City Council.
HAMILTON, OH・1 DAY AGO
WCPO 9 Cincinnati

The Beechwood football program enjoyed its first win over CovCath since 2014. Plus, catching up with former NFL player DeShawn Wynn and inside the college recruiting of Walnut Hill basketball standout Tyler McKinley.
WYOMING, OH・4 DAYS AGO
WCPO 9 Cincinnati

Rose Lavelle graduated from Mount Notre Dame High School in 2013. She is now a player on the United States women's national soccer team. The national team is facing Paraguay in a friendly match Tuesday night at TQL Stadium.
CINCINNATI, OH・4 DAYS AGO

No. 8 Bearcats take big step, next one looms at Notre Dame

In two weeks, the Bearcats could have another breakthrough moment at No. 12 Notre Dame as they aim to break up the Power Five’s monopoly on College Football Playoff bids.
CINCINNATI, OH・6 DAYS AGO
WCPO 9 Cincinnati

The football season is back on at Western Hills and Dater High School, where practice and games were suspended after video of an alleged hazing incident circulated online, but former head coach Armand Tatum won’t be on the sidelines.
CINCINNATI, OH・9 DAYS AGO