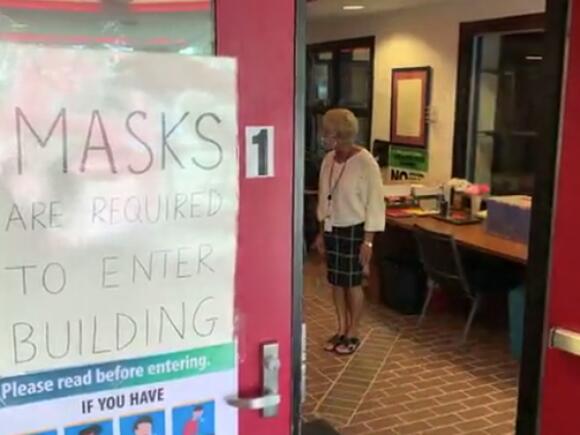 In a statement, the Democratic governor said the state funding would be matched with another $250 million in local funds for an investment that would allow for the completion of nearly all Virginia school divisions' currently planned projects.

“This investment will help families, educators, and students feel more confident about the quality of the air they breathe as we return to in-person learning five days a week this fall," Northam said.

The governor, alongside Democratic legislative leaders, has slowly been rolling out his proposals for how to divvy up the state’s $4.3 billion portion of American Rescue Plan funding. Lawmakers will meet next month for a special session to allocate the money.

Northam has previously called for investing $700 million to expand broadband infrastructure and $353 million in relief for small businesses and hard-hit industries like tourism.

Under Monday's proposal, the state’s portion of the air quality project funding would be allocated based on school divisions' average daily membership, his office said in a news release.

More spending proposals are expected to be unveiled this week.

The Supreme Court of Virginia has rejected a legal challenge to a state law that changes how prison inmates are counted for purposes of redistricting.
VIRGINIA STATE・10 HOURS AGO
WTVR CBS 6

Stafford Supervisors voted to denounce the teaching of The 1619 Project and critical race theory in county schools and condemned requiring students to choose their own pronouns.
10 HOURS AGO
WTVR CBS 6

Virginia's State Corporation Commission staff has testified that Dominion Energy earned more than $1.1 billion above a fair profit from its in-state customers in four years.
VIRGINIA STATE・2 DAYS AGO

Emancipation and Freedom Monument in Richmond

A Circuit Court judge in Emporia has denied a motion to move a lawsuit against the Commonwealth over a ban of skill games.
VIRGINIA STATE・2 DAYS AGO
WTVR CBS 6

Emancipation monument to be unveiled at Brown's Island

A new emancipation monument dedicated to those who fought for freedom is being unveiled at Brown's Island Wednesday morning.
RICHMOND, VA・1 DAY AGO

Dr. Shadae Harris, Richmond Schools' Chief Engagement Officer, said that the school district is reaching out to families to learn why their kids aren't showing up to school and offering solutions when possible.
RICHMOND, VA・2 DAYS AGO
WTVR CBS 6

VEC could have 1M unemployment claim issues to settle

Kayak repair shop draws customers from all across the map

A Virginia couple is drawing customers from across the map who are looking to get their boats fixed by their trusted hands.
NEW KENT COUNTY, VA・20 HOURS AGO

Virginia Voter Guide to the 2021 Election

On November 2, voters across the Commonwealth will decide the next Governor, the balance of power in the oldest governing body in North America, and whether or not Richmond will build a casino-resort.
VIRGINIA STATE・3 DAYS AGO
WTVR CBS 6

The conversation featured medical professionals and community advocates who hope to get to the heart of the issue and figure out a way to improve vaccination rates among African Americans.
PUBLIC HEALTH・1 DAY AGO
WTVR CBS 6

Healthcare workers are saying that Virginia's healthcare system is stretched thin, taking a toll on those working to keep people healthy.
VIRGINIA STATE・2 DAYS AGO

Schools across Virginia will soon administer additional testing to assess how students in grades 3 through 8 are doing in math and reading after two turbulent school years.
VIRGINIA STATE・4 DAYS AGO
WTVR CBS 6

A new TikTok trend that has students across the country vandalizing and damaging school property has made its way to Central Virginia.
RICHMOND, VA・2 DAYS AGO
WTVR CBS 6

A Virginia mother is hospitalized at the VCU Burn Unit in Richmond with severe burns after she caught fire at her family's brewery.
VIRGINIA STATE・1 DAY AGO
WTVR CBS 6

People say a controlled burn in Colonial Heights has damaged their homes and cars, covering everything in ash.
COLONIAL HEIGHTS, VA・2 DAYS AGO