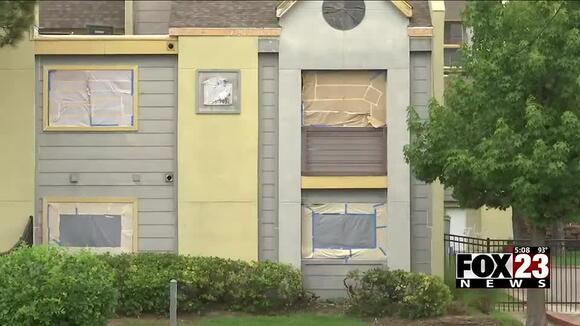 TULSA, Okla. (KOKI) — Now former residents of a south Tulsa apartment complex are fighting for justice after being forced to move.

Documents state, “the greedy unethical landlord of Vista must be held accountable.”

The residents call the complex out on unsafe and unsanitary living conditions.

The lawsuit says maintenance was deferred, utility bills went unpaid and residents were forced to live in unsafe conditions while “collecting rent and payments from Section 8 vouchers.”

The lawyer representing the residents, Frederic Dorwart, says they believe there is a clear violation of people’s rights.

Eric Hallett with Housing Advocacy of Legal Aid Services says residents were forced out illegally and that he is encouraging them to seek justice.

Lawyers are going after $10,000 for residents after forcefully having to move and uproot their lives.

TULSA, Okla. (KOKI) — A federal jury has convicted Devon Blevins, 28, also known as “Osage,” for the fatal shooting of a man on a bike earlier this year. A federal affidavit reveals that on April 12, 2021, Blevins shot and killed Maurice Burgess, 36, to impress members of the Savage Boys street gang and to help his admission to the gang.
TULSA, OK・10 HOURS AGO
FOX 23 Tulsa KOKI

What the Gabby Petito story means for survivors of domestic violence

TULSA, Okla. — “If you are abused for so long, you start thinking you can’t do any better. This is as good as it’s going to get,” said Sophia Gomez, a domestic violence survivor. For Gomez, the abuse came to a head when her partner tried to kill her. “I...
TULSA, OK・7 HOURS AGO
FOX 23 Tulsa KOKI

NORTH PORT, Fla. — (AP) — Gabby Petito was killed by another person, a coroner concluded while also confirming that the human remains found recently at a Wyoming national park were those of the 22-year-old woman who disappeared months after she set out on a cross-country road trip with her boyfriend, the FBI said Tuesday.
NORTH PORT, FL・13 HOURS AGO
FOX 23 Tulsa KOKI

The Latest: Wyoming'sgov. sends Guard to help at hospitals

CHEYENNE, Wyo. — Wyoming’s governor has activated the Wyoming National Guard to provide temporary assistance to hospitals that are dealing with a surge of patients with COVID-19. Gov. Mark Gordon activated 95 soldiers and airmen Tuesday to serve at 24 sites in 17 Wyoming cities. The Guard members will help...
WYOMING STATE・15 HOURS AGO
FOX 23 Tulsa KOKI

Firefighters respond to fire at trailer park in north Tulsa

TULSA, Okla. — Tulsa firefighters are on scene of a trailer park fire in north Tulsa. Firefighters received a call that a trailer home was on fire around 4:40 p.m. near 5800 East 36th Street North. Nearby neighbors tell FOX23 News that they heard an explosion when the fire happened.
TULSA, OK・13 HOURS AGO