The Black Hole: Go Inside the Las Vegas Raiders 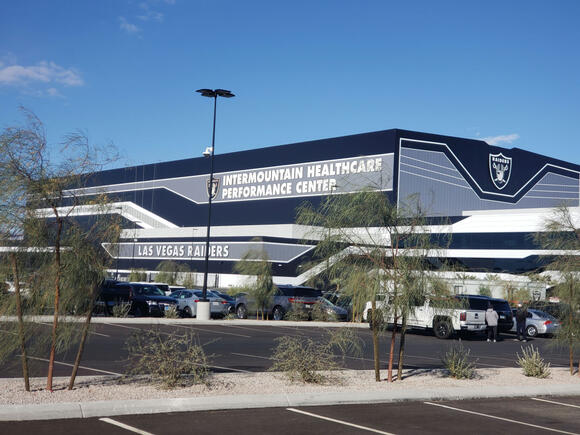 Henderson, Nev.--People are hungry for information on their beloved Las Vegas Raiders, and I am here with a smorgasbord of food. Let's dig right into the latest on your beloved Silver and Black.

I get a lot of nuggets and information that alone are not big enough for a story. When I have a few that I can assemble, I will. So, welcome to The Black Hole:

I can tell you this: Raider Nation has a ton to be excited about. This article is already long, or I could give you many more reasons and players to be excited about. Keep your eyes out for the next "Black Hole," and please tell your friends about it by sharing it on social media.

Want the latest breaking Las Vegas Raiders news delivered straight to your email for FREE? Sign up for the DAILY Raiders Nation newsletter when you CLICK THE FOLLOW button on the main page. Don't miss any of the latest up to the second updates for your Las Vegas Raiders when you follow on Twitter @HondoCarpenter

A notable wide receiver is officially on the open market this Tuesday. In a surprising turn of events, the Las Vegas Raiders have released John Brown. According to NFL Network insider Tom Pelissero, the Raiders actually released Brown because that was his request. It’s unclear what went on behind the scenes in Las Vegas.
NFL・17 DAYS AGO
saturdaydownsouth.com

BJ Emmons’ time with the Las Vegas Raiders appears to be done. The former Alabama running back was let go Monday in a series of roster moves by the Raiders. Emmons was cut from the team’s active roster last week. He was quickly re-signed to the team’s practice squad. The Monday roster move is Emmons’ release from the Las Vegas practice squad.
NFL・11 DAYS AGO
The Spun

The Las Vegas Raiders are reportedly adding a veteran running back to their roster of Friday. According to Washington Football Team insider Nicki Jhabvala, the Raiders are poaching sixth-year NFL pro Peyton Barber off the WFT practice squad. In 2020, Barber served as a third-string running back option for Washington,...
NFL・14 DAYS AGO
ClutchPoints

■ Sunday — Off ■ Monday — vs. Ravens, Allegiant Stadium, 5:15 p.m. Raiders linebacker Cory Littleton is ready to move on from last year. Not only did he struggle in his transition from the Rams to the Raiders and a new system, he didn’t get the same enjoyment out of the game playing in front of limited- and even zero-capacity stadiums.
NFL・10 DAYS AGO
The Baltimore Sun

Coming off a game in which the Ravens allowed the highest pressure rate in the NFL, Ravens offensive coordinator Greg Roman said Thursday there are things his offensive line must “clean up” heading into Sunday night’s matchup with the Kansas City Chiefs. Against the Raiders, quarterback Lamar Jackson was constantly under duress from Las Vegas’ pass rush. Jackson was pressured on 54.5% of his ...
NFL・1 DAY AGO
USA TODAY Sports Media Group

If there is one NFL coach who was going to keep the fullback position alive and well in 2021, you can likely guess it would be Las Vegas Raiders head coach Jon Gruden. Gruden found his franchise fullback from FBU at Wisconsin in Alec Ingold. The Green Bay native has turned into arguably the best FB in the league, and has spent the past two seasons with the Raiders. He finished last season with a receiving touchdown and an entire highlight tape full of blocks that led to impressive runs for Raider RB’s.
NFL・14 DAYS AGO
102.5 WDVE

The Las Vegas Raiders have added a former Auburn standout to the Alabama group in their running-backs room. The Raiders are signing Peyton Barber off the Washington Football Team’s practice squad, NFL Network reported on Friday. Washington released Barber on Tuesday as it reduced its preseason roster to the regular-season...
NFL・14 DAYS AGO
Sportsnaut

Las Vegas Raiders: 3 new starters on defense to be excited about in 2021

The Las Vegas Raiders did a nice job revamping the defense this offseason, and here are three new starters to get excited about. The Las Vegas Raiders will kick off their 2021 NFL season in eight days, as they welcome perennial playoff contender Baltimore to Allegiant Stadium. The game will be the first in front of fans for the Raiders in the regular season, and it is going to be an excellent test for the new-look defense.
NFL・12 DAYS AGO
FanSided

We are mere days away from the 2021 Raiders campaign beginning, and it’s about time to take a look at their opponents for Week 1 in the Baltimore Ravens. One thing that Lamar Jackson and the Ravens are probably the best at is frontrunning, and early season games are where Lamar likes to get out to big starts. In 2021, he kicks off his season against the Las Vegas Raiders, who may not be as easy a task as one may think.
NFL・11 DAYS AGO

The Las Vegas Raiders have an above-average quarterback in Derek Carr, who will exceed expectations in 2021 in more ways than one. The Las Vegas Raiders will kick off their 2021 regular season inside Allegiant Stadium on Monday night, as they welcome a perennial playoff team in the Baltimore Ravens. Derek Carr and company will look to get their season off on the right foot, but playing against a Ravens defense that should be excellent again this season could be a tough task in week 1.
NFL・9 DAYS AGO
Sportsnaut

Baltimore Ravens vs Las Vegas Raiders prediction, game preview, and fantasy player to watch. The Baltimore defensive front is about to have a day. Las Vegas has tried to build itself into a tough, hard-nosed team under Jon Gruden, but with the flash of the downfield passing game that makes the Raiders the Raiders. However, the offensive line is building itself up back up to try getting more physical for a ground game that died for a long stretch over the second half of the season.
NFL・11 DAYS AGO
FanSided

Will Allegiant become a decided advantage for the Las Vegas Raiders?

The Las Vegas Raiders will be welcoming Raider Nation back into the stadium in 2021, but will it be a dependable x-factor during the regular season?. In their last game inside the Oakland Coliseum, the then-Oakland Raiders lost to the Jacksonville Jaguars, a team they had no business losing to. That led to an almost uprising by the fan base, as they littered the field with garbage, and booed the Silver and Black out of the stadium.
NFL・12 DAYS AGO
chatsports.com

It’s been a long offseason, but game week is finally here! The Las Vegas Raiders will look to prove they’re a legitimate playoff contender on Monday Night, while the Baltimore Ravens are hoping to show the world that they still are one despite a handful of changes from a year ago.
NFL・9 DAYS AGO
GV Wire

Why the Las Vegas Raiders Will Win Super Bowl LVI

Let’s cut straight to the chase. On the evening of the second Sunday in February, NFL Commissioner Roger Goodell will hand the Super Bowl trophy to Jon Gruden. My pick to win it all is the Las Vegas Raiders. Not Tampa Bay, not Green Bay, not Kansas City. Those are all great teams with no glaring weaknesses led by future Hall of Fame quarterbacks.
NFL・8 DAYS AGO
FanSided

Las Vegas Raiders should be favored against Baltimore in Week 1

The hits keep coming for the Baltimore Ravens, and after a rough go on Thursday, the Las Vegas Raiders should be favored Monday night. Another day, more injuries for the Baltimore Ravens, who are preparing for their Week 1 Monday night matchup against the Las Vegas Raiders. The Ravens are already short-handed, as guys like Rashod Bateman, Miles Boykin, and J.K. Dobbins are out, and now two more of their key players are likely done for the season.
NFL・8 DAYS AGO
WSB Radio

LAS VEGAS — Raiders fever continues to swell before the team’s NFL season opener against the Baltimore Ravens. Even a sphinx is rocking the silver and black. The Great Sphinx of Giza replica, located outside the Luxor Hotel & Casino on the Las Vegas Strip, was sporting a pirate patch over one of its eyes, the Las Vegas Review-Journal reported.
GAMBLING・5 DAYS AGO