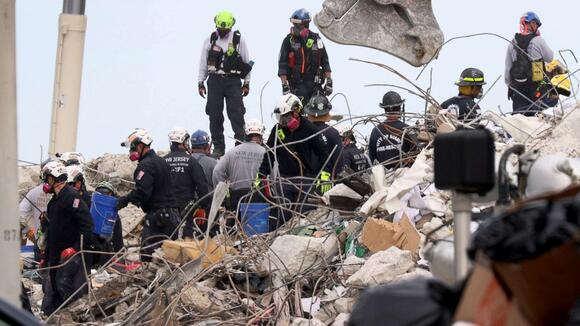 The remains of the last victim of the Surfside, Florida, condo collapse have been identified, a relative confirmed to ABC News Monday.

Estelle Hedaya, 54, was the final person to be unaccounted for. The death toll from the June 24 collapse now stands at 98.

MORE: What we know about the victims of the Surfside building collapse

Hedaya was outgoing and loved travel and fashion, according to The Associated Press.

Hedaya, a former New Yorker, moved to Florida in 2015 and lived on the building's sixth floor.

Her body will be returned to Midwood, Brooklyn, where her family lives, as early as Tuesday for her funeral. Her remains were still in the custody of the county Medical Examiner’s Office Monday afternoon, which could delay the services.

Investigators have no more missing person cases to pursue from the collapse, but will continue to search removed debris for remains.

Hallelujah 🙏🏻 now her family has closure! Condolences to all the families and friends for your losses 🙏🏻

JOPLIN, Mont. (AP) — Federal officials sent a team of investigators from the National Transportation Safety Board to the site of an Amtrak derailment in north-central Montana that killed three people and left seven hospitalized Sunday, officials said. The westbound Empire Builder was en route to Seattle from Chicago, with...
MONTANA STATE・9 HOURS AGO
The Hill

States are bracing for confusion as the Biden administration begins rolling out booster doses of Pfizer's COVID-19 vaccine. Chaotic and at times disparate messaging from administration health officials over the past month has culminated in a complicated set of recommendations about who should be getting booster shots, and why. A...
INDUSTRY・12 HOURS AGO
Reuters

New York City schools have been temporarily blocked from enforcing a COVID-19 vaccine mandate for its teachers and other workers by a federal appeals judge just days before it was to take effect. The worker mandate for the the nation's largest school system was set to go into effect Monday....
NEW YORK CITY, NY・1 DAY AGO

WASHINGTON, Sept 26 (Reuters) - U.S. Speaker of the House of Representatives Nancy Pelosi said on Sunday the chamber will vote on passage of the $1 trillion infrastructure bill on Thursday. "Tomorrow, September 27, we will begin debate on the Bipartisan Infrastructure Framework on the Floor of the House and...
CONGRESS & COURTS・51 MINUTES AGO
NBC News

Their bodies were hung in the heart of the Afghan city of Herat in a grim sign that the Taliban is reinstating its hardline rule despite trying to project a more moderate image. Mulwi Shir Ahmad Ammar, the city's deputy governor, told NBC News that the four men had kidnapped...
WORLD・12 HOURS AGO
Fox News

Former President Trump returned to Georgia this weekend, to amplify his attacks on the key battleground state’s top elected Republican leaders and to showcase a trio of candidates loyal to the former president. For Trump, the trip to Georgia was personal – it came as he’s still trying to overturn...
GEORGIA STATE・10 HOURS AGO
NBC News

The GOP's election review in Arizona is over. Its influence is just beginning, experts say.

Arizona Republicans on Friday championed the results of their extraordinary partisan election review — which again affirmed President Joe Biden’s victory in Maricopa County — and called for similar examinations around the country. “We need to do bigger audits on every election, just to make sure that everybody’s following the...
ARIZONA STATE・1 DAY AGO

Democrats urge Biden to go all in with agenda in limbo

Democrats are urging President Biden to lean way in as the party faces big divides amid a rocky stretch, with his signature legislative item at stake. The calls for Biden to act as the party’s unifier-in-chief comes as the president acknowledged that his agenda is at a “stalemate,” amid high-profile fights between not only moderates and progressives but the House and Senate over the scope of the sweeping spending package.
PRESIDENTIAL ELECTION・14 HOURS AGO