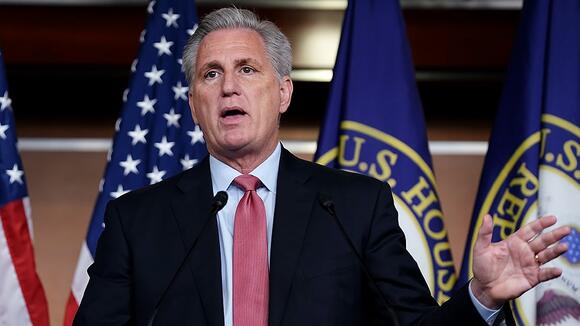 House Minority Leader Kevin McCarthy (R-Calif.) on Monday derided Reps. Liz Cheney (R-Wyo.) and Adam Kinzinger (R-Ill.) as "Pelosi Republicans" for serving on a committee to investigate the Jan. 6 attack on the Capitol.

Reporters asked McCarthy in the Rose Garden of the White House about the panel established to investigate the insurrection, specifically about Republican concerns about the lack of GOP participation on the committee. Cheney and Kinzinger are the only two Republicans on the committee. McCarthy withdrew his appointments after Speaker Nancy Pelosi (D-Calif.) blocked two of his picks.

"Who is that? Adam and Liz? Aren’t they kind of like Pelosi Republicans?" McCarthy said prior to an event to mark the anniversary of the Americans with Disabilities Act.

Speaking to another group of reporters, McCarthy again referred to the two as "Pelosi Republicans." He declined to say if he planned to somehow punish them for agreeing to take part in the investigation.

"I think that’s pretty childish," Cheney said at the Capitol when asked about McCarthy's comments.

"We’re doing big things right now. We’re getting to the answers of the worst attack on the Capitol since the War of 1812. He can call me any names he wants, Kinzinger said. "I’m a Republican. Kevin McCarthy is technically my Republican leader. And to call, you know, members of Congress by childish names like Donald Trump used to do, I guess it’s just kind of par [for the course].”

Pelosi on Sunday tapped Kinzinger, an Illinois centrist and a fierce critic of former President Trump , to sit on the Jan. 6 panel, which is set this week to launch a comprehensive look into the causes, players and security failures surrounding the siege of the Capitol by Trump supporters.

Pelosi had previously chosen Cheney as one of her designated picks for the committee. Cheney is a former member of House GOP leadership who lost that role over her consistent criticism of Trump.

Cheney and Kinzinger have been among the most outspoken critics of Trump and his continued rhetoric around the 2020 election. The former president has made false claims that the election was rigged or fraudulent for months, despite numerous lawsuits being dismissed and multiple recounts verifying the outcome.

"His goal is the same goal that Speaker Pelosi has, which is to get to the bottom of what happened and prevent it from happening in the future," Psaki said. "And he trusts her leadership to do exactly that."

--Mike Lillis contributed to this report, which was updated at 2:15 p.m.

Well that speaks volumes to their stance on that day! Their stance on our democracy, American people and the utter chaos of the Republican party.

I hope people understand that this is all a political stunt. If there is this much hostility between the Democrats and Republicans then why not go out of house. Why not allow members of other political parties; Green, Constitution, Natural Law, Libertarian, Socialist, and Reform parties; do this investigation??

That’s all they got, name calling ! No leadership, policies and nothing to help the people?

House SpeakerNancy Pelosi chided Republicans for not voting to raise the debt limit on Thursday, asking why Democrats always need to be more responsible.The House Speaker hosted Senate Majority Leader Chuck Schumer and Treasury Secretary Janet Yellen during her weekly press conference. On Tuesday, the House voted to extend the debt limit until December 2022 and keep the government open until 3 December of this year.“They voted to shut down government and not honour the full faith and credit of the United States of America,” Ms Pelosi said, noting that the bill included disaster relief for those affected by...
PRESIDENTIAL ELECTION・15 HOURS AGO
NBC News

WASHINGTON — The White House has started to tell government agencies to prepare for a potential government shutdown if a stopgap bill is not signed into law by Sept. 30. "We are taking every step we can to mitigate the impacts of a potential shutdown," said White House press secretary Jen Psaki during a briefing on Thursday.
POTUS・17 HOURS AGO
POLITICO

The House panel probing the Capitol attack is readying a wave of subpoenas and already getting results from its document requests.
DALLAS, TX・12 HOURS AGO
Fox News

As news spread Thursday that former President George W. Bush would be headlining a Texas fundraiser for U.S. Rep. Liz Cheney of Wyoming next month, subscribers to the email posts by former President Donald Trump received a "must-see" message. Inside the file, headed with the subject line "ICYMI: Must-See Photo"...
POTUS・3 HOURS AGO

Many party lawmakers have waited weeks for their president, after a summer largely focused on off-Hill crises, to turn his attention to the House.
WASHINGTON, DC・1 DAY AGO
KFOR

Pelosi Fumbles for a Path Forward

Pelosi, Dems Press for Signs of Progress on Biden Agenda. Democratic leaders appear to have a plan to try and resolve the intraparty divisions threatening to derail President Joe Biden’s economic agenda: Show enough progress on a contentious — and unfinished — $3.5 trillion spending and tax bill to ease the concerns of progressives who want to see that legislation done before voting for a $1 trillion bipartisan infrastructure package.
INCOME TAX・1 DAY AGO
NBC News

Former President George W. Bush will hold a fundraiser next month for Rep. Liz Cheney, the Wyoming Republican whom former President Donald Trump has been urging Republicans to defeat in a primary next year. Bush is scheduled to host the event for Cheney — the daughter of his former vice...
PRESIDENTIAL ELECTION・1 DAY AGO

With a personal push, President Joe Biden pressed fellow Democrats to hasten work on his big “build back better” agenda, telling them to come up with a final framework and their best topline budget figure as the party labors to bridge its divisions in Congress ahead of crucial voting deadlines.Biden and Democratic House and Senate lawmakers met for hours of back-to-back-to-back private White House sessions stretching into Wednesday evening, convened at a pivotal juncture for Biden's $3.5 trillion package as lawmakers struggle to draft details of the ambitious effort. With Republicans solidly opposed, Democratic leaders are counting on the...
PRESIDENTIAL ELECTION・1 DAY AGO
POLITICO

Fewer than a dozen Republicans are expected to back the Senate-passed bill. (For now.)
CONGRESS & COURTS・2 DAYS AGO
WashingtonExaminer

EXCLUSIVE — Ohio Republican Rep. Bob Gibbs introduced articles of impeachment against President Joe Biden on Tuesday, citing his handling of the U.S.-Mexico border situation, attempt to expand the federal moratorium on evictions, and the withdrawal of U.S. troops from Afghanistan.
CONGRESS & COURTS・2 DAYS AGO
Mario Skljoc

With so much attention on Joe Biden and the Senate these days, not many people are looking at what old Nancy Pelosi is doing. But one Republican firebrand hasn’t let the speaker off the hook.
2 DAYS AGO

Former Missouri governor Eric Greitens (R), who is running for Senate, said Tuesday that if he wins next year, he will not support Senate Minority Leader Mitch McConnell (R-Ky.) as former president Donald Trump tries to oust the GOP party leader. Since announcing in March that he will run for...
PRESIDENTIAL ELECTION・2 DAYS AGO
Markets Insider

Pelosi and Schumer said they would attach a debt-ceiling suspension to the government-funding bill. McConnell quickly struck down the idea, saying the GOP would not vote for the legislation. They effectively dared him to vote for the US to default on its debt, and he met their dare. As the...
PRESIDENTIAL ELECTION・3 DAYS AGO
Trentonian

Let me begin by indicating that I’m not a big fan of Liz Cheney and would only vote for her for the presidency if her opponent was Donald Trump. I truly believe that Donald Trump is devoid of a moral and ideological compass and has absolutely no regard for our democratic institutions or the Constitution. His desire for power has no bounds. He’s willing to exploit through racism and xenophobia the underlying anxiety that exists in our society and do whatever it takes to suppress non-white voting.
PRESIDENTIAL ELECTION・3 DAYS AGO
The Guardian

One of the seven Republican senators who voted to convict Donald Trump at his second impeachment trial warned on Sunday that the former president’s “bullying” of the party would lead to electoral defeat in next year’s midterms and beyond. Bill Cassidy of Louisiana was speaking days after the Ohio Republican...
NFL・4 DAYS AGO

"The Republican Party will not get better unless you stand up," the congressman said in a message to fellow GOP lawmakers on Saturday.
PRESIDENTIAL ELECTION・5 DAYS AGO
The Independent

Nancy Pelosi says Republican Party has been ‘hijacked by a cult’

House Speaker Nancy Pelosi has urged Republicans to “take back their party” from a “cult” of allegiance to former President Donald Trump.Ms Pelosi made the comments to an audience of students at Cambridge University in the UK on Thursday,Newsweek reported.She said: “I say to my Republican friends – and I do have some – take back your party, you’re the grand old party of America, you’ve done wonderful things for our country. You’re now being hijacked by a cult that is just not good for our country.”The House Speaker covered a wide range of topics in her speech, which she...
CONGRESS & COURTS・5 DAYS AGO
mediaite.com

Republican Congressman Anthony Gonzalez revealed to the New York Times’s Jonathan Martin that he will be retiring from Congress after this term, citing concerns over his and his family’s security from threats of violence from Trump loyalists. Martin appeared on CNN’s New Day and revealed that Reps. Cheney and Kinzinger could be next.
CONGRESS & COURTS・6 DAYS AGO
Fox News

As Democrats charge ahead with writing their massive $3.5 trillion spending bill, which they aim to pass on a party-line vote through budget reconciliation, at least one moderate Republican is warning the bipartisan infrastructure bill may lose GOP votes because it's too intertwined with the reconciliation bill. "I think Nancy...
CONGRESS & COURTS・7 DAYS AGO