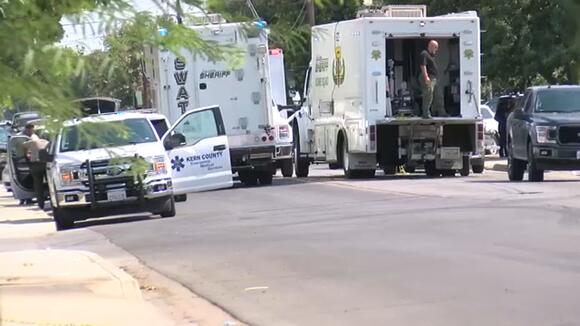 A domestic violence hostage incident in Wasco ended in the deaths of five people, including a Kern County Sheriff's deputy, during the weekend. The shooting happened during a standoff lasting several hours at a home on Sunday afternoon. The 41-year-old gunman was one of the people who died. The sheriff's office believes he killed his two sons and their mother. In an emotional press conference on Monday morning, Sheriff Donny Youngblood teared up as he identified the deputy killed as 35-year-old Phillip Campas, a five-year veteran who had already distinguished himself at the department. "When you talk about police officers that run towards gunfire, that's him," said the sheriff. Deputy Campas was a former U.S. Marine who had served as a sergeant in Afghanistan in 2008, the sheriff said. He was an instructor at the academy, as well as a member of the sheriff's SWAT team and the honor guard. He leaves behind a wife and two young children. "Our hearts are broken because of the loss of a star of our organization, but we also are mourning three other victims," Sheriff Youngblood said. The incident began when authorities received a 911 call from someone who heard screaming and shooting coming from the house. When deputies arrived, they were met by gunfire from inside the house, which injured three officers besides Deputy Campas. Deputy Dizander Guerrero was wounded by gunfire and two deputies were struck by shrapnel. The sheriff's office then called the county SWAT team for help while locking down the neighborhood, as the suspect continued to fire at law enforcement from inside the house. Hours into the standoff, the suspect came out and climbed onto the roof, armed with an AK47 and a handgun, and began shooting. Deputies shot him and he died from his injuries. The sheriff said they have learnt that the suspect had a previous restraining order against him that prohibited him from having firearms. Authorities are still looking into the identities of the victims, but they believe the suspect killed his sons, who were 24 and 17 years old, and their 42-year-old mother. Condolences poured in from law enforcement agencies across California, including the Central Valley, over the death of Deputy Campas. On Sunday night, Wasco Mayor Alex Garcia released a statement, calling the incident a tragedy. 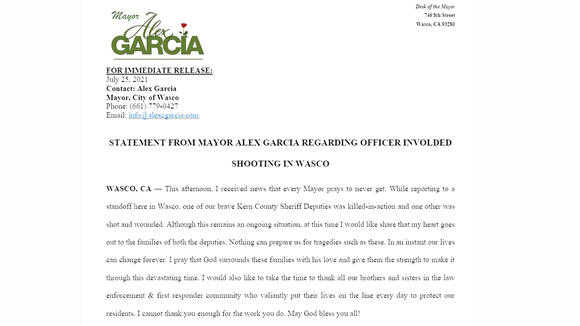 NOTE: This story is developing and will be updated. If you are the victim of domestic abuse, or you know someone who is, there is help available 24/7. In Fresno County, call the Marjaree Mason Center at (559) 233-4357. In all other locations, call the National Domestic Violence Hotline at (800) 799-7233.

FRESNO, Calif. (KFSN) -- A man is in critical condition after being shot by Fresno County deputies Monday evening. The Fresno County Sheriff's Office says it happened just before 6 pm Monday near Valentine and Belmont. Deputies were initially responding to an attempted suicide and were told the man was...
FRESNO, CA・7 HOURS AGO
ABC30 Central Valley

MERCED COUNTY, Calif. (KFSN) -- A popular bar in the small close-knit community of Hilmar is now the focus of a homicide investigation. "Everybody knows everybody in Hilmar and so for this to happen, I think it's a big shock to Hilmar itself," says Merced County Sheriff Deputy Daryl Allen.
HILMAR, CA・8 HOURS AGO

Early Sunday morning, 50-year-old Richard Harris was working at the Dino Mart at the Sinclair gas station when a person robbed the store and shot him.
TULARE COUNTY, CA・9 HOURS AGO
ABC30 Central Valley

Police say Oshae Carmeneal was found shot to death inside a home near Lamona and Delno around 1:30 am on Sunday.
13 HOURS AGO
ABC30 Central Valley

The judge ordered Gai to be arrested on Monday in court until the sentencing scheduled for October 8.
FRESNO, CA・9 HOURS AGO
ABC30 Central Valley

TULARE COUNTY, Calif. (KFSN) -- Detectives are investigating a shooting in the South Valley. Tulare County sheriff's deputies responded to calls of a robbery along Highway 99 in Goshen around 5 on Sunday morning. When deputies arrived at the crime scene near Highway 99, they found a man who had...
TULARE COUNTY, CA・1 DAY AGO

A suspected DUI crash in northeast Fresno cost a 15-year-old girl her life and resulted in life-altering injuries for two other teens in the car.
FRESNO, CA・3 HOURS AGO
ABC30 Central Valley

Action News has partnered with Valley Crime Stoppers to allow you to anonymously report tips about crime in Central California. You could also be eligible to receive a cash reward if your anonymous tip leads to an arrest.
PUBLIC SAFETY・16 HOURS AGO
ABC30 Central Valley

When officers arrived they found a man in his 30s lying on the sidewalk with several gunshot wounds.
FRESNO, CA・2 DAYS AGO
ABC30 Central Valley

Man arrested for punching Visalia police officer in the face

When the Visalia police officer got out of his car, 32-year-old Rhys Enloe allegedly ran up and punched him in the face.
VISALIA, CA・2 DAYS AGO

Fresno police now say there could be some gang ties connected to the violence.
FRESNO, CA・2 DAYS AGO
ABC30 Central Valley

The Fresno County Sheriff's Office says the boy told other students he had a gun in his backpack and was planning to shoot a teacher.
KINGSBURG, CA・3 DAYS AGO
ABC30 Central Valley

TULARE COUNTY, Calif. (KFSN) -- The Tulare County Sheriff's Office on Saturday issued fresh evacuation orders for some communities near the Windy Fire in Sequoia National Forest. The communities of Ponderosa and Quaking Aspen have been ordered to evacuate immediately. A temporary evacuation point has been set up at Porterville...
TULARE COUNTY, CA・1 DAY AGO
ABC30 Central Valley

FRESNO, Calif. (KFSN) -- CAL FIRE crews battled a brush fire in the area of Fresno's Woodward Park on Sunday afternoon. According to fire officials, the flames were burning brush and grass and spread to 42 1/2 acres, fanned by winds. The fire sparked near the San Joaquin River in...
FRESNO, CA・19 HOURS AGO
ABC30 Central Valley

A 22-year-old man is in critical condition after he was found shot in the head in southwest Fresno.
FRESNO, CA・2 DAYS AGO
ABC30 Central Valley

Ignacio Lopez, 37, was convicted of premeditated attempted murder of a peace officer, assault on a peace officer with a semi-automatic firearm and conspiracy to commit a bank robbery.
TULARE, CA・4 DAYS AGO
ABC30 Central Valley

Police have arrested a 19-year-old man who allegedly shot his mother's boyfriend at an apartment complex in east central Fresno.
FRESNO, CA・4 DAYS AGO