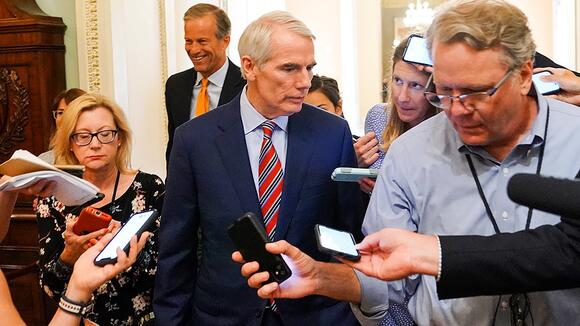 A bipartisan Senate infrastructure group is struggling to break an entrenched stalemate over the final details of their $1.2 trillion proposal, sparking an increasingly public blame game between Democrats and Republicans.

The bipartisan group had hoped to return to Washington on Monday with a final agreement in order to quickly start debate on the Senate floor. Instead, the talks appear to be on shaky grounds, with each side accusing the other of moving the goalposts.

A Democratic source close to the talks said on Monday morning that Democratic negotiators and the White House had made a "global offer" to Republicans on Sunday night that would have addressed a number of unresolved issues.

But Republicans appear to be rejecting that offer, arguing that it goes back on details that had already been agreed to by the bipartisan group during their weeks of closed-door negotiations.

“The ‘global offer’ we received from the White House and Chuck Schumer was discouraging since it attempts to reopen numerous issues the bipartisan group had already agreed to," said a GOP source familiar with the talks.

“If this is going to be successful, the White House will need to show more flexibility as Republicans have done and listen to the members of the group that produced this framework," the source added.

The back-and-forth is a U-turn from just Sunday, when Sens. Mark Warner (D-Va.) and Rob Portman (R-Ohio) both predicted that the deal was largely in hand and could be ready to go by this week.

Portman said during an interview with ABC News that they were "about 90 percent of the way there," while Warner suggested to Fox News that the group could be ready to go on Monday.

And 11 GOP senators previously wrote to Senate Majority Leader Charles Schumer (D-N.Y.) late last week indicating that they could be ready to start debate as soon as Monday.

Now the group appears nearly certain to miss that goal amid rising tensions and fresh questions about if the talks could collapse altogether. The core group of 10 Senate negotiators, including Portman and Warner, are expected to meet again on Monday to try to break the stalemate.

Sticking points are piling up.

Portman, during the ABC News interview, pointed to transit as the main unresolved issue.

But sources pointed to a laundry list of other unresolved points of contention, including money for broadband, highways and bridges, using unspent COVID-19 relief funds to help pay for the bipartisan deal and Republicans wanting to waive federally mandated wage requirements for federally funded projects.

The Democratic source close to the talks said on Monday that Democrats had agreed to accept the GOP offer on highways as long as Republicans moved toward their position on transit. But Republicans don't appear likely to accept that, with the GOP source countering that they had made an offer on transit on Wednesday and were "met with silence for three days."

Democrats have also raised concerns that the bipartisan deal wouldn't fully fund a water bill previously passed by the Senate or provide an additional $15 billion for treating water contamination caused by lead pipes and accused Republicans of proposing something "completely unworkable."

After Democrats accused Sen. Mitt Romney (R-Utah), one of the negotiators, of walking away from a deal on the water funding portion, describing it as "goalposts moving," Romney's office called the accusation "laughably false" and accused Schumer of requesting an additional $15 billion in funding.

"This is a direct violation of the bipartisan agreement," they added.

The bipartisan deal is at the center of Biden and Senate Democrats' infrastructure strategy, with the president joining the Senate negotiators at the White House last month to say they had reached an agreement on a framework for a bill that would cost $1.2 trillion over eight years.

Schumer has pledged to hold a vote on the bipartisan deal and a budget resolution that greenlights a separate $3.5 trillion plan that Democrats are expected to pass along party lines before letting the Senate leave for a weeks-long summer break.

That recess had been expected to start on Aug. 9, but senators have warned they could lose at least the first week as talks drag on.

Meanwhile, former President Trump , who maintains a tight grip on the party's base, is publicly pushing Republicans to reject the bipartisan agreement and hold off on cutting a deal until they are back in the majority.

"Senate Republicans are being absolutely savaged by Democrats on the so-called 'bipartisan' infrastructure bill. Mitch McConnell and his small group of RINOs wants nothing more than to get a deal done at any cost to prove that he can work with the Radical Left Democrats," Trump said in a statement, adding that Republicans shouldn't let Democrats "play you for weak fools and losers!"

President Biden's two major economic agenda items hang in the balance this week as Democrats continue "intense discussions" on their $3.5 trillion spending plan and some Republicans are warning that their support for the $1 trillion bipartisan infrastructure bill could evaporate Democrats ‘linked’ it with reconciliation. "It's gotten completely off...
CONGRESS & COURTS・22 HOURS AGO
Axios

President Biden failed to persuade Sen. Joe Manchin (D-W.Va.) to agree to spending $3.5 trillion on the Democrats' budget reconciliation package during their Oval Office meeting on Wednesday, people familiar with the matter tell Axios. Why it matters: Defying a president from his own party — face-to-face — is the...
CONGRESS & COURTS・2 DAYS AGO
CBS Austin

WASHINGTON (SBG) - Republicans say there is no way they will join to raise or suspend the debt ceiling, increasing the legal limit on the total amount of debt lawmakers borrow. “This is a unified Democrat government engaging in a partisan reckless tax spending spree. They will have to raise...
CONGRESS & COURTS・1 DAY AGO
Shore News Network

The House Committee on Energy and Commerce rejected a key drug pricing control bill in a stunning rebuke of House Speaker Nancy Pelosi and Democratic leadership. Democratic Reps. Kurt Schrader, Scott Peters and Kathleen Rice voted alongside their Republican colleagues on the panel, creating a 29-29 tie on the vote to pass the legislation during a committee hearing Wednesday. The hearing was held to mark up parts of Democrats’ sweeping $3.5 trillion budget reconciliation package, the Build Back Better Act.
CONGRESS & COURTS・2 DAYS AGO

The two senators met Tuesday afternoon, after McConnell promised that no Republicans would support the legislation.
CONGRESS & COURTS・1 DAY AGO
USA TODAY

Congress returns Monday facing decisions on voting rights, infrastructure and social programs while needing to raise how much the country can borrow.
CONGRESS & COURTS・3 HOURS AGO
WashingtonExaminer

US lawmakers will dive into the busiest legislative period in years in the coming week, with President Joe Biden counting on a united front from Democrats to pass make-or-break spending bills that he hopes will improve his sagging approval ratings.  Biden said in a speech Thursday he was confident Congress would pass the plan, characterizing it as a moment that could "change the trajectory of our country for years or decades to come."
CONGRESS & COURTS・10 HOURS AGO

While Republicans are blaming Democrats for reckless spending, about $7.8 trillion of the overall national debt was accumulated under President Donald Trump.
PRESIDENTIAL ELECTION・2 DAYS AGO
Washington Times

House Transportation Committee Chairman Peter DeFazio is being accused of breaking a key pledge that President Biden made to Senate lawmakers to secure passage of his bipartisan $1.2 infrastructure bill. Mr. DeFazio, Oregon Democrat, is maneuvering to include pet projects and partisan priorities within Mr. Biden‘s $3.5 trillion expansion of...
CONGRESS & COURTS・2 DAYS AGO
Business Insider

McConnell is determined to resist Democratic pressure to raise the debt ceiling alongside them. The showdown could derail the economic recovery.
CONGRESS & COURTS・3 DAYS AGO
POLITICO

Democrats want the president more involved as trillions of dollars in spending, plus the nation's credit and government funding, hang in the balance.
CONGRESS & COURTS・2 DAYS AGO

President Biden failed to persuade Sen. Joe Manchin to agree to spend $3.5 trillion on the Democrats’ budget reconciliation package during their Oval Office meeting on Wednesday, people familiar with the matter told Axios. Defying a president from his own party — face-to-face — is the strongest indication yet Manchin...
CONGRESS & COURTS・1 DAY AGO
WashingtonExaminer

The House will vote next week on a major funding bill that combines federal government spending with emergency money for Afghan refugees and states hit hard by summer flooding and hurricanes.
CONGRESS & COURTS・1 DAY AGO
Washington Post

Joe Manchin gets all the attention. But Kyrsten Sinema could be an even bigger obstacle for Democrats’ spending plans.

Senate Democrats were riding high on the afternoon of July 28: A long-delayed bipartisan infrastructure package had finally come together, with many senators eager to finish that bill and move forward with a multitrillion-dollar piece of economic, climate and social legislation — President Biden’s signature “Build Back Better” plan. But...
CONGRESS & COURTS・3 DAYS AGO
CBS News

The debt limit was part of a call between Treasury Secretary Janet Yellen and Senate Minority Leader Mitch McConnell on Wednesday, a person familiar with the conversation told CBS News. As the U.S. barrels closer toward running out the cash to pay its bills, Yellen has warned inaction would lead to catastrophic economic consequences.
CONGRESS & COURTS・2 DAYS AGO

DENVER—Colorado U.S. Senator Michael Bennet joined a group of senators in writing the Biden administration to urge them to implement the wildland firefighter pay and personnel provisions into the Infrastructure Investment and Jobs Act. While battling historic wildfires across the West, federal firefighting agencies are facing major staffing shortfalls due...
PRESIDENTIAL ELECTION・2 DAYS AGO
POLITICO

Lobbyists for business interests are confident they can fight off parts of House tax proposal they find most threatening.
AGRICULTURE・2 DAYS AGO
goldrushcam.com

Senate Democrats and Republicans are still trying to iron out their differences over President Joe Biden's infrastructure plan. In the 50-50 Senate, and with Republican support unlikely, all Democrats must be on board to pass the ambitious $3.5 trillion budget proposal.
PRESIDENTIAL ELECTION・5 DAYS AGO